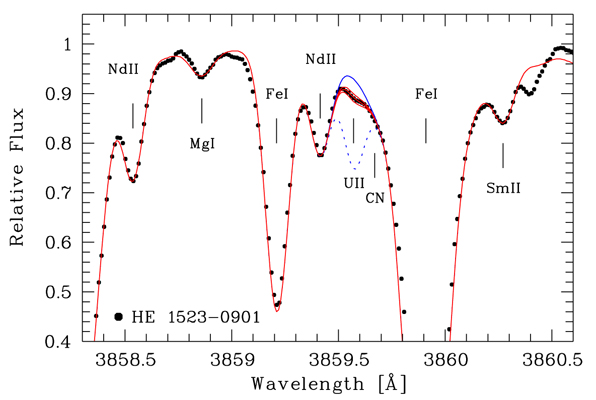 When trying to date a star, many websites state the problem is often best to approached with sweet words, lots of bling, and paparazzi repellent. A stint in the right rehab facility might increase your odds of success, and playing sports professionally has also worked for many individuals. To my mind, however, if you want to date a star, you need a good spectrograph, a multi-meter telescope, and a few clear dark nights. Any star worth dating can be had with this technique if the skies are right.

Seriously though, trying to determine the formation date of a stellar object is tricky business, and the best direct method we have involves studying the ratios of different nuclear isotopes in stellar atmospheres. Called nucleo-chronometry, this process first asks “In what ratio where all the elements in this star formed?”, and then looks to see in what ratios those elements are actually observed. In a perfect universe, there will be a baseline distribution of stable elements that appear in textbook perfect ratios side by side with unstable elements with long but varied half-lifes. It is this combination of different decay rates that allow the star’s age to be determined. For instance, if a star was expected to form with some amount A of element Fo* and some amount B of element Fi* (where Fo has a half life of 1 billion years, and Fi has a half life of 3 billion years), than after 3 billion years, we’d expect to see only only 1/2^3 A= 1/8 A of element Fo and 1/2 B of element Fi. Only one element is required to get a rough estimate of how old a star is – in fact carbon dating uses just the element Carbon-14 to measure the age of old organic materials – but more reliable results come from looking at more then one element.

This technique was recently used to identify a population III star likely from about the first generation of low mass stars, that was born roughly 13.2 billion years. This star, named HE 1523-0901, is perhaps the oldest known star in our galaxy. At first glance, this is just another story of someone going, “Oh neat, an extreme,” but the reality is, determining the age of a star is a real bear, and, in many cases, it just isn’t possible. This piece of research, lead by A. Frebel of my graduate alma mata the University of Texas, and including T. Beers, my undergraduate advisor at M.S.U., required a lot of hard work, and 7.5 hours on the ESO’s Very Large Telescope in Chile.

On paper (or at least on the computer screen), this process sounds pretty straight forward, but in reality it is a messy problem. Observationally, nucleo-chronometry is challenging because it requires high quality (specifically high signal-to-noise) high resolution spectroscopy. In plain English, the light from the star has to get spread into an extremely long and bright rainbow that allows astronomers to study the specific shades of color that correspond to the electron energy levels in different isotopes of atoms. This can be done with the brightest stars without a lot of pain using couple-meter telescopes. To look at faint stars (in other words, most stars), many-meter behemoth telescopes and long exposure times are required. This is hard work, requires good observing conditions, and the data reduction is something known to make graduate students (including myself) want to throw things. The results are worth it, but it can take as long to acquire and reduce the data as it does to measure the elements in the data.

Obtaining and quantifying the data aren’t the only difficulties. Stars are created out of recycled materials, and one star may have had a dozen different types of supernovae, each with their own element distributions, in its ancestry. Star’s atmospheres can also be altered, either (in the case of extremely low mass stars) through mixing of internally enriched materials, or via mass transfer from a nearby star (where mass transfer may be just a nearby red supergiant undergoing normal mass loss that falls onto the star being observed). When looking at the atmosphere to determine age, one must have some sense of what is original, what should have been their originally, and what if anything ended up there after the fact.

This is good science that only comes from whatever one calls the typing equivalent of elbow grease.

But, this is also the type of work that Frebel and her team did. They were able to determine age estimations using 7 different atomic ratios. Having done my own painful share of isotopic measurements, my hat is totally off to these guys for this clean bit of science. They successfully dated the oldest star around – no bling required.

I could insert a joke about how this is harder than getting a date with Paris Hilton or Britney Spears, but… That would just be google fodder.

*Elements Fo and Fi are just made up