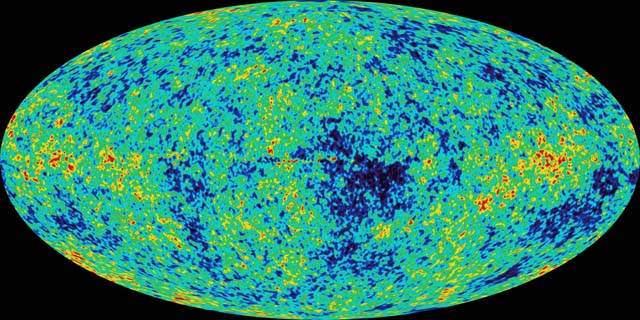 Okay, so that last one is an exaggeration. As far as I know, human babies and the CMB have nothing in common. The remark about the Oort Cloud, however, may not always be as far fetched as it sounds. A group of scientists working at the Harvard-Smithsonian Center for Astrophysics, and lead by David Babich, have theorized a new technique for determining the mass distribution in the Oort cloud using distortions in the Cosmic Microwave Background.

According to the theories of Babich and his team, if you observe the light of the CMB through the Oort cloud, the intensity you detect is related to both how much CMB light is blocked by Oort cloud objects (which are so small and so far away that you can look through them the way you look though a cloud of fine dust), and to how much light the Oort cloud objects emit at the color being observed (in this case, the dust you are looking though is made of glow in the dark paint). If the Oort cloud isn’t symmetrical, any distortions may be visible as anisotropies in the light of the CMB.

The key to understanding this result is understanding that warm objects give off light in a variety of colors. The hotter an object is, the shorter the wavelength of the light – the bluer the light. The colder an object, the longer or redder the light will be. Humans, for instance, give off the most light in infrared. That doesn’t mean we give off all our light in any one specific wavelength of infrared. Rather, we give off most of our light in one shade of color, but there is light of a variety of colors coming from our warm bodies, even in the darkest of rooms (although some colors, like green, aren’t emitted in numbers enough higher than zero to matter).

The CMB is basically a perfect black body with a temperature of 2.728 Kelvin. It is located at essentially infinity in all direction. It is a perfect background light. This team theorizes that objects in the Oort Cloud should have temperatures related to their distances, such that an object at 1000 AU would have a temperature of 8.5 K and nearer objects would be hotter while farther objects are colder (think of the temperatures of rocks illuminated by a camp fire. The same physics describes the heat of the rocks and of the objects in the Oort Cloud. These temperatures are very similar, and the same technology that can be used to detect the CMB will also detect the heat signature of Oort cloud objects.

So, while the 2.728 K CMB and 8.5 K Oort cloud objects both emit microwave light, the light doesn’t peak at the exact same color, although there is overlap. Despite the amazing precision that WMAP and other missions have already mapped the CMB, their accuracies weren’t sufficient to test this theory, but this is something that future missions, like Planck, may be able to. Any distortions in the Oort cloud that are found will point to past encounters with stars. As our Solar System passes near other stars on its orbit through the galaxy, the Oort cloud gets distorted and these distortions trigger long period comets.

Good theories, in my mind, are defined as theories come in to forms. There are those, relativity, that put existing observations together in a new way that leads to deeper understanding and understanding of previous mysteries, while also making predictions. There are also good theories that look at the universe and apply existing knowledge to predict future discoveries we can’t get to through more common means. This set of papers falls in that second category. This isn’t theory for the sake of pretty math – this is theory that defines how to build a better mouse trap.