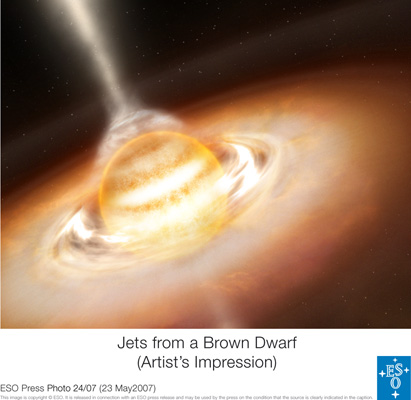 Opening my press release email folder this morning, I found what could have been the beginning of a good joke if I were actually a skilled humorist. So a black hole and a brown dwarf both start to form. As the black hole consumes his parent star, he shots powerful gamma ray jets off to announce his arrival. At the same time, a little brown dwarf, with a not so little planet, works to spring out of its proto-stellar cloud, and it blows with its feeble little jets as hard as it can to announce its arrival. The black hole looks at the brown dwarf and laughs and says “[insert something witty and demeaning]”. The brown dwarf, not one to be discouraged, just smiles and states “[Something thoughtful and witty that puts the black hole in his place]”

Not being a good humorist, I will not try to fill in the blanks. I will simply work to explain how two such very different objects can announce their formation via the same physical process.

Astrophysical jets are a by product of magnetic fields, and magnetic fields are generally a by product of charged particles moving. For instance, if you wrap a bunch of wire into a loop, and connect it to a battery, the current through the loop (the charges moving though the loop) will turn your loop of wire into a magnet strong enough to deflect a compass needle, and maybe even to make a small engine.

In astrophysical situations, charged particles (for instance, ionized atoms), move in different situations and create their own magnetic fields. For instance, in accretion disks, lots of particles are confined to orbits in a flat pancake of material, and these orbital paths act (in a college physics without calculus, cows are spheres, approximation) like the current in your coiled wire.

If you use a compass to explore the direction of the magnetic field associated with a coil, you’ll find that the N-S axis goes though the center of the loop perpendicular to the loop. This is the same orientation as astrophysical magnetic fields.

So where do jets come in? Well, as some of my students demonstrated for me, that coil can get things moving if it wants to! If you take large diameter wire and wrap it around small diameter PVC pipe, you can build something called a Coil Gun. I’d recommend something like 50 ft of 10 gauge insulated wire around a 3/4-inch PVC. This worked really well for some of my students (see Video). Now find yourself the largest power source you can that is Direct Current (I used the portable battery for jump starting cars that was in my trunk, my students daisy chained drill batteries). Drop a magnet into the PVC and flick the connection on and off (you want to create a burst of magnetic field). If all goes well, the magnets will get flung out one end of the PVC or the other (it all depends on which way is the fields North, and which way is the magnet’s North.

So, the accretion disk acts like your coil and material trying to get into the center can gets flung out by the magnetic field just like your magnet got flung out. To first approximation.

To make your coil gun more dangerous, you need only increase the current (bigger battery, or preferably a bank of capacitors you can charge in parallel and discharge in series) and increase the number of coils. By maximizing both these things you can create a fairly good weapon.

The universe can do the same thing by increasing the size of the disk and increasing the orbital velocities of the charged particles. Small, slow disk = Small sad jets. Large, high velocity disk = jets to be feared.

Today’s press feed offered both the scenarios in two separate stories. Astronomers lead by Emma Whelan used the Very Large Telescope in Chile to image a very low mass brown dwarf with small jets. This object, named 2MASS1207-3932, is about 24 Jupiter masses and has a 5 Jupiter mass companion (I say companion because I don’t know if their formation resembled that of two binary stars or a planet and star, so I have no idea would nouns to use). This little almost-a-star’s jets are about 1 billion kilometers long and the material in the jets is moving at a few kilometres per second (a speed man-made rockets can attain). This is only the second brown dwarf found to have jets, it is the smallest star found to have jets. The fact that such tiny failed stars have jets while forming raises the possibility that gas giant planets may also go through a phase of having jets during their formation.

On the other end of the size scale, astronomers lead by Hans Krimm have used the Swift satellite to figure out that long duration gamma-ray bursts (those associated with a special class of supernovae) have continued X-Ray flare activity for several minutes to hours after the initial gamma ray burst. The physical picture of the event looks something like this: A giant star runs out of material to fuse into heavy elements (namely Iron in the core), and when the fusion shuts off, there is no longer sufficient radiation pressure (pressure from the light created in the nuclear reactions) to support the out layers of the star. The star had been rotating, and when the outer layers – now unsupported – collapse inward, they collapse somewhat into a disk. Magnetic fields channel some of the material in this collapsing disk out in jets. The whole process is short lived, but it sputters out rather then cleanly coming to an end. Initially, when the disk would have the most food to offer the forming forming black hole that is where the star’s core used to be, the jets are emitting in a few seconds as much energy as the Sun will emit in its entire lifetime. When this jet material hits shells of ejected material, gamma rays are given off. The jets in this case are moving at near light speed! This initial gamma ray burst will general last a few 10s of seconds to in rare cases a few hundreds of seconds. Over the subsequent several minutes or hours, additional X-ray flares may also be observed. By studying the X-ray flares associated with GRB 060714, Krimm and his team determined they were likely caused by subsequent infall of material and associated emission as the star’s material continues to build the black hole.

In both cases the jets were related to formation of a new object, and the physics in both situations was similar. The differences come out of the details. As with almost everything in astronomy, it all comes down to the mass. Small objects have small jets, and giant objects have dangerous jets. And luckily, none of these jets are pointed at us.