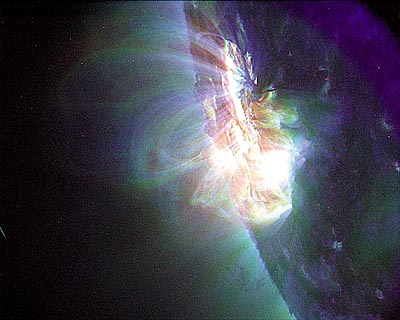 Anyone living in the extreme Northern or Southern latitudes has at one point or another looked up at night and seen the sky awash in color. Called the Aurora Borealis and Aurora Australis respectively, these natural-light shows are a by-product of material from the Sun hitting our atmosphere. Thinking back, high latitude denizens may remember some particular year when the aurorae were particularly amazing, and odds are that year was (give or take a year) some multiple of about 11 years before the year 2000; the year of the Sun’s last solar maxima. (For instance, some of you may remember solar storms between 1989 and 1991 that not only created dramatic aurora, but also caused several power failures in Canada and Sweden.) Our Sun has an 11 year sunspot cycle, and the maximum of this cycle also corresponds to a maxima in solar storms. These truly hazardous-to-electronics storms are dramatized in the new “The Universe” series as being a real threat to astronauts and satellites, and the hazards the show portrays aren’t unrealistic. As the Earth prepares to face the next solar maximum around 2011, we are also trying to find ways to predict hazards the Sun may be sending our way. (image credit: TRACE)

At the summer meeting of the AAS in Hawaii last week, one scientist presented one possible way we can know when we just might be in trouble.

First let me set the stage. Ever since the time of Galileo, people have been pointing telescopes at the Sun and projecting solar images onto walls, pieces of paper, and other surfaces that hopefully don’t set fire (Never look directly at the Sun with or without a telescope unless you are using special filters that are marketed for looking at the Sun!). In looking at the Sun, it was noticed first by Galileo, and subsequently by many others, that the Sun’s surface often has small defects that appear darker than surrounding material (although they are actually still giving off light). These defects are named sunspots, and people have gotten into the habit of tracking them, counting them, tracing them on paper, and otherwise recording them over time. In the couple hundred years of data we now have, it is clearly evident that the Sun has a roughly 11 year sunspot cycle that isn’t always constant, does turn off occasionally (e.g. the Mauder Minimum from 1645 to 1715, during which almost no sunspots were observed), and sometimes (such as the historic 1958 solar max) creates 150-200 sunspots in a single year.

Overlaid on top of the sunspot cycle is the cycle of aurora. While it is possible to observe extremely bright aurora during any year (the most amazing show I saw was in 2004, and corresponding to nothing in the solar cycle), the number of aurora tracks with the solar cycle, with the most aurora and the most sunspots appearing at coincident times. This occurs because both features are driven by the Sun’s magnetic field. Admittedly, no one fully understands the magnetic field of the Sun, but we do have some clear observations that demonstrate linkages. For instance, sunspots generally appear in pairs, with northern and southern magnetic poles being associated with separate spots. We also observe magnetic flux tubes, which appear as coils of plasma forming giant versions of the St. Louis Arch. When these flux tubes get pulled too taunt, they snap, releasing huge amounts of energy into the Sun’s chromosphere and corona. Sometimes, these snapping arcs send particles – electrons, protons, and some random atoms like helium – streaming toward the Earth at high velocities. These events are called Coronal Mass Ejections (CMEs).

Since light travels at, well, the speed of light, we know about CMEs about 8 minutes after they occur. The particles, if they are ejected toward the Earth, will arrive any where from 18 hours to a few days later. Depending on their speed and their number, these particles can actually create anything from pretty aurora to deadly particle storms that destroy satellites and endanger astronauts. Predicting which CMEs will produce particle storms and which won’t would allow satellite operators to know when they should put their satellites into safe mode and when astronauts should be sent into safety areas on the space station. Knowing when particle storms are coming will also help power companies know when they need to keep an extra close eye on their power grids, and will tell photographers when to get their cameras set up to catch a special night of dancing celestial lights.

So how do we know when a breaking arc will and will not produce particle storms? This is where Nat Gopalswamy (NASA Goddard) comes in. During a press conference at the AAS meeting in Hawaii last week, he announced that work he and collaborators had done showed that when CMEs are detected in the radio (are radio loud) particle storms are almost certain to follow. Radio quiet CMEs, however, aren’t (at least in the 186 that were observed) accompanied by particle storms.

So, now we know. When you see a CME with your eyes and hear it with your radio (or at least a radio specially tuned for this), tell the astronauts, satellites, and power grids to duck and cover.

This is a particularly timely understanding. Currently we are at solar minimum, and a quick tour of spaceweather.com shows nothing much. Come 2011, however, NASA scientists are predicting a solar max unlike anything that has been seen since the dawn (or at least late morning) of the space race. Specifically, the next solar max is expected to be stronger than any maximum since 1958. In today’s modern GPS driven, satellite phone sometimes totting, Direct TV watching, satellite united society, any loss of satellites could cause massive disruptions to both day-to-day life and the economy. In the long run, it is better to know a particle storm is coming and shut everything down for a few hours (and inconvenience everyone for a few hours), then not to know anything is coming and lose the satellites permanently.

And for those of you curious about what is coming, Space Weather offers constantly updated alerts and predictions. For those of you wanting to hear about past destruction wreaked by sun storms, watch “Secret’s of the Sun” only on the History Channel.