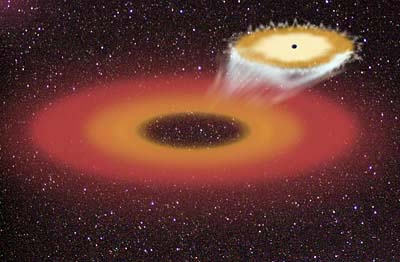 Last week at the AAS there was a press conference focused on how super massive black holes interact during galaxy mergers and why/how black holes aren’t ejected during mergers. That press conference highlighted the work of University of Maryland researchers lead by Chris Reynolds that took into careful account the spin of the black holes and the angles between the merging black holes’ axes of rotation. Observational data mining by University of Texas researchers lead by Greg Shields was also discussed.

Today I got a press release that started, “Scientists have discovered for the first time just how fast a supermassive black hole can be thrown from a galaxy when it merges with another black hole. The crucial factor in producing large “kicks” turns out to be the spin that the black holes carry prior to the merger.

I read this, checked the date, checked the author list, and decided great things can be independently discovered in ways that lead to much press release silliness.

Manuela Campanelli and her team at Rochester Institute of Technology did what on an initial read looks very similar to the initial modeling done by Reynolds team and obtained similar results. The results diverge in where they go next. While Reynolds team said “We have these predictions but we don’t see any black holes actually getting kicked out – let’s figure out why?” Campanelli’s team has left that discussion for either future work or a press release I haven’t yet received.

I guess great minds truly do think a like, great press officers release a like, and scientists really don’t pay attention to the stuff we are covering in the media.