Most Massive Star Ever Weighed 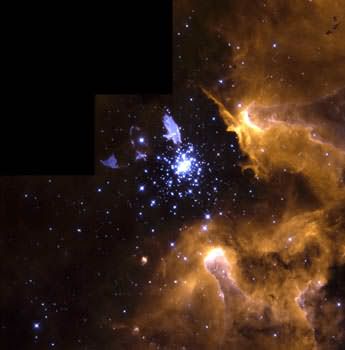 The only time astronomers can determine stellar or planetary masses with any certainty is when the stars or planets occur in systems that are aligned such that we can measure both their velocities using spectra, and we can observe the objects eclipsing one another. Today, a team of astronomers lead by Anthony Moffat (Universite de Montreal) announced they had found the most massive star ever identified. Weighing in at 114 Solar Masses, it is roughly 30 solar masses larger than any previously identified star, and it shares a binary star system with an 84 solar mass star. Looking at these two super luminous stars with their Wolf-Rayet like emissions, astronomers are looking at the site of what may become a black hole – black hole binary system. Maybe.

Super massive stars are rare and short lived, and they are getting more rare every eon. At a certain mass, the nuclear reactions in the core of the star create so much light that the star is actually blown apart by the light (by radiation pressure) more powerfully than the star is held together gravitationally. The effectiveness with which light can blow a star apart is directly related to how much metal the star contains. In the early universe, when metals were more than rare, stars may have grown to a couple hundred solar masses. As successive generations of stars have enriched the universe, the most massive stars have shrank and the universe’s ability to create planets has increased.

These two newly discovered supermassive stars are in the nebula NGC 3603 may mark the upper boundary of what is possible. These stars are will undergo massive amounts of mass loss and will quickly burn through the elements, burning hydrogen through Carbon essentially simultaneously in their cores. The actual mass loss rates will determine if the stars blow themselves to dust, leaving nothing behind, or will blow up and leave behind a black hole or neutron star.

The fate of the binary system will also, in part, be determined by how mass is exchanged between the systems, and how the shock of which ever star explodes first effects the other star.

No matter what its future, it is cool to mentally follow the scientific ‘what if’s to imagine the carnage that will someday mark the location of the two newly understood stars.