The Universe: The Red Planet 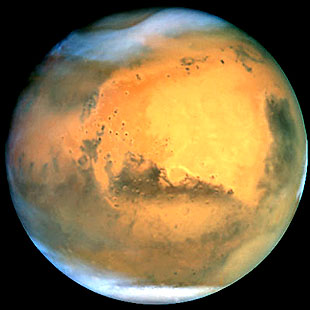 I just finished watching this week’s episode of “The Universe.” As its name, The Red Planet, implies, this episode focused on the forth planet from the Sun: Mars. It took a systematic journey through our understanding of Mars that included historical perspectives and modern space based explorations.

One of the things it particularly emphasized (that I don’t think is generally talked about enough) is the importance of a magnetic field in maintaining a planetary atmosphere.

The Earth, which still has its atmosphere, is significantly larger than Mars, and we are still cooling off as a planet. Once upon a time, our world was so hot that volcanoes were going off all around the globe, and the material they threw into the atmosphere settled into a noticeable layer of soot. Today, our world is a bit calmer, a bit cooler, and a bit less messy. Given enough time, volcanism may die out altogether as our planet cools and its liquid iron core solidifies. When that happens, our planet’s magnetic field will also die down and the magnetosphere will disappear.

To get a picture of what this means, we need only look one world out. Mars already cooled off and lost its magnetic field. Here on Earth, when the solar wind hits our magnetosphere or when a coronal mass ejection blasts our way, nothing too exciting generally happens. There will be pretty aurorae, and sometimes the ionosphere will bloat in size and a few satellites or a part of the power grid will get knocked out. While bad, these things inconvenience civilization more than they effect the ability of life to live on. On Mars, the solar wind and CMEs just blast Mars’ atmosphere away. This means Mars is losing its atmosphere for multiple reasons: it gravitationally can’t hold on to warm, fast moving gas particles, and the Sun is blasting away gas particles that aren’t moving fast enough to escape on their own.

. It talks about how it is possible to slowly add oxygen to Mars over generations by introducing specially selected and sometimes engineered plants. Unfortunately, without being able to put back the planet’s magnetosphere, the Red Planet’s surface will always suffer from high radiation levels and will remain dangerous for DNA-based many celled organisms.

Let’s hope the Earth takes its own sweet time cooling off.

One final word on “The Universe: The Red Planet”: I have to say this second episode was much better than the first episode in terms of pacing and use of graphics. It was an amazing example of what a good production team can do with access to NASA multimedia and some really good talking heads. There was one humorous moment when they had some rather confusing verb tenses for the planned 2007 summer launch of Phoenix. It was clear they planned to air the episode after the summer and after the launch. Oh well – these are the risks of trying to write on the cutting edge. Still, it was good, and I recommend giving it a watch. Click here or check your local listings to find out when it is airing on The History Channel in your time zone.