The Space Station,
The Space Shuttle, and
Their Construction Workers 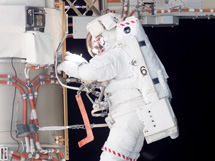 One of the things that NASA and the Russian Federal Space Agency have each proven over and over again is that astro/cosmonauts are the best construction workers in and off this world. In my mind, there is only one reason for us to send people into space for non-commercial purposes is to build or repair things.

These belief leaves me with very mixed emotions right now.

I am incredibly proud folks currently orbiting the Earth. These ten * This baker’s dozen brave men and woman have dealt with an incredible amount of stress this week, ranging from a false fire alarm, to a (apparently) false wing impact, to a very real failure of all navigation and environmental computers, to a peeled up section of thermal insulating quilt.

That is what I think everyone can agree is a bad and stressful week.

But, while the space station sure threatened to not reboot, the cosmonauts managed to find just the right combination of buttons to press and switches to switch to get the computers (as of this writing) to function well enough once again. And, while the space shuttle’s blanket got mucked up, astronauts managed to sew and staple things back into place. Everything has been put back, as good as it gets, under the hardest possible circumstance.

Give an astro/cosmonaut a Space Shuttle, and they can get to space. Give a group of astro/cosmonauts an education in science and engineering, and the can repair a space shuttle, space station, and even (just not this mission) the Hubble Space Telescope.

So, we have identified what astro/cosmonauts are best at. The question is, what have we tasked them with? Well, building a space station and repairing (but not this mission) the Hubble Space Telescope. But once the Space Station is complete, what are we tasking them with? Science. Science that could be done, to the best of my knowledge, with robotic space missions.

So why are we building the Space Station? To keep our promises with our international collaboration. To build lasting relationships with the space agencies of the world. To give astro/cosmonauts jobs? And because it inspires people to see representatives of our civilization traveling to and working in space.

These are all important things, but I’m starting to lose faith in the dream of NASA’s manned space program. I look out at all the commercial space programs (see Private Space Flight), and I see a model for manned space flight that I love.

One of the problems with NASA is that it’s budget is at the whim of the president and congress. While a company has to be responsible to its stock holders, and must stick to its business plan and turn a profit, NASA can have it’s entire program radically changed by a presidential speech. Yes, companies do have changes in direction and business model, and they do sometimes happen overnight, but…

But NASA gets mucked with a lot by presidents and congress and the public who say “Ooooo, people in space” and then say “Show me pretty pictures! Put cute robots on Mars!”

My vote, give up on the space station and privatize it (this will n-e-v-e-r happen), replace the space shuttle with some new form of space age pickup truck, and keep using the astro/cosmonauts as construction workers. Let them fix things, build things, and test things, but don’t make them live up there in improper housing.

And let Bigelow build their hotel and Virgin Galactic take men and women on quick jaunts into space.

*For some reason I though Atlantis had a crew of 8+2 Space Station replacements and the space station had 3 people. Turns out it is 5+2 and 3. Thanks for the catch Kevin!