The Universe: Death, Destruction, and the Planet Jupiter 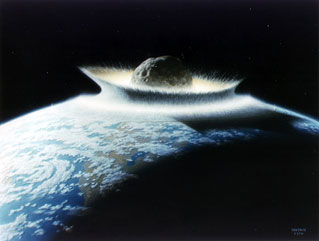 So, I have to admit to being a bit remiss in blogging about the Universe series. I have a reasonably good reason: I like my husband. That may sound like a non sequitur, but you need to understand that after dating a long series of science and engineering types who all thought astronomy was great, I decided I needed to date someone who recognized astronomy could be cool, but just wasn’t all that into it. This change in strategy worked, and the first non-science and engineering doing, astronomy non-loving person I dated I ended up marrying. He is totally into blues guitars, works as a software guru doing work that in no way overlaps anything I use computers to do, and we are very happy. Unfortunately, since he really doesn’t care about astronomy, he really has no interest in watching “The Universe” with me. Robot Chicken just keeps winning over science. (Image credit: Don Davis / NASA)

So, I had to find a few hours when we weren’t both watching the TV together to try and watch “The Universe.” I hate to admit it, but the first spare hour I found, I totally fell asleep watching the episode “The End of the Earth” after doing a day’s hard yard work. Yesterday, I finally got around to watching two episodes, the end of the Earth episode as well as “Jupiter: The Giant Planet.”

Watching the shows in quick succession I had three thoughts: 1) It is always risky to talk about current events in things that are getting produced on either a magazine or television time scale, 2) if you are working on a small budget you can go a long long way using graphics available in press releases and from astronomy education materials, and 3) if you want to sell a television show, life finding or life killing science may be the best direction to go.

For instance, both NOVA Science Now and “The Universe” jumped on the Asteroid Apophis bandwagon. While NASA sees no risk of impact, giving Apophis a ranking of 0 on the Torino Scale, the fact that the asteroid will pass within 0.5 Earth Radii of the Earth is scary if you don’t understand orbital mechanics. This is, after all, an asteroid 250 meters across that will be about the same distance from the surface of the Earth as Boston is from Austin! Now, while I know we will be safe, just like I know roller coaster rides are safe, I can see the fear factor. The planet Earth is essentially playing chicken with an asteroid. Still, it is scientifically irresponsible to scare the shit out of the public. But, well, it sells. And back when the show was still in production, maybe, the astronomy community still didn’t know what would happen for certain. Maybe?

All that aside, I have to totally admit to being in awe of how far this series is able to run with freely available media. Many universities, astronomy centers, and of course NASA sink lots of money and effort into creating amazing graphics and animations. Often, these materials get used in press releases and in stories about the press releases. The lucky image makes it into a feature magazine story or into a text book, and sometimes the media will even land in a science special. The producers of the Universe have taken the best of many of these images and movies and composed them in multimedia frenzy geared to sate the flash-flash-flash desires of the video game generation. While they are producing some of their own animations to specifically match some of the words and actions of the talking heads, they likely saved a LOT of money on graphics. If Astronomy Cast ever has the monetary base for us to try vodcasting again*, I’m going to need to learn from the media re-purposing ways of “The Universe.”

So, having covered thoughts 1 and 2, this brings me to thought 3: speculative science sells. There may be life on other worlds! (Did that catch your attention?) The effects of Dark Energy may shred everything – even planets and life forms! (Surely that caught your attention?) Exploding stars could destroy the Earth! (but really, we don’t know of any that might decide to take this option in this corner of the universe). Again, I’m a bit concerned that we’re scaring the public without need. Yes, the universe will probably tear itself apart in the far distant future if the amount of Dark Energy per unit volume stays constant as the total volume of the universe increases. But, this is a long long time in the future, and perhaps it would make more since to discuss in terms of “How the Universe will end” instead of “The End of the Earth.” The Earth will be way dead well before the expansion of the universe may tear planets apart (and really, this is speculative at this point).

But… If you want to sell astronomy, you have to have an angle, a pitch, a twist that will get people to tune in. Astronomy enthusiasts aren’t all that large a group, and even if you got every professional and amateur astronomer and astronomy communicator and educator in America to tune in, this isn’t really a large enough audience to get an advertiser interested in paying the big bucks demanded of TV. To get non-astronomy lovers to tune in, something more is needed. NOVA does it. The Universe does it. I just hope I figure out how to sell a book without having to find and angle that includes scaring people with things that won’t happen until the Sun’s future white dwarf is cold and dead.

I just got an email from the History Channel about upcoming episodes. Through most of July, they’ll be focusing on the Solar System in episodes on the Moon (tonight), the Earth (July 10), Mercury and Venus (July 17) and Saturn (July 24). With the end of July, they’ll temporarily leave the solar system and the Milky Way to look at galaxies (July 31), before returning to look at the death of a star (August 7), and the outer planets (August 14), and finally the random dangerous non-solar system places (August 21). The last two episodes will search for ETs (August 28) and will explore beyond the Big Bang (September 4). For those of you trying to figure out why “The Universe” is fixated with the Universe, consider my three thoughts again.

*Astronomy Cast did a short experiment in producing vodcasts that had slide shows of images accompanying the audio. This trial was ended for two reasons: 1) the technology just didn’t seem to be ready – too many of our listeners mp3 players couldn’t also handle m4a files, 2) it took me f-o-r-e-v-e-r to produce each episode and we just don’t have the money to hirer a student to produce video episodes at this time.