Recycling Stardust (and Deep Impact too) 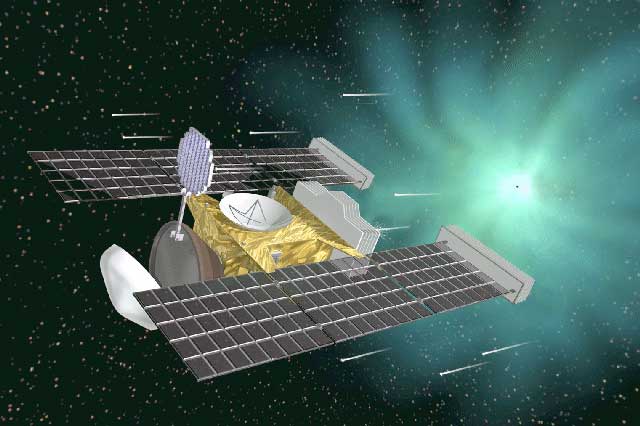 With the big Live Earth concerts planned for around the globe tomorrow, a lot of people are starting to think about recycling. In our quest for a low impact existence, a paperless office within walking distance of home and a diet of local foods seems like a fabulous recipe to reduce our individual carbon foot prints. But how does an organization like NASA, which requires environmentally harmful activities like rocket launches, reduce its atmospheric destruction? By recycling its solar system probes, of course. (image credit: NASA)

On Tuesday NASA announced they will be recycling the probes Deep Impact and Stardust by giving them each a new mission that allows existing hardware to continue to be used to get useful information. According to Alan Stern, associate administrator for NASA’s Science Mission Directorate, “These mission extensions are as exciting as it gets. They will allow us to revisit a comet for the first time, add another to the list of comets explored and make a search for small planets around stars with known large planets. And by using existing spacecraft in flight, we can accomplish all of this for only about 15 percent of the cost of starting a new mission from scratch.”

For Deep Impact, the new plan involves both using its excellent imaging capabilities to observe transits of exoplanets around distant stars and redirecting the space craft to Comet Boethin for a December 2008. This mission will allow Deep Impact to fill the exploration gap left when the CONTOUR mission failed. What many people don’t realize is people’s jobs (and sometimes degrees!) are directly tied to the success and failure of these missions. When these satellites fail, years of planning can instantly become wasted effort and funding can get pulled, putting people in the unemployment line. By redirecting Deep Impact to this comet that had been a possible target for CONTOUR, some of the planning can get reused, and money should become re-available for research.

The second recycled probe, Stardust, is going to go back to Deep Impact’s old friend Comet Temple I. On the 4th of July, 2005 Deep Impact dropped an impactor in front of the comet, and then orbited away to take some good images. With Stardust’s revisitation of Temple I, scientists will for the first time have images of a comet before and after it passes near the Sun.

In the press release, NASA makes a big deal about these new missions only costing about 15% of what it would have cost to start new missions with new spacecraft. While I am all for mission extensions, spacecraft reuse, and otherwise finding every possible way to stretch the NASA dollar, I only hope this doesn’t become an excuse not to fund anything new. A dollar saved is not a dollar earned. It’s just a dollar doing nothing. NASA needs to be able to introduce new technologies and let new generations of researchers have their day in space (or more reasonably, have their space crafts’ day in space). Investing in satellites is really a way on investing in dreams.

Interesting closing note: NASA also announced they are buying a new toilet for the ISS. The new toilet costs $19 million. This is more than the cost of the 9.2-m Hobby-Eberly telescope in Texas (cost $13.4 million + unlisted over runs). Can the toilet do science? Here’s a crazy idea – let’s do a national college contest to design space toilets. I’m betting some MIT, Carngie Mellon, or U-[insert state] students could find a great, cheaper way to flush. This seems far healthier than challenging them to design the better way to wage urban warfare.