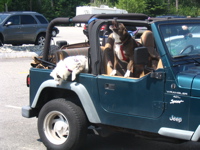 I have a 1997 Jeep Wrangler. It is a good car that rarely gets driven because it guzzles gas. Sometimes though, when the weather is clear and I have no care for the status of my hair, my Jeep and I hit the road at high speeds. He (my jeep is a male named Sebastian) was my first major car purchase, and was my companion going to horse shows, to dog parks, on observing runs, on 4 different cross country moves, and through a lot of thick and thin.

Yesterday my jeep’s check engine light came on, and as it humped and bucked its way done the road, hesitating and then, um, not, I knew my jeeps time had come – it needed a its first major repair.

Today I took my jeep to the shop where it now awaits diagnosis.

I love my jeep, but I recognize it is reaching the point where I probably shouldn’t go on couple hundred mile road trips unless I’m prepared to get towed at some point. I recognize one day my clutch will go, and where ever I am, I will stay.

But, in general I’m mostly safe (it is a jeep – completely safe isn’t an option). And I’m willing to make repairs as needed because my jeep is right now the only thing I have to carry large objects (like plants and telescopes). I need it. I put up with the dangers and setbacks so I can get things done.

The United States as a space shuttle set. The youngest, Endeavour, is 5 years older than my Jeep and has a whole lot more miles under its belt. When it rides its external tank into space it is essentially a car being towed by the gravel truck. It can hope not to get hit, but, well, gravel and foam both like to dent vehicles. These spacecraft are old, they have issues, and sometimes they are going to need major repairs. But they are what we have, and they are mostly safe (they are after all space craft – they can’t be completely safe). The astronauts know, one of these days they might take it to orbit and need to find a different way to come back down. That’s what it means to have an old vehicle.

I drive an old car by choice.

If you were driving the space shuttle, what type of a choice would you want to see made?