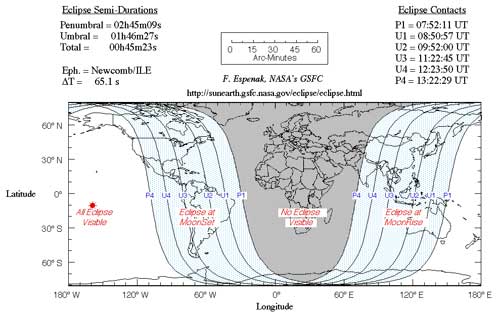 Every 6 months-ish there is a lunar eclipse visible somewhere on the planet Earth. While newspapers like to call these things rare, they just aren’t. What is rare is a nicely timed for prime time lunar eclipse.

For those of you who aren’t quite sure what causes a lunar eclipse, let me step back a second (everyone else, skip this paragraph). Every 29.53 days the Moon completes one orbit around the Earth relative to the Sun. Kevin Lee has created a neat applet of the moon’s orbit if you want to see things in action. The gist of it is simple. If the moon is between us and the Sun, we can’t see any of the part of the Moon that is being illuminated, so we have a new moon. In order for us to see a full Moon, we need to get out in front of the Moon (between and the Sun), and keep our own shadow out of the way in the process. The tilt of the moon’s orbit generally does this for us. As the moon goes around the Earth its orbit carries it North and South of the ecliptic – the line the Sun follows in the sky. The tilt of the moon’s orbit, like the tilt of the Earth, maintains a fairly constant orientation relative to the stars, which means the high end of the orbit only points toward the Sun once a year, and the low end of the orbit only points toward the Sun once a year. There are two mid-points, where the orbit crosses the Sun’s path, and these each also get their shot at pointing toward the Sun. When the moon is new and this intersection of orbit and Sun’s path on the sky occurs, we get a partial or full solar eclipse, and when the Moon is full, we get a lunar eclipse. (I tried really hard to find a copy-right free image to explain this and failed. If enough people ask for a graphic, I’ll create one). Anyway, we are about to have one of these twice a year alignments where the Earth gets directly between the moon and the Sun.

This Tuesday night (for my time zone – check here for more general times a lunar eclipse will begin at about 2:30 am and continue on into the dawn. This is not a user friendly time for me and my 9am meetings. It is admittedly even worth for those on the East Coast, and not at all visible for Europe.

However, if you are in South East Australia, New Zealand, or Indonesia, this is totally the total lunar eclipse for you. It will start just after Sunset and continue through the early evening. It will be high in the sky for those just north of the equator. This is a nice temperate time of year, and you really can’t ask for better.

Those of us on the other side of the world are just going to have to pout this one out.