I’ve decided Mars is the taunting red planet. She hangs up there, red and provocative, reveling here poles and captivating us with her canyons. She plays a careful game of peek-a-boo with her here-today, gone-tomorrow sand storms. She spikes our curiosity with gullies that seem to have been made with water, and black streaks that could be made by water. With scientific whispers, she hits at the possible of present day liquid water and maybe even present day life.

And then she takes it all away. 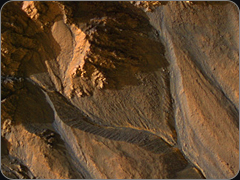 A trio of new articles in the journal Science indicate Mars may be just another dry, lave covered world. (see HiRISE for information) In the first article, they take a new look at the gullies formed inside craters. Some of these gullies have appeared in recent years and it had been hoped that perhaps they had formed when underground water emerged for some unknown reason. New studies, however, indicate that these gullies may just be dirt tumbling down steep crater walls. The HiRISE team’s analysis notes there are light colored sediment deposits up hill from the gullies, and it would make perfect sense that some of the hill just broke away and tumbled down making a dirt dug gully. Dirt 1, Water 0. 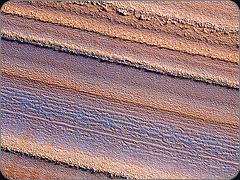 (Their second story is emotionally neutral. They focus on the Martian North Pole, and in a study of 30-cm resolution images they found that their are signs of ice motion (called mass wasting), flow, and debris piling up. All these processes are things we see on Earth, and it is neat to see them on Mars as well.) 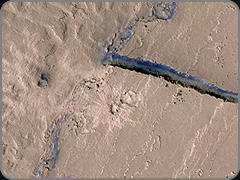 The third HiRISE paper brings us more sad news. Athabasca Valles had previously been believed to be the site of vast outflows of water, and had what many had believed were shore lines. Now, looking at these geological features in higher resolution, it looks like this area is just another lava flow. At some point in Mars past, some Martian Mt St Helens let loose and carved out part of the planet, leaving behind a beautiful sheen of lava and deceiving geology. No water. Just rock. (Lava 1, Water still 0)

And then she throws us a bone. 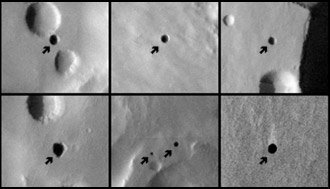 In yet a forth study, this time using Mars Odyssey, a series of caves were located in the side of the volcano Arsia Mons. The way these caves were found was really neat. During the day they appear as slightly cool spots on the surface, and at night they appear as slightly warm spots in thermal maps of the planet. Just like caves and Earth-berm houses here on Earth, the cave walls act like insulation a help maintain the temperature inside the caves at a fairly constant level. The scientists point at that these caves, in addition to providing thermal protection also provide a certain amount of radiation protection. If life could exist anywhere on the surface of Mars, those caves represent both a good place for us to put life (like astronauts) and look for life (like not-much-oxygen needing bacteria). There (of course) is a cavaet: The caves are at a high altitude and even by Martian standards the atmosphere is thin. (image credit: NASA/JPL-Caltech/ASU/USGS)

Oh fickle Mars, how you toy with our hopes. You offer us the promise of water and life everywhere, but no where. When will you reveal your secrets? Do we really need to explore your every beautiful crevice crater with our robotic fingers and we look to tickle out a bit of truth?

One day we will send astronauts to you, and they will force you to reveal your secrets.