Sputnik in the Corn

I now have a bathtub. Yesterday, my husband and I drove 230 miles across Missouri and 230 miles back in the name of saving gobber money in shipping on an acyclic claw-foot tub to replace the one that got removed in the process of trying to save my bathroom from its state of singeing. Along the way I saw many sites, including Sputnik in the corn. 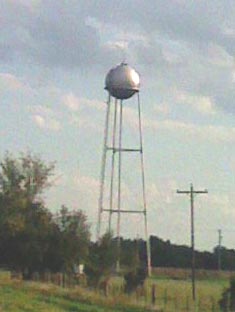 Okay, so that really bad image (from my iPhone) doesn’t really do it justice. At the top of this water tower is a lightening rod, and I swear it looked just like a weird corn-field characticture of Sputnik rising above the stalks. It was just too funny not to share.

This mutant water tower wasn’t the only silly sight of the day. We also found some place I hope took very large liberties with their name. In the “Warrenton Outlet Center” there is a place that is called “X-Ray Tanning.”

If some crazy entrepreneur actually tried to tan people with X-Rays, I’m fairly certain all you’d end up with is people who might be burned and definitely haveÂ¬â€  an increased risk of skin cancer. I’m not sure what is says about scientific literacy that this place hasn’t gone out of business yet. I have come to the conclusion Missouri is a very silly place.

This hypothesis isn’t based just on these two sites, but also on a plethora of cars wearing tails. We saw the first one just outside of St. Louis, and forÂ¬â€  the next hour they increased in number as we approached Columbia. The first one made me point and comment on it’s cuteness. When we reached and area of traffic were 4 in 5 cars wore tails, well… I called someone local and asked if he knew what strange local custom I had encountered. It turns out the the University of Missouri mascot is a tiger and they sell tiger tails for tailgates. And people by them. A lot of people buy them. And they were out in force at 1pm as people headed to Columbia for their 8pm game. I decided that MSU knew nothing about tailgating compared to U-Missouri.

But not all of what we saw as we trekked across this middle state was fun and games. There were a lot of dead down, abandoned farms, and homes that had been boarded up. I’ve read my share of post Armageddon books and been mystified at the idea of gas stations looked up with soda still in the cooler. And then I saw one yesterday, the pumps longÂ¬â€  gone, the shelves collapsing in the glassed in waiting area, and the cooler clearly displaying shelves of soda with labels long out of use.

Even sadder was the abandoned amusement place. There was a ferris wheel in a field, and I giant plastic animal. Around the wound the rails of a kiddie choo-choo train. The fence was there, but the buildings were collapsing in on themselves as the weeds moved inside.Â¬â€  All the buildings at that exit looked abandoned – one was down to just the poles.

People are leaving the farms, and the farm towns are becoming ghost towns.

I’d seen places like this in Texas and New Mexico as I drove to McDonald Observatory or to visit family in Albuquerque. It’s different in the dusty dessert – the buildings just sit with broken glass for decades. In the wetness of the prairie,Â¬â€  nothing is permanent and the moves in to take back what people stupidly put in its way.

On the radio I here about the collapse of the economy, but as an academic it hasn’t really touched me yet. The war in Iraq is more real to me – I have friends fighting and my students come back far to old forÂ¬â€  their years. The economy has always been bad, but I didn’t know what that meant until I saw the abandoned play land in the prairie.