Megan Gray of the University of Nottingham (UK) is blowing away my mind with an elegant and articulate press conference on the link between galaxies and their environment. She is using beautiful analogies and I just want to say that if you want a speaker on galaxy evolution and youâ€šÃ„Ã´re in England (or have a good travel budget), get her. It helps that there are amazing pictures punctuating her lilting scientific story. 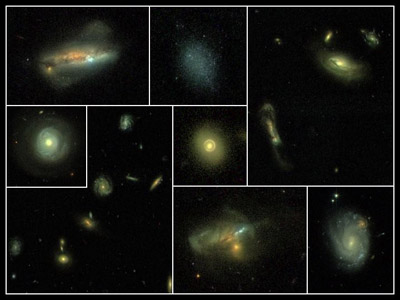 Okay, hereâ€šÃ„Ã´s the science. By looking at a section of the sky in the optical, x-ray, ultraviolet, and infrared colors of light, they were able to peer through gas and dust and explore the apparent shapes of galaxies. The thing is, how things appear and how they are actually shaped arenâ€šÃ„Ã´t always the same thing â€šÃ„Ã¬ gravitational lensing can cause galaxies to appear deformed. My measuring these deformities, we can measure (and they did measure) the distribution of dark matter. When galaxies are in rich environments â€šÃ„Ã¬ where they constantly interact with visible and invisible matter â€šÃ„Ã¬ it effects how the galaxies evolve.

Interactions initially trigger star formation while simultaneously stripping gas and dust out of the interacting systems. This leads to almost all the gas and dust in a system either forming stars or getting removed. After that initial burst of star formation ends, the galaxy if left to die. With the gas effectively removed or used up, it has nothing left to form stars. The majority of the star formation takes place in the suburbs of galaxy clusters, where individual galaxies most often undergo prolonged interactions. (In the center, things are moving fast and donâ€šÃ„Ã´t interact as long. On the outskirts interactions are rare.) These interacting star forming galaxies are often deformed, bright, and beautiful in their death throes.

This work actually relates to some of the research Iâ€šÃ„Ã´m doing with a student, which Iâ€šÃ„Ã´ll write about later.