With a lever, I move the Earth

“Give me a lever long enough, a fulcrum strong enough and I’ll move the world” –Archimedes

This is actually a really good question, and was way harder to work through than I had originally anticipated and requires a number of assumptions along the way.

The only problem is, I don’t know how long either the long end or the short end of the lever is. That’s two unknowns and 1 equation. I’m going to make the assumption that if the end of the lever is just touching the Earth and is tangential to the surface, the closest the pivot could be is the visible horizon (about 5km from the surface).

WOW! (Note: I’m assuming I’m pushing perpendicular and the other planet’s pull is pulling the planet perpendicular to the lever, and that I’m moving the Earth over such a small angle that I can ignore any change in angle of the force).

I’d known it was going to be a big number, but…

Now, part of the problem is, I have to over come not only the inertia of the Earth, but also the force that other planet is exerting on it. What if we remove that other pulling planet?

Now, I have to admit, that when I first thought about this several days ago, I figured I’d also real fast calculate this new number – the force needed to move the Earth assuming the universe consisted of nothing but me and the Earth, and a lever of negligible (but amazingly strong!) mass. I’ll stick the lever and the fulcrum in the same place. The only problem is, I don’t know either the force on the Earth from the fulcrum (I can make it anything!), or the length of the lever (again – two unknowns).

Well, I’m going to use basic rollar coaster 101 to solve this. Let’s speed things up, and assume that in my magical imaginary universe I have a space craft that will move my feet such that I keep up with the moving lever and always exert my 450 lbs of force on the lever (this is like pulling someone on rollar skates with your hands while youÂ¬â€  (don’t ever do this!) sit in the back of a pickup. You have to exert a certain force to pull them, but you don’t have to run or exert force to accelerate yourself. In my crazy imaginary universe, I’m going to say that as I slowly accelerate the Earth from rest and get it into motion, my acceleration can’t exceed 9gs (9 times the pull of gravity on Earth). At more than 9gs, people tend to pass out. This specific acceleration comes from my circular motion. 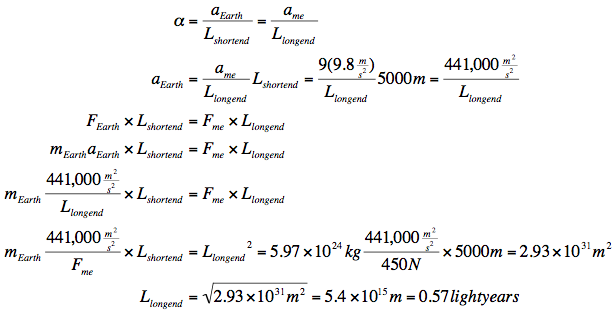 Which is a whole lot more reasonable, but still very silly.

Now here is where I ask you to be skeptical. Check my math. Look for bad assumptions. Look for things I missed. It’s late on a Sunday night and I’m doing math while watching Ghostbusters on Spike, which is showing a hilarious commercial with lizards doing the dance from Thriller (and some chick who really wasn’t necessary).Â¬â€  I know myself well enough to know I likely enough I made a mistake. So – find it if it’s there 🙂

My students are so glad I’m not teaching a high lever class this semester (I’m teaching science foundations for education majors). In a class that covered gravity and circular motion, this would so totally be on the final…