Heathrow 5, Munich, and a Dragon

I’m not quite sure how I’m still moving, but I am.

Friday, a little after noon Central time (GMT-6) I gathered my belongings and rushed for a plane. From St Louis to Chicago, with a run from Terminal H to K, I raced to catch a flight to London. Finally settling into my seat (39J) I settled in to fly roughly a quarter of the way around the globe.

Airplanes are one of those random places where I get to learn just how poor education is in America. As we sat waiting to take off, the women in 40J loudly complained into her cell phone, “I don’t understand why we have to fly all across Canada and then down over England. Why can’t we just Fricken Fly straight to F***ing London.” She, like the rest of us, was looking at the map that showed the projected flight of the airplane, a geodesic that stretched up and over the North Atlantic. This projection of a three dimensional world onto a two dimensional map made it appear that we were taking a silly route – but… Um, no. We were taking the shortest. This women, like so many, just didn’t understand great circles. She went on to whine loudly, “And this screen can’t be right. It says London is 5 hours ahead of us in time. They’ve got to be a lot more then that.” Um, no. The planet only has 24 hours to stretch out around the globe, and in the grand scheme of the planet Earth, London just isn’t that far around the globe.

For many hours, I sat and dozed and read The Sparrow. The flight was turbulent and my own stupid failure to drink enough gave me a dehydration migraine as land and landing approached. (Never give yourself only 45-minutes in Chicago to transfer). The plane dove through the clouds in a breath-taking dawn, and I found myself over the Thames and over a country I’ve never before visited.

Sadly, for today, I’d only see the airport. My American Airlines flight and I landed at Heathrow Terminal 3. Heathrow Terminal 3 is a waste land where one can not buy a beverage, and where passengers are herded like lab mice through an Echer inspired maze. Over, across, down one escalator, around and up another – we trudged like weary rodents hoping the cheese they smell is actually real. My connection from Heathrow to Munich was on a flight co-listed between American and British Air, and I was loaded onto a bus a transported around and around to Terminal 5 – the Mythic New Terminal. With a careful security check, I was finally in a vast plaza of shopping insanity. All I wanted was hot tea. I eventually found it beyond the Sony Displays, beyond the designer handbag displays, and beyond the Virgin Galactic display. I have to admit to always being baffled by the airport cum shopping mall scenario – who wants to make their carry-ons weigh more? Do people actually buy designer suits and stuff them into their roller bags? I guess so – I’m just not one of those people. I’m a “Please, hot tea, please please please” kind of girl. Between my flights I managed to get a small pot of tea, a BLT (that had horseradish instead of mayo – eww eww eww), and then a to-go cup of more tea.

And then, I was on a plane again, this time headed to Germany. Sadly, my luggage was not. Heathrow’s Terminal 5 is brand new – only a couple weeks old, and its luggage system doesn’t work at all. Roughly half the people on our flight (even after a 1 hour luggage triggered gate delay) didn’t have their luggage when we reached Munich. Customs consisted of declaring I didn’t have my luggage.

Arriving a train and an underground journey later at my hotel, I had a sad moment of lack of toiletries. I checked email. I napped. I got online to see if my luggage had been found. I became more sad because it hadn’t. I brushed my hair, dusted myself off, and caught an underground to Marienplatz where I ended up going to the same store I might have gone to back home – good old affordable H&M.

I just want to say, Marienplatz is stunning. On one side of the plaza is your standard commercial buildings, with McDonald’s at street level and Colors of Benetton and furniture stores stacked above. That one side of the plaza could have been anywhere – Boston, San Fran – Every major city has that layered mall somewhere. But the other side. It took my breath away. There are no words for what I felt as I looked at this beautiful but ruined building. All I can do is give you a picture. 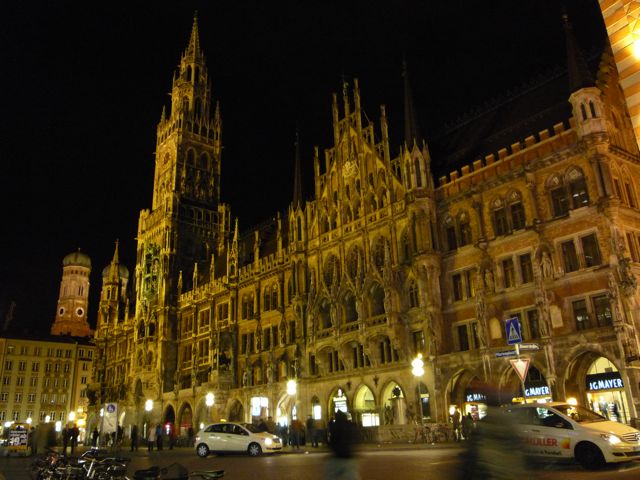 My evening was spent visiting with a long time Internet friend – one of those random friendly people I’ve talked to over email and IM over the years. Pictures will be up tomorrow 🙂

And if any of you in England would like to meet me too, I’ll be at the Castle on Castle Hill (warning – there are two Castle pubs in Cambridge) on Friday night from 1800 to at least 1945 (if many people come, I’ll stay longer). If you think you’ll come, please let me know.

More tomorrow. I’ll be meeting friends in front of this Dragon. 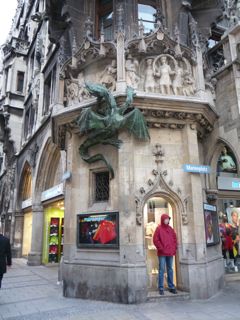