A Sunny Morning in Oxford

I awoke to the following this morning. 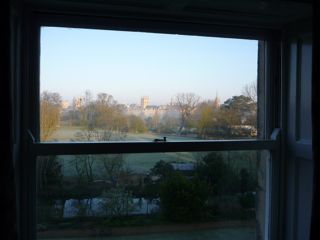 I now understand why every faculty member Iâ€šÃ„Ã´ve ever had who went to Oxford complains about the ugliness of their current university (any one of many). Really, can anything in the states compete?

They also have quite civilized dorms, with a proper tea set laid out with biscuits.
And strange objects are also left on lamp posts. Walking to the building Chris works in he spotted on a lamp post an envelope labeled “Take Me” so he took it. Inside was a CD or DVD labeled “Take Me / Watch Me.” We want to find a computer no body likes to watch it, but thus far said hated computer has yet to be found. 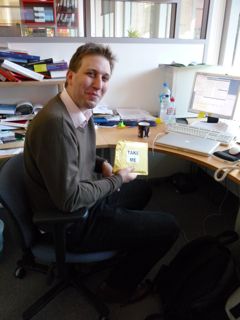 At 2pm Iâ€šÃ„Ã´ll be giving a talk on the IYA New Media programs. This morning I attended a coffee talk on the NAM meeting (see Chrisâ€šÃ„Ã´s blog), and realized how much I miss being in an astronomy department. There was a table of postdocs and I think 1 faculty member (maybe 2). They went round the table reviewing what theyâ€šÃ„Ã´d seen at the meeting, discussing consequences, and tests, and raising background questions. It was one of those moments that reminds you science is dialogue and we learn socially.

I donâ€šÃ„Ã´t have Internet in my dorm room, but tonight or later this afternoon Iâ€šÃ„Ã´ll sit down and share with you all that I am socially learning, and hopefully some audio as well.