My second morning in Oxford can perhaps best be described as a series of directions: around the circle, through the campus, over the hill, past the castle, down the hill, dash at the bridge. Iâ€šÃ„Ã´m currently sitting with my computer on a train on my way out to the Rutherford-Appleton Station where Iâ€šÃ„Ã´ll be talking with Chris Davis about STEREO and other missions. Getting to the train was one of those experiences that led me to believe there is a certain calculus of foot directions that needs to be applied when getting walk times from people taller than I am.

Twice now on this trip Iâ€šÃ„Ã´ve received directions that included the friendly phrase: â€šÃ„ÃºIt is a 15-minute walkâ€šÃ„Ã¹ Both these declarations were utterly false for my leg length. While Iâ€šÃ„Ã´m not particularly short, Iâ€šÃ„Ã´m not as tall as either of the men who gave me directions, and the degree of â€šÃ„ÃºThat was more then 15 minutesâ€šÃ„Ã¹ seemed to scale roughly with their respective heights. No big deal â€šÃ„Ã¬ I didnâ€šÃ„Ã´t miss my train or my supper (the two places I headed in these two different cases). Still, I wonder where the research on the rate at which commuters walk as a function of height is recorded (there is a particular stride common to commuters that might serve as a fair starting point). As I said, no real complaints. No harm was done. Iâ€šÃ„Ã´m just amused and have this terrible desire to ask walking directions from someone shorter then me, so I can see what happens.

The train is just pulling into my station. â€šÃ„Â¶ More to come.

I feel like 2 days has past since I last wrote about my travels, but it has been only 14ish hours (sleep is for when you die.) I had a fabulous day and have some amazing audio to edit on the flight home if I can find an airplane power adapter. My morning at Rutherford Appleton Station gave me a chance to meet satellite instruments, meet satellite operators, and learn about the Sun, and quite randomly how things are imaged with neutrons. Iâ€šÃ„Ã´ll write about this in detail when the audio goes up.

I did have one somewhat embarrassing moment of architectural confusion. When you look at the picture below, what do you see

I for one, had an “Oh My God, they must have three reactors over there! – That’s a nuclear Power Plant!” reaction. I spoke at length with my taxi cab driver about how something like “that” would never get approved in the U.S., and I had never seen something that big and was amazed. Never once did I use the word Nuclear, however. He took it all in stride – It provides all the power for the county Oxford is in, he said, so no one minds too much (That’s it?? I thought. It doesn’t power the whole Southern England?). No big deal, he applied. I was just in awe. Driving back from the research station to the train station with Chris Davis, I brought it up as well, asking about safety concerns. No one was concerned, Chris said, it was just a bit annoying to sometimes get caught in the mist from the cooling towers and find yourself in a cold wet micro-environment. I mentioned the weird alarm drills and stuff we’d had when I visited a friend’s house near Fermi Nuclear Power Plant, and pressed on the safety issues (really – I’m pro nuclear power, I just live in a bit of fear of Homer Simpson). No – not really he said. I couldn’t imagine a facility that big that had never had anything go wrong, so I brought up when a flywheel (I think it was a flywheel at least) broke at Fermi and they almost didn’t get the rods out fast enough to not damage the facility. He responded, “We don’t have things that bad with the oil.” The Oil? That’s a gas burning power plant? For about 20 plus total minutes I’d had two separate conversations with two separate people that in my mind were entirely about nuclear power plants, and, well, I was the only one who knew that’s what I was talking about. I need to be better about banning pronouns from my life

After several hours at Rutherford Appleton Station, I met Chris Lintott at the train station and we road into London. Chris did his graduate work in London and he gave me the chance to see a high-lights reel of the city on foot. From the train, after a brief break, we headed off for the Tube (I love that they, like the Boston Metro, use a T as their station marker) and popped back out of the ground in Greenwich.

Rather than telling you about it, let me just give you some pictures and tell you that you are looking at a Greenwich University. 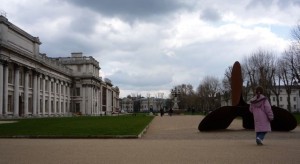 And here is a cool building at Greenwich Observatory as well as the meridian line (interestingly, I live on the 90th meridian where I am at SIUE. 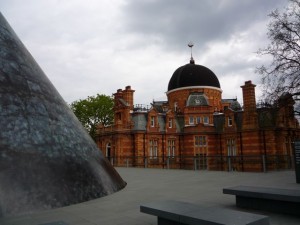 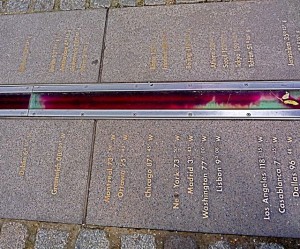 From Greenwich, we took a boat ride of the Thames River, going past the Tower of London, the Tower Bridge, the London Bridge, the Millennium Bridge that had resonance issues and finally got back on land at Westminster and walked from there past #10 Downing street , Scottland Yard, random pretty buildings and landed at the British Museum. We walked the Museum, and below is the most heartbreaking piece of statue I think I have ever seen (background, I used to own horses). Have you ever heard a horse scream? I hear this horse, the horse that drew the sun across the sky, scream as he is consumed by the night. 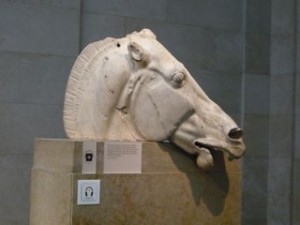 After some additional touring through the museum, past all manner of beauty and culture and death and celebration of life, we went for food.

In my adventures I have spent a lot of time talking to folks (generally named Chris). Conversations have wandered across all topics of life and culture in the United States and here in the UK. This has been a truly eye opening experience for me, and I have learned a lot about how the US is perceived abroad.

The US is a vast expanse of different cultures, geographies, and lifestyles. Texas is bigger than France, and New England + New York is a good match to the actual island of England in size and population. The majority of the television we export tells the story of people on the coasts, from CSI Miami, to Friends, to the OC. We are portrayed as a wealthy nation (and in general we are), an educated nation (and in general we are), and a mostly safe kind of place (and maybe in general we are). What is forgotten are the tidal islands of Carolina, where shoes can’t always be afforded. What is forgotten are the mountains of Arkansas, where running water sometimes doesn’t exist outside of the kitchen. What are unknown are the New Mexico, Colorado, Dakota, and other Native American Reservations were power doesn’t go to every house and clean water is sometimes hard to find. What is unknown are the crime rates, the mugging rates, the sexual assault rates. I have gotten a slightly appalled look more then once when I’ve asked if it was safe to walk around this or that place after dark (not something my friends or professors would have let me do at Michigan State). I have gotten a series of blinks when I have brought up my concerns about how deep into the population IYA will reach with so many people not online – not everyone has internet, and not everyone has computer skills or access. My students, some of them, would hand in term papers hand written if they could – the trip to campus required to use campus computers is a hardship for some. I’m kind of proud that the US projects a fairly positive image, but at the same time . . . It breaks my heart to have to say – no, no that’s not the way it is. My nation has pockets of poverty. It has pockets of terrible violence. There are campus emails reminding women never to walk alone at night, and the dancers are given passes for close-in faculty parking spaces so they can just make a made after dark dash to their vehicles if they have to. This is the safest campus I’ve ever worked on, and yet … I wish the foreign visions of the US were true ones. It is eye opening, and it is saddening. Perhaps someday their vision will be reality. Hopefully none of them will make the wrong walk on the wrong night in the wrong city and see the things I have seen before this vision is realized.

Now in Cambridge, I find myself some place that looks so much like “Textbook Medieval” that it looks like some areas of Disney Land. I haven’t gotten to see much of the city during the day, but I hope to explore at lunch. This morning’s part of the conference has been a tutorial on star formation and a travelogue of Arne Henden’s (Director of AAVSO) journey of astronomy through Australia, New Zealand and Tazmania. This afternoon will be more science, and I’ll be here reporting it to you. 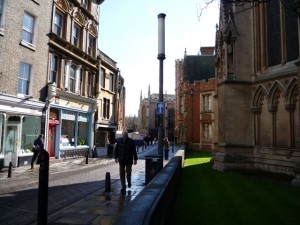