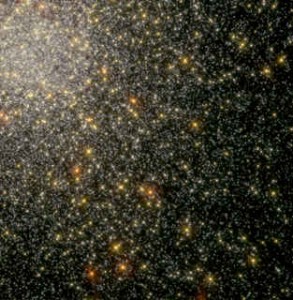 As an undergrad and even for most of my graduate school years, astronomy had this problem: Globular Clusters seemed to be older than the universe. We all knew this was a matter of someone calculating something wrong, but no one knew what. Cosmologists, looking at the still being explored expansion of the universe, kept getting an age of 12-13 billion years for the universe. Stellar evolution experts thought the globular clusters might be as old as 15 billion years. Thus… well… there were issues. In the intervening years we’ve realized that both the stars are younger (9-13 billion years old), and the universe is older (13.7 billion years old). (image credit: NASA /Ron Gilliland, Space Telescope Science Institute)

But this is just the physical age of the globular clusters. It tells you nothing about what stage in their lives these majestic objects are in. For instance – A Hamster that is 2 years old is very senior, while a Galapagos tortoise at 100 years old is only just middle aged. The physical age can only have meaning once we understand the lifespan of a system, whether it be biological or cosmological. While globular clusters are physically one of the oldest structures in the galaxy, they have many stages in their dynamic evolution. Initially, they form out of a single large cloud of material. The stars then collapse together until the interactions of binary stars in the center stop the collapse for a dynamical period of time while they dance their death dance. Then the binary star interactions lead to some stars getting flung out while others collapse in while the binaries rip apart.

The key to identifying the dynamical age of a globular cluster is the binary stars (nomenclature: we call collapsing globs adolescent, those with binaries in their core middle-aged, and those in final collapse elderly). In middle-aged clusters, the cores of globular clusters are rich with X-ray binaries. New observations taken with the Chandra Observatory by John Fregeau of Northwestern University and collaborators find that several clusters are rich in these X-Ray binaries, and others haven’t quite reached this high-energy evolutionary stage. This suggests that while globular clusters are the oldest structures we know of, they are still young at their core.

One of the most fascinating parts of this for me is the dynamics. In general, space is empty. Stars don’t collide and giant stars don’t generally grab a binary companion part way through their life. Globular clusters, however, are so dense at their core that they can be seen in simulations to dynamically beat like a heart as stars first gravitationally pull one another into tight fast orbits, and then in three body interactions end up flinging the spare partner out to the hinterlands of these beautiful systems. When I first started graduate school, I knew Victor Szebehely (his daughter and I were close friends). He wrote the definitive book on how to solve the restricted three body problem, and he’d figured out how three body interactions could fling one of the members rather violently out of the three-star family. He’d explain this using salt and pepper shakers and a glass of water as needed. I have this mental image of the core of a globular being simulated by armies of salt & pepper shakers orbiting with water glasses until one of the three gets flung away.

And now I know, all the really cool flinging has yet to start. Some day in the future, Victor’s three-body realizations will be worked out in stellar dances as the ancient globular clusters pass from puberty to middle-age sometime around when the Earth dies.

It’s all a matter of scale.