Detritus of a Geeky Childhood 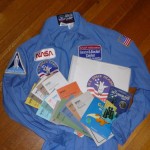 When my husband and I moved to Illinois we packed all our belonging in two PODS with some (but not much) room to spare. When my parent’s sold their house 3 months later, they shipped me my childhood in a PODS-sized space inside a classic moving truck. It took two months for my husband and I to unpack our belongings. It has taken me the past 18 months to sort thru my childhood’s 60 plus boxes of treasure and trash (and teeth. Bleh. Parents, do not keep your child’s baby teeth. Ewww. Yuck. Do not keep!) As of today’s final Goodwill run, I think I can say I have beaten the carnage down to 4 boxes of papers that I just don’t know what to do with. My God, I was a nerd.

This long process has been a learning one. My parents never threw out anything (although they did keep for themselves my extensive sci fi and literature collection). In the piles I found my earliest report cards and standardized tests, the stuffed seal I took with me to the hospital when I got ear plugs when I was 5, a certificate stating that I had attended a NASA planet art thing to celebrate Voyager II reaching Saturn when I in first grade, and a very trashed Space Shuttle model. While I know I have always been interested in space, it was not until I went through these boxes that I realized how deeply astronomy and aerospace had infected my young psyche.

Let me be clear here. I knew I was a young geek. Heck, at one fetal period I was probably a proto-geek. I don’t have any memories from before I loved astronomy. Finding tangible evidence of my earliest geekiness was in no way a surprise. It was the level of the geekiness that was unexpected.

Each year could be ticked away by the sci fi and space science that came out. Battlestar Galactica morphed into Buck Rodgers, which turned into Star Trek NG. (Did you know Wil Weaton, who was a bigger Sci Fi Geek then I was, once was in those silly teen girl magazines?) I had the coloring books, the collector cards, and a small number of figures to prove I even played as a geek. In the land of astronomy, Voyager melted away to make room for the Space Shuttle, dark matter was discovered and gamma ray bursts began to go boom in popular books I found in boxes. Model Rockets filled drawers, and airplane posters were interleaved with Return of the Jedi posters in partially crushed tubs. Aged National Geographics showed our discoveries, Space Camp paraphernalia was my hidden high school (intellectual) pleasure, and even my school papers discussed alien flights of fantasy as my English papers were turned into acts of scientific exploration.

That’s the other thing that was shocking. Along with astronomy, I also don’t have any pre-“writer” memories. My entire life I’ve found pleasure in writing, and I’ve been writing misspelled stories (and bad poetry) since I knew how to write. Those 4 boxes I don’t know what to do with contain reams of handwritten and computer printed creative output. Astronomy and writing have always twined together the pieces of my life.

In one box, I found a bundle of NASA pamphlets from 1983. In elementary school we were assigned to write to some place we were interested in someday working at and asking about careers. Some friendly NASA person mailed me 15 fliers on “Careers in Aerospace,” and at the top of the pile, with my name handwritten in cursive, was “Astronomer.” On the inside it says that in 1980 there were only 2000 astronomers employed in the US, about 50 astronomy degree granting colleges, and that if I really want to become an astronomer, I should contact the American Astronomical Society. I wonder how much those numbers have changed (Maybe it’s not too late to contact the AAS and learn more?)Â¬â€  Also in the pile were pamphlets for “Science Writer” and “physicist,” all documenting my future possibilities.

As a college professor, I watch students bounce between majors and possible careers on a regular basis. I’ve heard that more than 50% of college students change their major, often to fields they never knew they were interested in. Looking over my life, I’m shocked our how consistent I’ve been. Yes, I did start college as an International Relations major with a secondary major of astronomy, but that was because I really didn’t think I was smart enough to do astronomy, and figured I’d go into international science policy instead. Really, I trained my entire life to be an astronomer and to be a writer. What my first year in college taught me was to follow my heart instead of my poor teenage self-esteem in selecting my major. Life is filled with twists. My twists just seem to loop a single line labeled “An astronomer who writes.” It’s actually kind of creepy when the evidence fills 60 plus boxes.

But those boxes are gone. The Space Camp uniform I found hangs in a closet with other costumes (wedged between pirate and princess apparel). The books are all going into my office where they’ll wait for some student interested in a project on “What we knew then and now.” The trading cards have gone into boxes, and an old, not crushed, Battlestar Galactica poster waits for a frame so it can hand in the basement work room. My childhood has been put away, recycled, and donated.

As a side effect of this infusion and putting away of belongings, our house now has a “kid’s room,” even though we have no kids. My grandmother’s childhood bedroom set, which later became my childhood bedroom set, came with the boxes and now fills our large guest room. My childhood books sprawl that room’s shelves with figures and random stuffed animals perched in between. I have now had several of my friends ask (in several cases sounding panicked), “You’re not pregnant, are you?!?” No, no I’m not. I just found there are some things I don’t know how to throw out yet – my favorite little kid books; the stuffed animals and china dolls my great grandmother made me; and my collection of Battlestar Galactica and Star Wars trading cards. Now, if (when I get around to having a kid) we end up having a boy, there are still some books that will probably make the trip to Goodwill (Judy Blume is not an author for teen boys). For now though, they sit waiting the outcome of a future chromosomal coin toss.