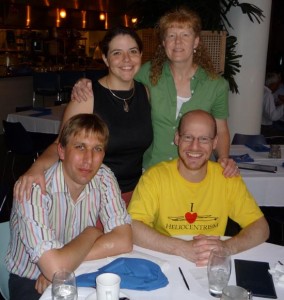 I’d like to start this post by publicly saying I couldn’t be prouder of how well everyone did in the workshops and sessions on new media. From handling random technical messes to giving presentations to remotely, from ad libbing demos to answer questions to just wiring computers and manning cameras – they did it all, they did it well, and I think we took turns making one another laugh as we worked our collective asses off. Here is to (in alphabetical order): Adrienne Gauthier, Chris Lintott, Emily Lakdawalla, Georgia Bracey, Jordan Raddick, Lance Walters, Lars Christensen, Michael Koppelman, Nancy Atkinson, Pedro Russo, Phil Plait, Preston Gibson, Robert Hurt, and Scott Miller. I would also be remiss if I didn’t say that Chris and Scott from the American Astronomical Society IT staff saved our collective behinds over and over with hubs, cables, and internet access in places we thought (wrongly) our cellular cards would work. (Nancy, Phil, Chris and I are in the image by friendly waiter.)

And now onto the summary:

Over the course of the week new media plans fell into roughly two different categories: the way we reported and the way we taught others how to do what we do. If you want to see everything we reported, pop over to Astronomy Cast LIVE and troll through the text, pictures and video. It is a really cool cornucopia of content.

As for what we shared …

Emily Lakdawalla on Images
Sadly, we didn’t record Emily’s UStream, so if you missed it live, you’re just going to have to wait until next time. BUT, if you are interested in learning how to combine images from science missions, here are some links you can use.

For Tutorials (just one on color imaging right now):
http://planetary.org/explore/topics/imaging/

Forum for discussion and interaction with others on amateur imaging:
http://unmannedspaceflight.com

Citizen Science by Jordan Raddick with Chris Lintott
I can do Jordan (and Chris) no justice by trying to summarize him (them), but what I can tell you is Galaxy Zoo II (or 2, I don’t know which they selected) is coming any day now. Everyone get ready to click your way through the universe!

While you wait, here are a couple other Citizen Science online projects you can check out:

In case you hadn’t heard, IYA has a group in Facebook called “I’ll be celebrating the International Year of Astronomy in 2009” GO JOIN IT! We also have a “person.” Can you be her friend?

We also have a “person” on MySpace, and if you tell us where all you hang out online, we’ll embed IYA there too 🙂 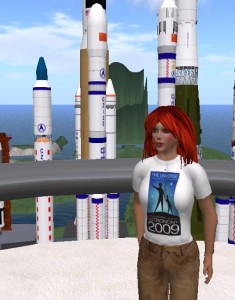 If you meet up with her avatar (or mine) online, she can give you a great notecard of real life science going on in Second Life. I am “Pamela Gondwana” and she is “Ourania Fizgig.” She also made cool IYA T-shirts (I’ve got one! See Picture) that can be copied and shared (which means, catch one of us, and we’ll give you one). If you haven’t been there yet, check out the NOAA Island and the Rocket Park.

These are just some highlights, but they are the highlights that have places for you to go play today. Tomorrow (proverbially), we’ll be bringing you even more as we develop the Portal to the Universe for IYA and new citizen science projects.