Galaxy Evolution and the Language of Violence 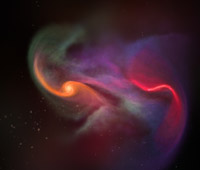 One thing that has always fascinated me is how readily humans (myself certainly included) anthropomorphize everything around us. Even in the precise language of science, the tendency to use emotionally loaded words persists as we discuss the stress or strain on everything from physical structures (calculating the point of failure of building supports), and the failure of ecological niches (determining the tipping point that triggers an estuary to die). The equations we use to describe these failures differ, but the words – the same one we use when a human is breaking – are equally applied. Stressed and strained are not the only emotional states that describe the physical world. In the field of galaxy evolution, the words cannibalism, harassment, shocking, stripping and strangulation are all used on a daily basis. (image credit: NCSA)

The universe is a deadly place. (Don’t believe me? Pre-order Phil’s book!) And apparently, if you’re a galaxy, you simply have to learn how to live with abuse unless you are lucky enough to live in isolation

As we look out across the sky, we find that galaxies like people prefer not to be alone. Studies by determined scientists like Martha Haynes have found that if you look hard enough, their are large galaxies like our own with no nearby large companions, but finding these systems is hard. It is much easier to turn up pairs, groups, and clusters of all sizes and shapes – these communities of galaxies seem to be the more normal social structure for these organisms of stars and gas. But not all family units are healthy ones. In small groups, like the one our Milky Way is located within, it is possible to see active star formation and beautiful spiral structure as far back in time as we are capable of resolving structure. In these small systems, the large galaxies dance lazily, and it may be billions of years before the largest members sweep out their arms to embrace one another in a dance of death. Sadly, that deadly gravitational embrace seems to be the natural way for all galactic relationships to end.

In the largest systems – the Coma and Virgo clusters of space and time – this process is accelerated. There is more mass and thus more gravitational pull, and galaxies whip through space at higher velocities, and due to the increased density – the larger number of galaxies per volume of space – the probability of collisions and gravitational interactions is much higher. This basically means death comes earlier to galaxies that choose to live in cosmic cities.

This death can take many forms, but to understand it, we must first understand how giant galaxies are constructed.

Everything we think we understand about modern galaxy formation* is built on a simply picture: Small systems gravitationally fall together via a process known as Hierarchical Galaxy Formation. As they merge, these small systems build giant spiral galaxies. These large systems will continue to happily consume small systems while calmly producing stars for billions of years at a time. 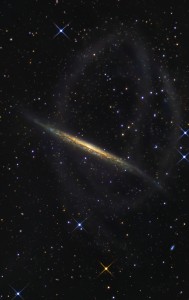 As these giant galaxies live out their cannibalistic, baby-galaxy-eating lives, they leave little evidence of their feeding. Occasionally, there will be a warped disk or a tidal tail (or both), but generally they are good about gravitationally picking up their own messes. As small galaxies fall into larger galaxies, they are tidally disrupted. This means the difference in gravitational pull on one edge of the small galaxy is significantly different than on the other edge, such that the difference in pull generated by some external force (for instance a big galaxy) is greater than the galaxies self-gravity (the force that holds it together). This is the moral equivalent of pulling on the front edge of a cake with enough enough force to pull the cake apart. It is possible to pull on the cake just enough to just move it, but if your pull is greater than the pull of the molecular bonds inside the cake, you will break the bonds and also break the cake.

In the image at left, there is an amazing loop of excess stars surrounding the main (seen edge-on) disk galaxy. This system, called NGC 5907, is an isolated spiral that has recently consumed a smaller galaxy. As the galaxy orbited in and fell apart, it left behind a train of stars, and evidence of its death in the form of a warped disk. The stream of stars is technically referred to as a tidal tail. (image credit:David Martâˆšâ‰ nez-Delgado ( IAC, MPIA), Jorge PeâˆšÂ±arrubia (Univ.Victoria ), R. Jay GaBany (Blackbird Observatory), Ignacio Trujillo ( IAC), Steven R. Majewski (Univ. Virginia), Michael Pohlen (Cardiff)).

In addition to tidal tails, interactions between large spirals and smaller systems can lead to fascinating features, varying from grand design spiral arms (like in M51), to bars (like in NGC 1300), to star bursting rings (like in NGC 4314). These interactions do not destroy the large galaxy’s structure, but rather enhance it by changing the gravitational field.

Changing a spiral into something new requires bigger interaction.

Shaping changing events can come in many forms. Most familiar are the head on collisions of merging galaxies, such as the mice (shown at right. Image credit: NASA, H. Ford (JHU), G. Illingworth (UCSC/LO), M.Clampin (STScI), G. Hartig (STScI), the ACS Science Team, and ESA). These dramatic events initially trigger massive star formation, as pockets of gas and dust are shocked into collapse and driven toward the system centers. What dust isn’t converted into stars in typically jettisoned as beautiful tails and twisted arms. As the galaxies merge into a single object, their spiral structure is destroyed, and a new elliptical shape takes hold. Once the breathtaking burst of star formation is over and the tidal arms are lost, the systems fad away over billions of years into a single dead red elliptical galaxy. This is the eventual fate of the Milky Way and its nearest companion Andromeda.

In large groups, not all interactions are as straight-forward. Often, death comes from a dozen off center blows.

As a spiral galaxy falls into a large cluster of galaxies, it experiences many traumas. It is shocked as it slams into the inter cluster medium. The diffuse gas, which is extremely hot in the cores of clusters, used to be part of the cluster’s member galaxies. Over time, gravitational interactions stripped this material out of its parent systems and left it orphaned in the space between galaxies. Gravitationally trapped, it is heated both through the processes you learn about in high school chemistry (combine enough moles of a gas in a given volume under sufficient pressure, and it heats up. In this case, the pressure comes from gravity compressing the gas), and also from more exotic means, such as radio galaxies blasting the inter cluster medium with high energy jets. The shock of systems colliding also heats the gas. Put together, all these pieces can bring this gas to as much as 100,000,000 degrees Celsius! This angry hot gas is just waiting to do bad things to infalling spiral galaxies. As these spirals fall in, the shock of hitting the gas can trigger star formation, and also disrupt the shape of the galaxy. This is called ram pressure stripping, and it is most destructive in cluster cores. If it blasts too much gas from the infalling galaxy, it can effectively strangle all future star formation, killing off the system.

In addition to being shocked by the inter cluster medium, our in falling spiral may also interact with other galaxies. When galaxies approach each other slowly, such as with the Andromeda and Milky Way, it is possible for them to gravitationally grab onto one another and merge. If instead, two galaxies zip past each other at high velocities, their mutual gravitational attraction will disrupt the systems, but will not cause them to merge. Over time, multiple high speed encounters can transform a spiral galaxy into dwarf elliptical or S0 system. In the most dense clusters, these interactions may occur as frequently as once per billion years. Over just the past 4 billion years, moderate sized galaxy clusters have successfully transformed blue, star bursting spiral galaxies into dead ellipticals via galaxy harassment.

Looking across the universe, we see a pattern where the smallest systems, like the one we live in, have star formation across all epochs, while the richest systems are dead and red no matter how far back we look. It is in the middle-sized systems that we see the universe evolve. This picture is defined by gravity. The large systems formed first, died quickly, and are so dense that infalling galaxies are killed off in as little as 10,000,000 years by ram pressure stripping. What the ram pressure doesn’t kill, galaxy harassment takes care of. In the smaller systems, galaxies move more slowly, generally don’t lose significant amounts of gas, and take their own sweet time getting around to merging. In the middle, something in between occurs, and we are able to see the transformation from clusters having as much as 50 percent blue galaxies, to similar systems only containing a few percent (if that many) blue galaxies over several billion years. Blue means star formation. As the blue galaxies go away, the entire system is said to die.

I have to admit that the beauty of the galaxies, coupled with my own awe at our ability to understand what is going on leaves me wishing we had chosen less violent metaphors to describe our science. Galaxy mergers are one of the most stunning things we can image. While the process does involve the collision of a lot of gas and dust, and it does bring an end to spiral structures, it also causes the birth of something new: an elliptical galaxy. Still, violence is how we are accustomed to emotionally viewing all interactions that involve sudden shape change, or removal of bits. We have been taught, when you see a car fly into another car such that they turn into a single hunk of metal (minus several dozen small bits) you are are seeing something violent, destructive, dangerous, and deadly. When I look at the universe, I see something magnificent, stunning, violent, destructive, dangerous, and deadly. We have no working metaphor of beauty for this type of process. Our language is simply insufficient to capture the glory of the cosmos, so instead, we tell a story of violence. After all, if it bleeds it leads, and the universe is nothing if not deadly.

*Some large galaxies likely formed via a different mechanism in the early universe.

I’m not sure what it says about the personalities of those of us who study galaxy clusters that these are the words we have chosen as a community to use, but I would love to work with a sociologist focused on linguistics to learn more.