Astronomy Education in the Era of Web 2.0 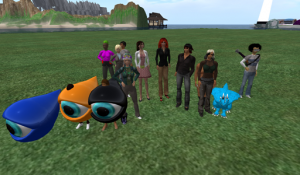 Currently, I’m at SSU learning how teachers teach astronomy and physics concepts related to the types of high energy astrophysics that will be studied in by the recently launch GLAST telescope. I flew out so that I could teach these master teachers about teaching astronomy new media, but I have to admit that I’m picking up a bunch of content I can take back and use next time I teach science foundations for elementary education majors. Looking around the Internet for new resources for my talk, I have to admit that it is getting harder and harder to keep my new media talks into tiny pockets of time. Once upon a time, I’d give a 20-minute presentation on audio-based podcasts. Then in turned into 20 minutes on a pod/vodcasting and 20 on social networking. And then came Twitter. And then came Second Life. And then came Google Earth and Sky. And then came World Wide Telescope. And thenâ€šÃ„Â¶. And then â€šÃ„Â¶.

Today I have two hours to discuss all the ways new media can be a part of education.

Before launching into what all I’m going to discuss, I want to take a moment to say the field of education can suck in a lot of content you’d never think of as education. For instance, listening to the character of “Data” on Star Trek Next Generation blather about Dyson Spheres may teach you something. As someone whose passion is for informal education, I’m very tuned in to the fact that any moment in time that gives you new information you didn’t have before is an educational moment. This means that if you learn physics equations from FoxTrot, I consider the Sunday comics an piece of education materials.

When you expand your definition of “Education” to include public outreach, you are also making moments in time that inspire people to learn into educational moments. This means that if you’re watching the Star Trek and decide you want to look up an article on black holes or to Google if Tachyons are real, then Star Trek was inspiring learning and in that one instance it becomes public outreach.

Now, in general, Star Trek is not constructed purposely as a tool for education and public outreach. It is a money making source of entertainment. But why can’t I turn the Star Trek model on its head and purposely create materials where my goal is to teach and inspire people to go out and want to learn to more, and do it in a way that happens to be entertaining in the same way that Star Trek’s science advisors make sure that it sometimes educational. (Although, my goal would be to always be entertaining, rather than to sometimes randomly be entertaining.)

Okay, lecture over. Stepping of my “Edutainment is ok” soapbox.

In selecting new media to give teachers to stick in the intellectual toolbox, I want to give them new ways that will both help them convey content and that will help them inspire kids to want to go out and seek content on their own.

So, with no further blathering, here are the things I think every educator should know about (which doesn’t mean they should be fluent â€šÃ„Ã¬ but they should know they exist).

Blogs: Get content. Get it now. The best way to find the blogs you like is to follow the Carnival of Space and see who catches your attention and than subscribe to those people using your favorite choice of aggregator (I use Google Reader). Also in the land of blogs is twitter. Phoenix, LRO, and many other science programs have their own feeds that are fun to follow. (And I have one too)

Podcasts / Vodcasts: Didn’t see this one coming, did you? Seriously though, if you have a kid who likes astronomy, the videocast “Ask an Astronomer” is about the cutest thing out there. There is also a huge variety podcasts out there both being created and in the archives. This means you can find a content delivery style that meets the needs of any audience, from the sarcastic to the on-the-level, from the quiet stereotypical planetarium disembodied voice to the video with special FX. Just as you might recommend a book based on the personality of the reader, you can do the same with podcasts and vodcasts (and this is also a free source of content).

Webcomics: From stuff good for kids like the newly EPO’s Chronicles to things strictly for adults like xkcd, webcomics are good way to abuse science to encourage laughter.

Social Networks: Any of you who are in Facebook have probably seen groups that use peer pressure involve people in things that touch on science. I personally belong to “When I was your age, Pluto was a planet.” You also might have become “Friends” with different satellites, joined a group focusing on science like the “Astrobiology Club” or “attended” an event like a solar eclipse or solstice. MySpace has a lot of these same features, but it’s much more frenetic in design.

Social Sharing Networks: The Internet is a big place. A really big place. Don’t know where the coolest new stories might be or even what they might be about? Check out Digg! Now, admittedly, certain websites are unfairly represented. APOD is really cool, but does every image really need to get Dugg more than the typical Orbiting Frog article?

Virtual Skies: While Google Sky makes for a pretty terrible replacement for planetarium software, but it does allow for a new form of exploration that is totally cool in its own right. Within Google Sky images are merged and layered, comments are left, and you the individual and download and travel on tours. The Hubble Site even adds in their podcasts. I have to admit my Mac and I haven’t made it into the World Wide Telescope yet, but the demos I’ve seen are striking and it seems to easily allow multi-wavelength studies to be done. Hopefully, in the coming months we’ll begin to see a gamma-ray skin.

Virtual Worlds: Yes, I know that people with a real life don’t need a Second Life, but as someone who primarily lives a virtual life, I find a lot of value in digital worlds. Within Second Life I can gather and talk with audio to groups of people from around the globe, and sit down and share experiences ranging from public lectures, to streamed video of NASA events, to walk/fly through models of spacecraft, planetary surfaces, and even the solar system. By having “human” avatars embedded in the virtual world it makes the experience easier to get into, and provides an instant set of scale. Check out the SciLands.

I’m sure there is even more out there with new media, but this is where I’m going to stop for today. What’s your favorite new media (and Heaven’s Above and Clear Sky calculator are old media in my book).