My Summer Vacation off the Grid 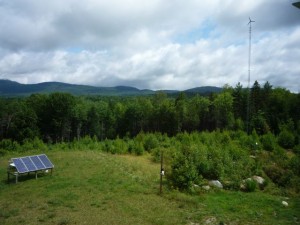 For the past 5 days I’ve been in the middle of New Hampshire staying with some old friends. About 5 years ago they bought a bunch of acres on top of a small mountain in New Hampshire. It was empty land with nothing more than a logging road and a clearing. At the time of the purchase, they were city slickers making a living off the biotech boom in Boston. Desiring to simplify and reduce their impact on the Earth, they built a home for themselves entirely off the grid, grew a garden, and started their own company, Northeast Renewables, LLC (Image: Solar panels and wind turbine. Mt Cardigan is on extreme left of image)

There is a myth in America that off the grid means outside of society. Through mainstream media we’ve been exposed to stories of strange mountain men and members of the Republic of Texas and other rogue groups making their own way off the land via somewhat nefarious means. These law-breaking crazies have brought to us such freaks as the Unabomber and Oklahoma City bombers. The media’s tales tend to make one imagine that living off the grid means shotguns, no TV, no Internet, and maybe even no hot water.

Living off the grid does not require this level of living without modern comforts.

My friends Dan and Elaina have a truly inspirational life. The have built for themselves a home that has all the modern amenities â€šÃ„Ã¬ Satellite TV and Internet, a sauna, a dishwasher, washer and dryer units â€šÃ„Ã¬ without having a significant footprint.When the weather cooperates, they can responsibly use all their modern amenities without needing anything other than propane for the hot water.

The word “responsibly” is the key. They actually put their whole house to sleep at night, shutting off all electricity (they have battery powered alarm clocks). It is really quite shocking how much power is pulled by the standard DVD player while it’s sitting in standby. By turning everything off, they reduce their load of their house’s batteries, and reduce their load on the world in some ways. The only negative is the 12:00 blinking on everything that has a clock. But is that such a terrible thing to face? They are also careful about how they use electricity when their house is awake. I was scolded for leaving my laptop plugged in and running on the counter while my iPhone charged. “Running your laptop is not the responsible way to charge your phone,” I was reminded. And when the battery is charged and the machine is not in use, it should not be plugged in. The same goes for everything that might sit on a charger all day. One particular pager was found to pull 30 Watts fully charged when it sat silent in its base. Unplug; that was my lesson for the weekend.

Living off the grid isn’t entirely about power consumption however. It is also an attitude toward how we eat and live. While we’ve all heard about the concept of a carbon footprint (and I don’t think it’s possible for me to atone for all my sins of flight), carbon isn’t the only issue in environmental abuse. Elaina introduced me to the concept of a chemical footprint. Beyond trying to balance how much carbon we put into the atmosphere through emissions and put into the land through plants and other sequestering methods, we also have to consider the metals and toxins we give and take with the environment.

Our planet has a certain ability to break down toxins into harmless forms and to replenish certain chemicals. While we donâ€šÃ„Ã´t generally think of it, somewhere in the soil oil is starting to be made to someday supply our descendents. Salts are being formed to replace the salt we mine. The Earth continues to work as its own little chemical factory. In considering how we impact the efficiency of this planetary processing plant, the questions to ask are twofold: Does humanity remove stuff from the planet faster than the planet can create it? Do we create toxins faster than the Earth can absorb them? As a species, the answers are hard ones to face. We are using oil faster than the planet is producing it; we will eventually run out (and we’re already running out of the easy to access supply). We are even running out of some forms of fish faster than the oceans are producing new ones! And toxins, well, while bleach readily breaks down in the Sun, the same is not true of pesticides and the drugs we add into the water systems through our sewage. 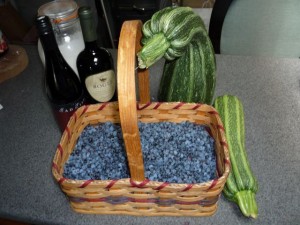 In taking stock of our individual lives, we need to ask if we as individuals are consuming in a way that reduces our chemical footprint and maybe even makes up for the impact of our neighbors. This way of thinking gave me an entirely new perspective on organic eating. I decided long ago that a few more chemicals in my diet aren’t going to affect my health any worse than the chemicals and radiation I encounter working in physics and astronomy facilities. This means that I tend to take the cheap option and just buy the non-organic carrots and apples. What I hadn’t thought about was the environmental impact my cheap food was having on the planet. When I decide I’m not worried about consuming pesticides (given what I inhale passing chemistry labs), I’m also deciding that I’m okay with harming the health of the critters living in the soil of the fields that produce my food, and the workers working in those fields. Organic food isn’t just about my health; it’s about the health of the food chain. (Image: Blue berries we picked and later canned, a Zucchini from the garden, and the wine we drank while canning). 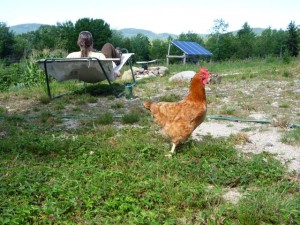 With food prices going up though, taking the organic option at the local grocer isn’t always in my paycheck’s best interest. And here is where my friends’ gardening habits help them out. They have managed to move most of their grocery needs off the grid. And it doesn’t take a lot of acres. For instance, they have chickens. Only one of them is old enough to lay eggs, and they have learned that one chicken lays enough eggs to keep a family of 4 in eggs. Their one egg laying chicken is a family pet, and she was quite happy to follow me around on long walks. By having more than one chicken (and by knowing the local butcher), they can guarantee themselves a steady supply of eggs and an occasional supply of meat (this is what happens to chickens that opt to actually be roosters). They also have both a vegetable garden and an herb garden, both small enough that together they add up to maybe 30 by 30 feet. I know that I could grow everything they are growing in the flowerbeds of our half-acre lot if I wanted too. (Image credit: My husband enjoying the view while the chicken followed me around) 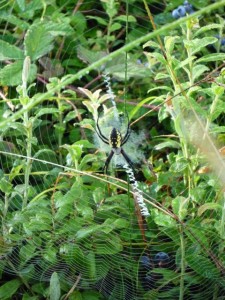 Admittedly, they spend a lot of time gardening. That said, I spend almost no time gardening and I think I can offer hope for the lazy person trying to be kind to the planet. My much smaller garden is generally ignored. It has been weeded once all season, and watered never. While my green beans failed miserably, I suspect my husband and I won’t need to buy herbs, tomatoes, peppers, or any of the things necessary for salad until November (and if I get around to canning, we won’t need to buy salsa or apple sauce all year). I do not have a green thumb. I do not have much/any free time. But I do have a small garden (planted all in one day) that gives me the vegetables I use most when I (or more likely my husband) cook, a few berry vines and grape vines because they are prettier than fences, and an apple tree that came with the house and terrifies me with the number of apples it is planning to produce this year. These plants and their food represent an investment of about $100 and two Saturdays of time, and a savings of gas (no shipping the food to the grocery or bringing it home from the grocery), chemicals (no pesticides or chemical fertilizers), and waste (no packaging). (Image: Garden Spider I saw while picking blue berries for pancakes.)

And one of the side effects of being careful about power and food and waste is that you notice the world around you with a new set of eyes.

The part of this trip that made it a vacation was the part that was spent wondering the woods. They have umpteen wild blue berry, raspberry, and black berry plants covering probably 30% of their property. We hiked, we grazed, we grazed, we hiked. The chicken followed. To quote Elaina, “I don’t think there is a free radical left in my body.” We ate just that many berries (even the wine was from past years berry production).

And, while off the grid, in the middle of the White Mountains, surrounded by berries, chickens, and friends, I still had internet.