Dragon*Con: There and back again 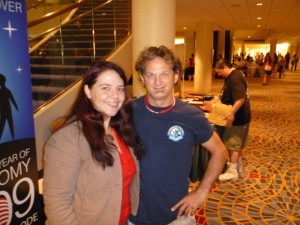 I’m home from Dragon*Con and I feel like I’ve popped out of the Rabbit Hole. The past 4 days were an amazing adventure. On one hand, I was in Atlanta in much the same way that I attend many conferences – I was a scientist with presentations to give and a booth to man. On the other hand, I was a podcaster with fans who wanted to meet me, which was really cool (and evidence is shown in the picture at left). And on yet another hand (clearly borrowed from someone else), I was a fanchick meeting cool people I never imagined I’d get to transform from professional acquaintences to new friends.

One of the surreal things about the field I’m in is it is occupied with folks that do really cool stuff that puts them in a special, “Wow, you inspire” category. In our modern society, this category is often reserved for actors and politicians (not that they always inspire), but sometimes others get to sneak in, like Steven Hawking. I think it is safe to say, for the science knowing among us, he is as well known (and far more well respected) than Tom Cruise.

I did not get to meet Tom Cruise or Steven Hawking this weekend.

I’m okay with that. 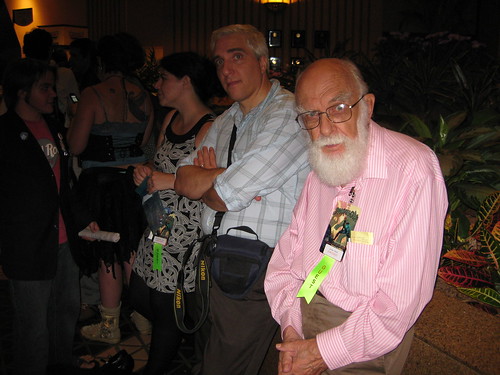 I did get to meet a series of celebraties who have earned their place in their fans hearts (mine included) through intellect and achievement. To me, these are the people to fan chick all over, and these are the people that make Dragon*Con so uber cool to me. Last year I had the oppurtunity through my work for IYA to meet a bunch of celebes. I was calm, cool, and IYA dedicated until I met the MythBusters and regressed into a 12-yearold girl as I thanked them for their work. This year I was frankly too busy to get to play at all in the room they store famous people in during business hours. That’s okay, the cool kids were all giving talks in the Science, Space, Podcasting, and Skeptics tracks (and the Mythbusters weren’t here anyway). These cool kids, are the folks who through their brains and creativity have made a name for themselves by trying to educate those around them in a variety of ways. The biggest name among these people is the Amazing James Randi (pictured at right with myself in the background and neuroscientist Steve Novella in the middle). Randi and I were both asked to be on the Skeptics Guide to the Universe, and I had the pleasure of sharing lunch with him on Monday (where is did some magic!!). While it is really cool that Randi can do things with playing cards that defy all my ability to explain, the reason I respect him is he has dedicated the past several years to fighting fake psychics (not that I believe there is another kind), debunking the paranormal, and challenging those who claim supernatural powers to prove it in a testable way. Through his Educational Foundation (which Phil is now president of), Randi has worked to effect positive change using a name he earned through his excellence with magic.

Randi was just one of many people there I had the pleasure to meet who areÂ¬â€  intellectuals, critical thinkers, and effectors of change. Also on my list of people whom I can’t believe I got to know whom I already respected were: DJ Grothe of Point of Inquiry, George Hrab of Geologic Podcast (audio NOT not not safe for work), writer Michael Stackpole, the afore mentioned Skeptics Guide to the Universe crew who I’d only known as voices on skype, podiobooks Evo Terra, writer Scott Sigler, several SkepChicks (particularly ARealGirl was amazing to hang with), and finally a crew from the Skeptics Tank down under. I spent a lot of time trying to get explainations of slight of hand magic tricks out of DJ and Richard Saunders (of Skeptics Tank), talking about how to inspire critical thinking with all of the above, and just being human. That was perhaps the coolest part of all: As we relaxed into the night, I got to see people be real, laugh, and just demonstrate their personal sillinesses. George kicked into random fragments of song, and Richard folded the most amazing things our of any and all scraps of paper. In the background, Phil talked Death from the Skies and JREF, while Evo and his fantastic wife (whose name I’ll protect since I’m not sure she’s a public person) kept us laughing.

In our society, it is rare to think of the smart heros – the scientists, writers, neuroscientists, and other intellectuals – as silly fun people. I wonder how many people leave science and engineering because they lack role models who have public images that are fully human – both smart and fun and feeling. Through our blogs, podcasts, and public talks, perhaps each of us can work to give a more “every (wo)man” humanity to our the personality behind the information we struggle to teach. 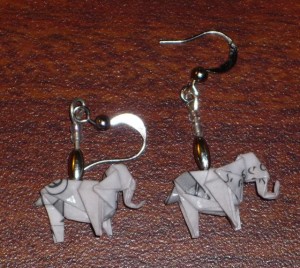 As I played after hours, perhaps the two things that amazed me the most were the bits of magic and orgami I saw performed. Richard Saunders made the most amazing things. Attached is a picture of elephant ears he somehow made without using tweezers! (If you see him, see if he is selling them – he was at Dragon*Con)

This weekend wouldn’t have been possible without two really important people: Derek and Swoopy of Skepticality. These two people really don’t seem to have a selfish bone in either of their bodies. They have both worked tirerlessly to birth the podcasting movement, and their show is one of the longest running in science and medicine. While I’ve been podcasting as long as they have (literally – we launched Slacker within weeks of them launching Skepticality), they have been working their butts off to help podcasting of all genres in ways I respect deeply. All this work has gone on in the face of all sorts of chaos (read their about page). Derek and Swoopy have helped me many times over the years, and my hat is off to them and the exhausting amount of work they have done.

Swoopy has magical camera avoidance abilities, but I present in parting for the night a group picture with Derek in the lower left, with James Randi, myself, and Evan Bernstein. Thank you Derek. You made this happen for me, and help me find a new group of smart, diverse, creative people I hope to learn to call friends. 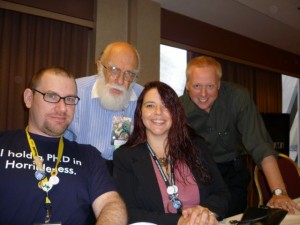 I am home. I teach tomorrow. The mundane world presses in as I look to my grants, my research, and my classes. The rabbit hole has been re-hidden by the weeds of life for another year.