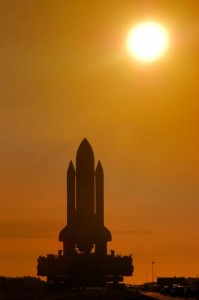 The other day I had one of our first year graduate students ask me what I know about NASA. “I know some people on some of the science missions,” I said, and I asked him why he was asking. Truth be told, he, like so many other bright, athletic minds, wants to be an astronaut. At 22, with a number of nice accomplishments under his belt, he just might have a chance. He’s young enough. By the time he ‘s ready NASA may have manned space flight again.

As for the dreamers of my generation? We’re pretty much… Well you know what word goes there.

According to NASA, the average age of someone accepted into the astronaut core is 34 (my age). It then typically takes a few months to a year to be selected for a mission (if you ever are selected), and then another half year or longer to train for a mission. My guess would be that someone hired in the current round (and NASA is currently hiring astronauts) would get their first opportunity to fly in late 2011 or so.

Except I don’t think we’ll have a manned government funded space program at that point in time. And it scares me how little people are aware of this.

Here are the facts:

Getting the Constellation program going is far harder than anyone seems to have previously anticipated. This is going to be a rocket that makes the Saturn V look average. To get it to work, everything has to be rebuilt, from beneath the ground on up. Literally. The Crawler may not be able to support the Ares rockets’ weights and the Launch Pad will need to be restructured for this taller rocket. These are rebuilds not fully budgeted.

I have to admit that I’m afraid that if the cost overruns for the Constellation program become too great, it will simply be canceled. This has happened before (e.g. the X-33 and see also).

Needless to say, as I look at the facts as I can google them, I’m not going to apply for the Astronaut core (actually I wouldn’t anyways – I enjoy teaching too much). And, I’m going to encourage students interested in the astronaut core to get to know the non-NASA space cores. As we move into the future, I’m hoping that the commercial space agencies may somehow find a place in space doing science now and then.

Just as I fear NASA is about to enter a period without a manned space program, I also think that thanks to Scaled Composites (who will bring us Virgin Galactic) and Bigelow Aerospace commercial space flight is going to become what Concorde flights were in the early 1980s: expensive but possible for anyone who wins the lotto or makes a killing on the stock market.

I have very mixed emotions about how I see NASA’s role in space slowly dieing just as I see commercial manned-space on the verge of becoming something great. NASA needs astronauts as construction workers and repair artists (really, what they’re doing to the Hubble Space Telescope is art). Most science in space can be done by robotic probes, but fixing and building often needs hands. We need astronauts. I’m just not convinced we need as many as we have. As someone who once wanted to be the first Journalist in space, I still hope to someday get my ticket, but I don’t know how to advice my students any more. The best I can say is work hard, try hard, prepare for everything and learn Russian and/or Chinese. And have a plan B. NASA probably shouldn’t even be plan A. Maybe Plans A through D …

I hate giving advice that tempers dreams. I hate that NASA is breaking my heart all for lack of funding.

(If we leave Iraq, can we please send 1 months worth of war funding to NASA? Please?)

This blog is not showing up in Google on the first page of searches for my name or Star Stryder or starstryder. I have no idea what’s going on. If anyone has any ideas, can you please email me? pamela at starstryder dot com.