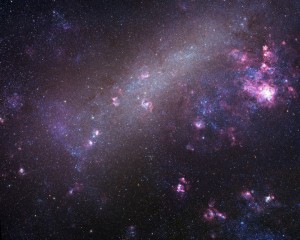 I have to admit, there is a soft spot in my heart for conference proceedings. Once upon a time, when you wanted to quickly dive into a new area of astronomy you went to the university or observatory library and searched out the ASP or IAU conference proceedings on the topic of your passion, and then wandered off to read it cover-to-cover. As an undergrad, I got my introduction to pulsating variable stars that way, and in graduate school I am guilty of losing 4 cloudy nights of my life to a periodical on cataclysmic variable stars for no particularly good reason. Today, I teach at a small college that doesn’t have astronomy conference proceedings in its library, so when I want to get my fill of something new, I either have to fork over the cash, or wait on arXiv for something new and exciting to appear in a burst of related papers. One such burst is currently unfolding, and the topic is the Large and Small Magellanic Clouds. Back in late July there was an IAU symposium on these two nearby systems.

The Large and Small Magellanic Clouds are a pair of nearby irregular galaxies that everyone thought were orbiting the Milky Way galaxy in a death spiral. The way it was taught, these two systems, visible to the naked eye in the Southern Hemisphere, are orbiting the Milky Way. as they go they appear to be leaving behind a faint trail of material as they go, like a slug’s train across the sidewalk. According to the story, they are a binary pair, with the Small Magellanic Cloud orbiting the Large on a nearly circular orbit. It is/was believed that the two systems collided about 200 or 300 Myr ago, triggering star formation and maybe even causing the 30 Doradus (Tarantula Nebula) star forming reason to form.

This is the standard story. Heck, I’ve told this story several times on Astronomy Cast even.

The thing is, we’re not entirely convinced it is true.

Back in 2006, a team of astronomers lead by Nitya Kallivayalil published Hubble Space Telescope observations that seemed to indicate that these two galaxies are actually just passing through. According to their measurements, the galaxies are moving tangentially at 370 km/s relative to the Milky Way, which is 100 km/s faster than we thought and also fast enough that they should just keep going, moving past the Milky Way on their journey through the Local Group of galaxies (which they shouldn’t leave – they are gravitationally bound to the group.) This measurement was the final word on the matter – The authors acknowledge that more data is needed, and they even tried to get that data with Hubble’s high resolution ACS camera, but it failed, and they couldn’t do the follow up that was needed. So, while they wait for Hubble to get repaired, they did the next best thing – They reanalyzed their data looking for every possible error they could have made. It turns out that it still looks like the LMC and SMC are just sweeping by.

This has some rather serious effects on our understanding of several observations. First of all, there is a stream of material that is “connected” on the sky to the two galaxies. This material is referred to as the Magellanic Stream, and it was thought that it was made of material gravitationally torn off the systems. We refer to this as a tidal tail. The catch is, tidal tails typically don’t form with so much vigor during a pair (or in this case a trio) of galaxies’ first encounter. The location of the Magellanic Stream is also wrong, given our new understanding of the galaxies motions. And it also looks like the Small Magellanic Cloud can’t be orbiting the way we thought either.

Since 2006, astronomers have been working hard to try and solve these problems, and at IAU Symposium #256, they met at Keele University to sort out some answers.

The first big problem is the Magellanic Stream. Using some very pretty models, a paper by Besla et al shows that this string of material could have been created through interactions between the dark matter halo and regular matter halo of the Milky Way Galaxy and a former disk of gas (an extended HI disk) around the LMC. If the LMC has once had a disk of material around it and the disk hit the Milky Way at the right angle, a process called Ram Pressure Stripping could have stripped off the disk to create the Magellanic Stream.

And put together we have a new understanding. It now appears we are seeing these two binary galaxies as they slowly spiral together, and they just happen to be passing by us as they engage in a death match of sorts.

As was stated at the top, these results still need more followup observations. They need the Hubble to be fixed. But this will come. Soon. Sometime in the next several weeks hopefully.

In case you haven’t seen this yet, let me share the most amazing image of two Shuttle’s lined up waiting for launch. The foreground craft, Atlantis, will be going up to the Hubble Space Telescope to install new instruments, repair the old, and service several parts, including gyroscopes used to control its pointing. But that’s a story for another post. 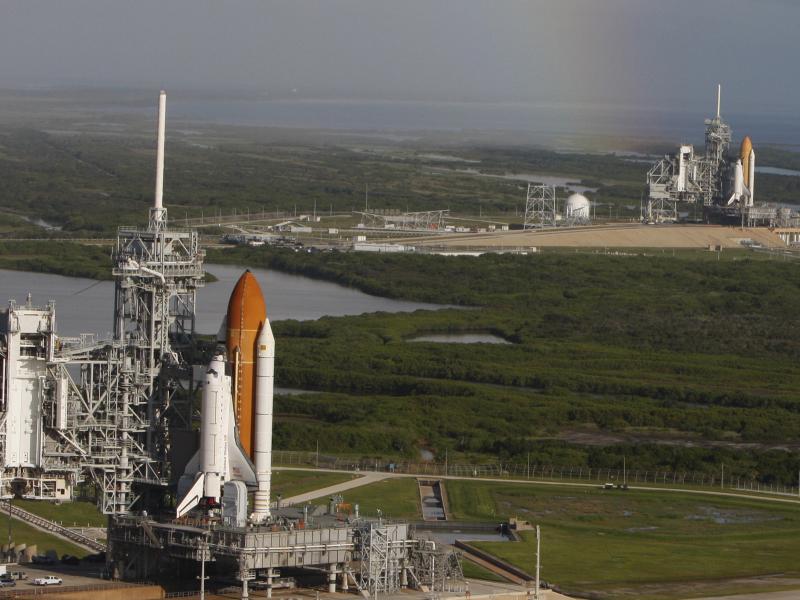 Atlantis and Endeavour on pads 39 A and B. Credit: NASA