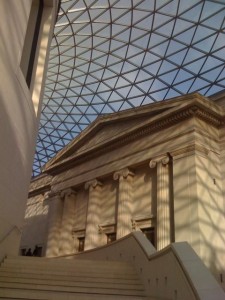 So, I have to admit to being a bad person today. I snuck away from working for several hours to explore the British Museum. It was an amazing sun filled day and light streamed in from the sky lights, bringing the outside in to illuminate 1000s of artifacts gathered from around the globe.

One of my favorite pieces of sculpture is at the British Museum, and after getting lost among roomfuls of historic coins, I got to take in what is advertised as the Horse of Selene. I used to have a magnificent horse named Quantum Leap. He died a number of years ago, and there is something in this statue that reminds me of his fight. It is perhaps a foolish thing to compare my own old warm blood to a steed of the Gods, but if Zeus or Apollo are offended, they are welcome to strike me down.

After drinking my fill of the horse of Selene, I took a few, um, hours to wander the world, exploring the artifacts of Africa, Asia, and all the ancient Mediterranean. As I walked from one dead society’s relics to another’s I couldn’t help but think how sad it would now be to visit the sites where these statues once stood.

I love history. I’m not an expert at any of it, and I tend to be poor at remembering details of dates and battles. That said, I love reading about culture, philosophies, and the significance of architecture (and I admit to periodically binge reading archeoastronomy texts). I’ve always dreamed of taking either a biking tour or equestrian tour through the various ruins of Greece, Italy, and/or Turkey.

As I walked among the collections of ancient art and religion I couldn’t help but think about these dreams and think how frustrating it would be to be in Greece (or Italy, or Turkey) staring up at a marble facade that some European antiquarian had carefully stripped of all the interesting bits to put them on display in London. How sad to be there, in that moment, thinking “Well at least I saw the rest last time I was in the UK.”

The thing is, I will, in this fantasy future, be able to say, “Well, I saw them.” There are generations of children growing up in the land of origins for these pieces of art who will never get to experience the full beauty and detail of their heritage.

I know the return of looted, purchased, and otherwise purloined goods is something many governments take very seriously. But you can’t really make a foreign museum return something. Especially when returning these works to their points of origin would subject them to pollution and potential human destruction (war, graffiti, harm from road vibrations, etc)

As I walked, I grew more and more disturbed by this stolen culture. But then something caught my eye. One of the removed roman pillars had a picture beside it explaining that all the original pillars, all shaped like beautiful women, had been removed from the original temple, but in their place now stood a series of replicas. These replacement pillars could happily stand up against pollution and other forms of decay as the sacrifical lambs of the archeological world.

On the flip side, in the Japanese collection were a series of replicas of historic pieces that aren’t allowed out of Japan. These carefully constructed reproductions allow me to taste the art Of Japan from the heart of London, giving me a reason to someday hopefully see some of the original pieces in person.

Admittedly, there are those who would say another word for replica is forgery. But, if we are finding ways to perserve originals and guaruntee access to as large a population as possible, isn’t this a good thing?

I came away from the Museam a fan of replication. I think I’d someday be satisfied to sit on a hillside in Greece (or Italy, or Turkey) and stare on a modem marble replica of a temple of Athena knowing the original was safe inside some museum somewhere.