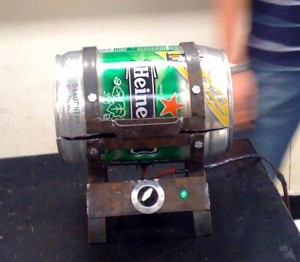 As I think I’ve mentioned before, this semester I’m teaching good old fashioned physics. More specifically, I’m teaching the second semester (E&M) half of calculas-based physics for scientists and engineers. I somehow ended up with a class of 47 boys. While this course generally is predominantly male, the zero girls is unusual and it has led to an interesting dynamic. The machismo of this group was in full play yesterday when they presented their electronics projects. Their assignment was simple: In groups of up to 5 students, while spending no more than $5 per person (although they were welcome to dumpster dive anything they wanted), build something that had atleast three components. This meant they could do anything from build a simple motor or generator to building a coil gun or taser.

Seriously, coil guns and tasers appeared in large numbers. I’m really really glad my students generally like me because if they’d wanted to they could have totally taken me out. (Admittedly, they are on average bigger than me, so they could have taken me out anyway, but it is even more intimidating when they have scary looking homemade, giant spark generating tasers).

To get a good grade, students didn’t have to do anything amazing. In a class that has both electrical engineers who graduate in May and Bio majors in their second year, I have to allow for differences in background and skill level. Still, while I wanted to have level playing field as far as grades are concerned, I’m not above encouraging creativity via alternative means. Specifically, I told the students I’d let them vote for the best projects, and I’d buy gift certificates for each member of the winning team for a local restaurant. At the end of the class there were three projects that stood out from the rest, and with 47 people voting, 28 votes were split between these three projects.

And they earned their status.

The two tied for runner-up projects were radically different. On one side we had the above pictured Heineken Electric Keg Grill. They took apart one camp grill and reassembled it inside a half Keg and added a light to indicate when it was on. They quite happily heated a handful of wieners, and the room smelled like a nice friendly tailgate. On the other extreme, a student built a hydrogen generator.Â¬â€  There is nothing quite like creating explosive gas on demand!

And these were just the runners up.

The winning project made our classroom smell like burnt deodarent. Seriously. I kid you not. Burnt deodorant. I really wish I’d had my video camera. One group of guys built a low power rocket from a disposable camera, some wire, an empty soda bottle, and, um, deodorant. They basically used the plans for taser but built it so that it sparked when triggered. They then had the two wires that did the shocking come out through a soda bottle mouth-sized container mounting pointing. To turn it into a rocket launcher they sprayed a bit of deodorant into the soda bottle, mounted it, and then fired the camera to send a spark into the deodorant filled container. When the deodorant ignited (that would be the smell of burnt deodorant), the bottle launched toward the ceiling. It Was Cool. When asked, “Why deodorant?” the guys responded with sheepish grins that they just didn’t have any hairspray. (It was Tag deodorant for those who worry about such things).

Students are fun. I love teaching and project days tell me they can have fun with what they’re learning.