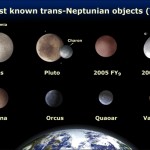 This year’s Masursky Lecture is being given by Alan Stern. Stern seriously earned my respect last year in the face of a disgruntled room of geophysicists who didn’t have the nuclear engines they needed, who’d been told that Mars was not a funding priority, and who had been saddled with manned moon plans. He handled them all with respect and then left NASA the very next week. I’m glad the world of science has grabbed him back from the clutches of administration.

His talk focused on who planets are defined and classified. As we gear up for this summer’s IAU General Assembly, many folks are wondering if (hoping really) they will clarify what is and is not a planet.

As a starting point he explained that the discussion originated from the IAU trying to sort our who had the responsibility of naming Michael Brown’s then new discovery of an object that is bigger than Pluto. Should the small body committee name it? Should the planet committee name it? Or…? Well, clearly someone had to decide what a planet is and is not.

The criteria that was landed on and voted on, however, aren’t the most sensible. Here they are:
1) A celestial body that is in orbit around the Sun (but this precludes exosolar planets from being “planets”)
2) Has sufficient mass so that it assumes a round hydrostatic equilibrium configuration (this means it’s bigger than the asteroid Juno, and most Moons count)
3) It has cleared the neighborhood around its orbit (Ummmm – there is random stuff in the orbits of *all* the planets.)

Let’s look at this last criteria a bit more closely within our modern understanding of the solar system. Prior to 1992 we didn’t have evidence there was a Kuiper Belt and we didn’t have evidence of other planets. Our understanding of planets was based on our own 8 planets + Pluto. Once we started realizing the dynamic range of planets (and stars) are very different, we needed to reconsider everything.

Mass is an easy criteria to consider. Can an object know it is large? The answer is simply yes. Once an object gets large enough gravity makes it round. Period. This is a good starting criteria for “Could be a planet.” Keep lumping on mass and eventually they start burning stuff in their cores. That would define the “Could be a star” boundary.

But mass does not effect the other criteria. An object of a given mass doesn’t always orbit the Sun (look at Ganymede and Titan – both very planet-like moons).

What it takes to clear an orbit via either scattering or accretion also depends on the size of the star and how far an object is from the object it orbits. In our solar system, if you stuck the Earth out at 40 AU (Pluto’s mean distance) it could not clear its orbit! It would fail the “What’s a planet?” criteria for the exact same reason as Pluto! In general, as the mass of the star goes up, planets must grow, and as planets move further from the star, they must be bigger to clear their orbits. (For those into the numbers, for a planet to clear it’s orbit it must have a mass where M_planet > ~G^(-3/4)T_system M_star^(1/4) a_planet^(9/4) )

Why is it do hard to define a planet? Well, the problem comes with finding a starting point and finding consensus. Today’s criteria aren’t really based on anything that describes the geophysics of the object. A brown dwarf star could get classified as a planet! As we rethink our definitions, Stern encourages us to each find our own way of looking at this problem and to look at intrinsic characteristics that distinguish planets based on their physical properties. If you look out at the largest Kuiper Belt objects (Pluto and its roughly same size friends, all of which are over 800 km in diameter) you find a set of objects that are all like the terrestrial worlds in terms of similar formation, sometimes have atmospheres, sometimes having moons, and otherwise looking and acting very different from their asteroidal cousins.

People tried very hard to get Stern to make a recommendation on what should and should not be a planet. He gave us two bits of advice: Make up our own minds, and do not let the “Well if there are too many planets my kid won’t remember all their names” issue bias us (after all, we have more than 12 states in the union).

So go forth and think. And tell your local IAU representative what you think should make a planet.