The Eclipse of the Century Part 1 of 3: There and back again 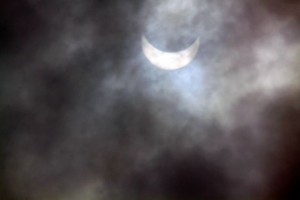 Waking up in my own bed today, I felt a little like Alice waking beside the rabbit hole, not sure if the adventure of my last week was real or not. Luckily I have pictures to confirm the reality of the past 10 days.

On July 15th, I flew from St Louis, MO (38Â¬âˆž 45′ N, 90Â¬âˆž 23′ W) to Shanghai, China (31Â¬âˆž 14′ N, 121Â¬âˆž 29′ E), traveling 11 timezones and ~148 degrees around the globe. I was on my way to join the Eclipse of the Century tour group to board the Costa Allegra and chase what was the longest eclipse of this century, at just over 6 minutes. Along the way we would explore the South Korean island of Cheju (also spelled Jeju), and the Japanese cities of Fukuoka, Nagasaki, and Kagoshima. After the last of these cities we headed down the eclipse path center line to 126Â¬âˆžE, before heading back to Shanghai and flights home. This trip wasn’t pure astro-tourism for me. I was onboard as one of the two lecturers, along with fellow new media / Galaxy Zoo collaborator Chris Lintott.

For me, I have to admit that with the exception of Nagasaki, each day on land was dedicated to seeing a little bit of what was easily walkable and then finding really good food. Our nightly lectures were generally held right at as the boat prepared to leave port, and we couldn’t run the risk that a late return from sort of a tour would prevent us from being prepared. (Ok, so that’s mostly just a convenient truth – getting really good Asian food was one of my personal goals on this trip.) This post is dedicated to these silly days of food and site seeing. 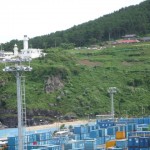 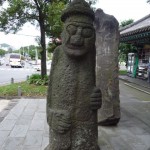 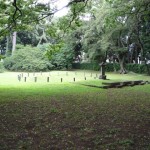 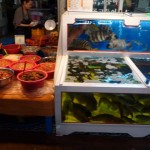 Mid-way through our first full day at sea we pulled into port at the volcanic island of Cheju. Over lunch, I remember seeing random volcanic bits sticking up out of the sea. A group of 6 of us took a pair of taxis to the Samseonghyeol (Caves of the Three Caves) Shrine where three of the Gods of the islands are said to have emerged from their underground caves. Among the trees we were mocked by magpies while enjoying rock gardens and shrines. From the shrine, we walked to one of the city’s non-tourist markets where we explored aisles of fish tanks, fresh fruits, spices, and meats. Some members of our group almost lost their lunch when they saw some tube worms (not pictured) writhing in a tray next to a little old women gutting fish, but I am proud to say I made it through okay, waiting to loose my stomach until a few days later. Heading back to the ship, we stopped for kimchi and and fish, buying some fruit wine and wishing we could get the magnificent cooking mushrooms through customs. 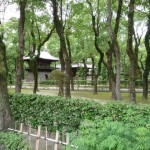 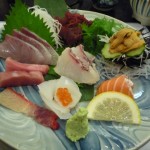 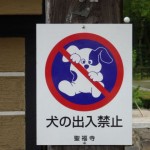 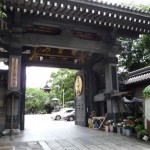 Overnight the ship sailed smoothly to Fukuoka, Japan, arriving while we slept. Japenese immigration demanded our presence by 9:30am, something we hadn’t quite expected, and we found ourselves on shore with not too much of a plan. At the suggestion of our map, we went to explore the largest wooden Budda in Japan, along with a beautiful set of temples and Japanese Gardens. On our way back, we stopped at a random sushi place that advertised Fugu, and enjoyed a possibly suicidal lunch. It was a really fabulous experience but I do admit I learned I like my food more than a few minutes dead. We sat at a bar that wrapped around a large, divided fish tank that contained cuttle fish, eel, lobsters, shrimp, and many fish I couldn’t easily identify. Between us and the fish was a walking area just big enough for a friendly older woman to bring us our food, or for the sushi cook to come out and capture the next thing he prepared to cook. It was in watching him slaughter the next groups food that I learned a) cuttlefish do make noise while being killed, b) fish can flop in the most fantastic ways even after being slit open, and c) I would rather my food was dead enough that I don’t have this random fear that my Sashimi will flop. Nonetheless – I love sushi and that was one of my best meals ever. 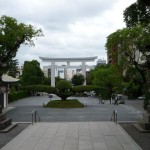 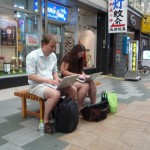 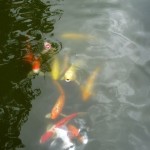 From Nagasaki we sailed through really choppy seas toward our final Japanese port of Kagoshima. It was that night that I learned the fullness of meaning behind the phrase “The British Stiff Upper Lip.” After dinner, Chris and I were holding a Cafe Scientifique while the boat wildly swayed. As time passed, I started counting the minutes as my stomach started flipping. Looking at Chris, he started looking a bit glazed over, and a few people started looking a bit less animated than normal. With 20 minutes to go, I realized I had a choice, leave before or after my stomach exploded. I fled. Chris managed to make it until the end of the lecture, but the next day, while I searched a Japanese pharmacy for motion sickness medicine, he related how he’d commented after I left that people looked a bit green and offered to end early. Everyone claimed to be fine, and while he just kept hold of his own stomach, he and the audience bullied on. I’ve since had numerous reports of people being motion sick, and I’ve decided it takes a special kind of courage to put the possibility of puking in public ahead of the embarrassment of leaving a public astronomy discussion early.

I am fine, and thanks to that pharmacy in Kagoshima, I stayed fine. In addition to shopping in the Pharmacy, I also hit a nik nak shop to do my tourist shopping, and along with Chris hunted free wi fi. (iPhones make it easy). We finally found it and perched in a mall to frantically download weather reports and check through our email. Along the way we also stopped at a Shinto Shrine where several of us got our fortunes. Two of them actually said the clouds would clear, making our trials worth it, and mine said a shadow would pass across the sun as my journeys were good ones. With our hopes raised (or at least amused), we headed for one final sushi lunch before going back to one final night on the boat before the eclipse of the century.

Let’s just say we woke to rain… Here is a taste of our experience. The full story will come in part 3 of this post series. Have you ever had the Sun and clouds so clearly smile down on you before? (image credit Morgan) 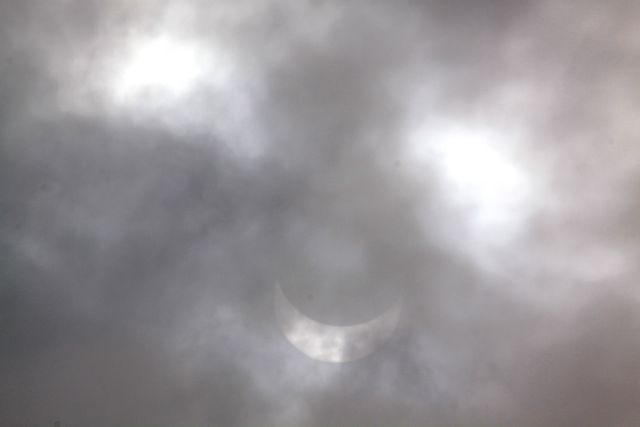