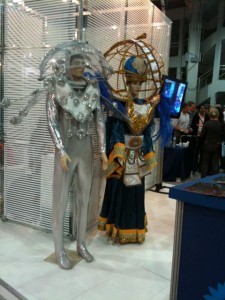 Please don’t ask me why the opening ceremony is halfway through the second day. I do not know. What I do know is the background of the Opening Ceremony is an image of the minor planets Eris, Pluto (+Charon), Makemake, and Haumea.

Anyway, today is the opening ceremony. For the first time, we seem to be running on what I’ve heard referred to as “Brazil Time.” Slatted to begin at 2pm, the event finally started at 2:40pm. All of us are crammed into one large auditorium, with members of the media, press officers, and security guards swarming around the edges of the room with cameras and notebooks, radio-headsets, and video cameras. It is a mass of swarming black suites, and at the front of it all is Catherine Cesarsky speaking calmly behind a huge podium, her strong french accented voice projecting from her diminutive 5 foot frame as she inspires with the story of International Year of Astronomy. This year was in part her dream, and she has worked as president of the IAU to make it happen. She is using this address to say 1 year is not enough. This started years ago, with IAU commission 46 working to promote education and development across the world. As we move forward, there is a 10 year plan to promote astronomy education and astronomy education research into the future.

Beyond IYA, this meeting is allowing all of us to catchup on the quickly evolving field that we work in. From new planets (and planetary science), to stellar parameters, out through to extragalactic astronomy, there are plenary sessions designed to help all of us, no matter what general sessions we attend, to catch up across all of astronomy. Finishing her remarks, she reminded all of us to reminder the Universe is ours to Discover.

Following Dr. Cesarsky, a choir sung the Brazilian National Anthem, and this was followed in short order by a Governor and Mayor, and more politicians. The Mayor is relating that the current Brazilian president is looking to shape his budget to improve science and technology in this country. Rio wants to be at the heart of this with its science centers and universities. He said the only thing that is missing within this “I don’t know the word in English, Astro Kink?” is the Sun. (It is raining today). Following the mayor is now the Secretary of Science for Rio. He is pointing out that it is only in recent years that astronomy has been part of the academic programs in Brazil. Things are changing though, from 12 PhD’s in 1974 to over 250 today, there are now 12 astronomy PhD granting programs and new centers are growing every day.

It is hard to keep track of who is who. The city and state have the same name. We have someone who is for certain the governor of Rio speaking now, so I’m not sure who was speaking early that was introduced as a governor. The program isn’t helping. (Luckily I didn’t quote them.)

The governor is discussing how important space and astronomical exploration (via scope and spacecraft) is for the future of Brazil. As Rob at orbitingfrog points out on twitter, “Brazil is already part of ALMA, Gemini, the Extra Large Telescope, and want to do more.”

After all the speakers were done speaking, the stage was taken over by a band of dancers. I hate to admit that this is my favorite part of the conference so far. I can’t dance to save my own life, but I love modern and Latin dances and have always had a fantasy of having enough rhythm to learn how to dance. This is fabulous. They are doing a whole series of local dances, from tango to carnival dances to folk dances. This is very very cool. One of the things that is also brought home by this performance is the ethnic diversity of Brazil. In America we have this rather horrible false impression that Brazil is a country that ethnically looks like Mexico. This is just wrong. People keep trying to talk to me in Portuguese because I’m about the right mix: A random combination of European and native American. There is a rainbow of ethnicities here, ranging from blond blonds (think Italian blond, not scandinavian blond) to the very very black, and everything inbetween, with the majority being fair to olive complexion with dark hair. The dancers have this mix, and their musical stylings bring together the influences of all sorts of stuff I just don’t recognize, but that make me think New Orleans’ creole meets Caribbean meets West African meets Mayan. I wish I’d read more history before I came here. There is also a mix of body types, with a short muscular man dancing with a women whose shoulders he barely reaches, while a women who in the States would be called overweight dances with a tall frighteningly thin man. Partners keep changing and the diversity is clearly celebrated and embraced. All ages. All sizes. All colors. All dancing for the sake of the dance. All dancing together. It is beautiful.

But all goods things must end. From the IAU opening ceremony we are transitioning to the Grueber Prize lectures.

This is a topic that is near and dear to my heart. Long long ago, in a state that feels very far far away, I found myself with a college admissions essay that asked me what I wanted to research if I was allowed into a very prestigious program I was applying to. Having been strongly influenced by Timothy Ferris’s book “Coming of Age in the Milky Way,” and the story of Henrietta Leavitt in particular, I wrote about wanting to study variable stars and work on the Hubble Key Project someday. While I didn’t get into that program or join the Hubble Key Project, I did go on to work on variable stars, and I have followed the Key Project. If you can be a fan chick for a science project, then I guess I’m a Key Project fan chick.

This year’s Gruber prize is being awarded to Wendy Freedman, Robert Kennicutt and Jeremy Mould for “their breakthrough work in helping establish the age of the Universe” through the Hubble Key Project and their use of Cepheids to determine the Hubble Constant. Freedman is the second women in the prize’s 10 year history to receive this prize (Vera Rubin won in 2002. There have been 15 total awardees counting these three).

In her acknowledgment speech, Freedman is pointing out that this project has it’s roots with Leavitt, and that Leavitt wasn’t even allowed to get a PhD. Things have come a long way in the approximately 90 years, but we still have a long way to go.

Sadly, I’ll have to wait until tomorrow to hear their acceptance review talk. For now, it is just lists of people they are thanking. More tomorrow I guess.

With the end of their list of names, we’re onto the final presentation: UNESCO is speaking on their work with the IAU to create a way to include astronomy sites on the World Heritage list. Currently there are several historical sites that are part of the 890 site World Heritage list that include astronomy: the Kukulcan pyramid at Chichen Itza (Mexico), Newgrange (Ireland), Ulurg-Bek Observatory (Uzbekistan), the Great Pyramids of Giza (Egypt), Stonehedge (UK), Pukava/St Petersburg Observatory (Russia), and Struve Geodetic Arc (Norway).

Right now there isn’t even a mechanism for UNESCO member states to nominate astronomy sites. BUT, the IAU is working to fix that. Currently they are in the process of drafting through ICOMOS a thematic study defining what parameters can be used to define a site as cultural significant based on its astronomical significance. his is needed for ICOMOS to define criteria to judge sites proposed by member States of UNESCO. There are actually no thematic studies of any science topics. In technology there are studies on bridges and canals! These two “Technology” studies are now leading to successful identification of World Heritage bridges and canals.

They are also working with the Starlight Initiative to define ways to preserve dark and pristine sites so that in the future there will still be places where people can go and see the Milky Way with their naked eye.

There is a dream that there will always be places preserved for astronomy – sites with great observatories and dark nights that allow everyone to see the majesty of a starry starry night.

It is a good dream to end on.