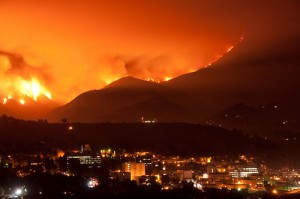 Station Fire with JPL in Foreground, by mbtrama

This has not been a good August for the hearts of observational astronomers around the globe. A few weeks ago, smoke filled the Canary Islands as fires swept toward – but not quite to – Roque de Los Muchacho, home of the 4.2-m William Herschel Telescope . Now, the Station Fire is threatening both the Jet Propulsion Lab and Mt Wilson Observatory (Emily Lakdawalla has a story here).Â¬â€  For the next day or so I suspect much of the space sciences community will be holding its collective breath as we wait to see if these two facilities survey the flames. And while we wait, our hearts go out the scientists, engineers, and staff of these two facilities who have lost their homes to the fire. Fire is a part of astronomy. We didn’t exactly design the system to work this way, but the best places to put observatories are remote mountain tops, and desert air is good for astronomy – water effectively blocks many infrared wavelengths of light. Mix dryness with vast expanses of unpopulated woods and you have the perfect mix for fire. (JPL’s situation is different – it simply suffers from being in California – state prone to setting itself on fire.) Long-term observers from Kitt Peak National Observatory and McDonald Observatory all have their own version of “and then there was fire.” While I’ve never experienced flames closer than half a mile away, I did lose a couple weeks of observing back in 2002 to smoke clouds, and even suffered the complete destruction of a very nice I-band interference filter after it got coated in ash and I tried to clean it with alcohol (there is a reason I should have taken chemistry). While I and my dissertation suffered from that particular fire, I was lucky. Just a few months later,in January 2003, Australia’s Mount Stromlo Observatory was destroyed by fire. That southern summer, fire swept through the regions all around Canberra. On January 19th, the fire burned so hot and so fast across the historic Mount Stromlo causing some of the mirrors to melt as structures crumpled. WhileÂ¬â€  the observatory has re-opened, the memorial there stands as a reminder that astronomy is a dangerous science played in high stakes environments, and we can loose everything in minutes if the wrong summer hits. As I write, JPL and Mt Wilson are both still standing. I hope when I wake they will still be there.