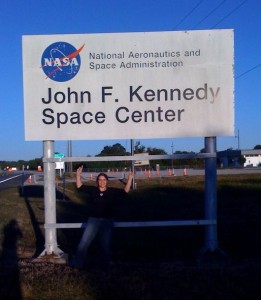 A few weeks ago one of my students pointed out, OMG THE NASA TWEETUP PAGE WENT UP EARLY! While most of us in the room had alarms set off to go off at noon to register for this special event, it wasn’t yet noon, and in a rush of adrenaline and typing we went to the sign in page and used are various autocomplete software to fill out the sign up page as soon as possible. We were all chasing one thing: The chance to attend one of the last 6 scheduled space shuttle launches.

And now I’m here, sitting in a Holiday Inn, waiting to attend a special 2-day event NASA is hosting for folks who interact with NASA via twitter.

Originally, a whole group of us were selected for what was supposed to be a Sunday launch, but with a one day delay and exam season upon, in the end it turned out only Mark Sands and I could come. And I have to give massive Kudos (with a capital K) to the dean of engineering at SIUE for funding all of Mark’s trip. As some of you may have seen, our university (along with all other Illinois state schools) is experiencing a massive funding crisis. With all accounts frozen, approval for this trip had to come from the vice chancellor, and the chair of computer science and dean of engineering went to bat for us to make this happen.

We left Edwardsville this morning on separate flights (just how we kept costs down, oddly) and I spent my day flying (and working on grant – bleh) and then driving with Mark out to the Cape. We reached Cape Canaveral just as sunset hit on a glorious Florida fall day. It was an odd and wonderful experience. 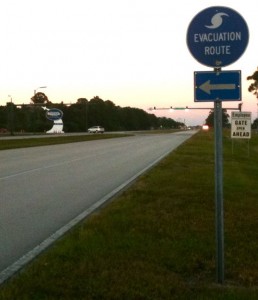 Evacuate through the KSC? 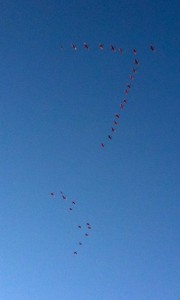 Did you know the hurricane evacuation route goes past the visitor center?

And did you know Flamingoes fly in V shaped formations?

These were just two of the things I learned today.

Tomorrow I expect to learn more substantial information. The mission we are here to see lift off, STS-129, is the next to last flight of the Space Shuttle Atlantis. This is a bit stressful in the same way that starting a really long car ride 5000 miles after you should have had your oil changed is stressful. The Atlantis was due several years ago for a complete overhaul, and was scheduled to be pulled from service pulled from service in 2008. It’s now 2009 and the shuttle should get them there and back again, but it is showing its age. Specifically, the Composite Overwrap Pressure Vesselswere designed to last 10 years, recertified after the fact as good for 20 years, but have actually been in service for 22 years and there is concern they may randomly opt to leak or explode while under full pressure (see this Space.com story). Just like I have successfully driven the 5 hours to and from Chicago in a 10 year old car well past due for an oil change and been fine, I fully expect everything to go great this weekend, and I suspect that NASA will tell us about how they have learned to retrofit the shuttles and redesign around these age issues.

I also expect to learn more about the missions goals. This is one of the rare construction missions that also carries science. One of the experiments it is carrying, MISSE, will be exposing a bunch of different “building” materials to the rigors of space – UV radiation, cosmic radiation, x-rays, extremes of temperature, etc, etc – to see what of today’s new materials are best suited to construct tomorrow’s space vehicles and bases.

Also carried up are spare parts (otherwise known as ExPRESS Logistics Carriers 1 & 2), and two communications systems (S-Band Antenna Sub-Assembly (SASA) package and COTS UHF communication unit). The later of these two will be needed when SpaceX takes over carrying US supplies to the ISS after the shuttle retires.

For now though, it’s off to bed.