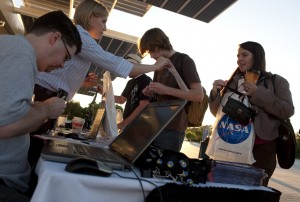 It’s morning and none of us have had enough coffee, but the approximately 100 of us in a conference room in the Rocket part are wide awake. Jon Cowart, Ares 1X deputy mission director, is currently going from table to table asking us to identify mystery items in a run morning mixer.

Earlier this morning (which at 8:18am is a scary concept), after checking in and getting badges and goody bags (and taking the goody bags back to the car), we all invaded a large conference room that NASA has tricked out in perfect fashion for a room full of New Media Addicts. Ahead of time they had sent us the SSID and password for the private network. They set up a power strip on each table (with more outlets than chairs per table!). On the screens, they’re displaying the live feed (using the very cool http://www.twitterfall.com) of the #NASAtweetup tag, and slowly we’re trending and we can watch it and the speaker all at once while creating content on our own computers and phones. They got us all the little stuff we needed. And that really does matter. Thanks NASA (and remember – this was all done as a volunteer effort on top of normal job responsibilities. When I say thanks, I mean it!) 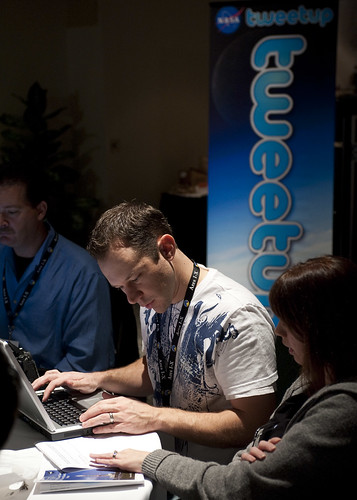 As we came in and plugged in, NASA folks walked around leaving random mission bits on every table. Our table has external tank foam (woohoo? Maybe, woohoo? Ok, not so much. It’s foam). Other tables have hydrazine sensors, compressor valves, aerogel, mysterious chunky substances, what look like vibration dampeners, and all sorts of wonderful random stuff which encouraged us to get out of our nice safe seats, and get out from behind our nice safe keyboards, and to wander around looking at the weird and wonderful bits on other tables.

And, they got the day going by talking about these random items, and using them to transition into a discussion by John Cowart (@Rocky_Sci) STS assembly, moving the Shuttle to the pad, and the moments leading up to the launch of the shuttle.

A lot of what was said is the standard schpell that anyone can read, but he peppered his story with pieces that aren’t usually mentioned and that center around Kennedy Space Center being a nature giant nature preserve. There are nests of Bald Eagles (I think he said 5 nests). Roughly 1/3 of Florida’s manatees live here at Kennedy. There are 4000-6000 alligators scattered around the facility (and I really want to see one). This last bit I had actually known because I went to Space Camp / Space Academy in high school, and back in the late 80’s / early 90s, the end of the simulation showed an alligator on the run way. In real life, NASA has a crew responsible for clearing the runway of sunning reptiles.

There are many weird jobs at NASA: There is the guy who drives the porta potty behind the crawler to the launch pad, their are gator wranglers, and for today at least their are twitter herders.

From @Rocky_Sci, the podium was handed over to Wayne Hale (strategic program planning manager), who explained a lot of the technical details in analogies suited for non-technical types. One thing that seriously surprised me is how this is clearly a room full of people who live online, but who aren’t in careers related to science, technology, engineering and math (STEM). Wayne had us do a quick show of hands – “Who works in…?” and my guess is less than 30% of the hands went up.

It was evidence that today’s world requires everyone to be techno literate.

From Wayne we transitioned to Mike Massimino (@Astro_Mike). It is all going to fast to type, so I’m going to sit back and enjoy.

And soon they’re releasing us to go play… (Join me on twitter @starstryder for picts in real time).