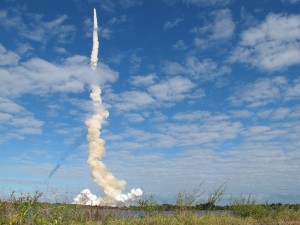 It feels like a lifetime has passed since the Shuttle Launch, but I need to finish telling that story before I can move onto something new. That November the shuttle Atlantis launched flawlessly.

It is all a mosaic of moments: the shuttle astronauts drove past and waved; we all piled out for a group picture; speakers came and went and media came and went and we listened and we didnâ€šÃ„Ã´t and we were interviewed and we laughed. I paused in the middle to record Astronomy Cast – a 10 minute bit for 365 Days of Astronomy actually – and I paused in the middle to work on a grant. There is no escape from real life even when you stand at the edge of the looking glass.

The countdown was counting down, and we screamed out with the NASA announcer, one voice blended from so many.

There was more he said, but we were lost; Mark and I were lost in our binoculars, and Laura watched and fliked photos with her amazing camera. Through my Nikons, the flames caused pain and I had to look away, but I could only take the lenses away for a moment because I wanted to see everything. We traced the Shuttle’s path skyward, watching it pivot belly up to the sky. It climbed, and through the eyepieces I saw the solid rocket boosters drop away as the Shuttle disappeared into the clouds.

And then it was over, the wind whiping away the clouds created by the enginesâ€šÃ„Ã´ combustion. It was over, and it was another day. But it was a day weâ€šÃ„Ã´d seen the Shuttle launch.

We had seen something special as we watched those men launch themselves into space. The image is burned into my retinas and rumbled into my chest, not to be forgotten.The world moved on, and we moved on with it, but we were changed.