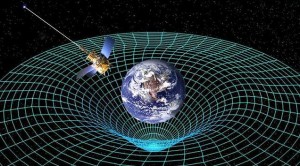 Gravity Probe B orbits earth, captured in its gravity well

Sometimes analogies just feel right. For instance, “as hard to find as a needle in a hay stack” is often a good way to describe trying to find a needed quote in a half-remembered book. The mental image and the actual task just fit. In physics, I sometimes feel like the hardest part is finding the perfect analogy that will make it possible for everyone in the class to visualize the concept I’m trying to explain. In the case of gravity, Einstein kindly provided the needed analogy. He said the way we need to think of gravity is as a divot in the 4-dimensional space-time reality, where orbiting objects simply roll around the inside of the well, like bicylcists racing around the sides of a velodrome. Ok, so maybe that analogy is a bit more challenging to follow. Nonetheless, in all its complexity this analogy points us toward one idea: If space were a surface instead of volume, the surface would curve down toward anything with mass, and it would curve more for high mass objects than low mass objects (and black holes may just tear a hole in that surface).

This image of space leads somewhat naturally to a series of complex ideas. For instance, if you suddenly remove a mass from or change a mass on the space-time surface, you can imagine the surface rebounding, with waves moving across the surface as a result of this sudden rebound. We believe this is part of the reality of gravitational waves, which have there definition in much more complicated mathematics. Frame dragging, as well, can be imagined as a rotating body catching at space, a swirling it about itself, forcing a beam of light trying to return to its origins to fly farther to go in one direction than the other. You can think of this like a person trying to run around an in-motion merry-go-round; race in the direction of motion and you are partially carried to your point of origins, but if you go against the flow of carousel horses you’ll have to go an added distance as the the merry-go-round tries to carry you the wrong way from where you want to go.

The next consequence is light gets reddened as it climbs out of the gravity well. You can explain this as losing energy (getting redder) as the light fights its way out against gravity, or if you want to think geometrically, this is just like a person climbing up a hill covers a larger distance, using more energy on foot, if they walk 1 mile as the crows flied than that 1 mile the crow flew. Light changes colour because it transverses hills.

From gravity waves, to frame dragging, and all the way out to the reddening of light rising out of a gravity well, this geometric idea of space is the one my brain understands, and it is the one that Einstein geometrically built for us.

This plays against the ideal of gravitons carrying the news “This way lies a mass, come be attracted” as they fly out from the stars and the planets reminding everything to orbit politely.

Now I have to admit, I don’t read theoretical gravity papers for fun on a regular basis. Life is short, and the numbers of papers coming out each week is in the hundreds. I may have missed something, but one thing I haven’t seen yet is a way that allows one to understand gravity as geometry while still invoking gravitons as the force communicators. It is my hope that either this happens or someone finds a way to detect gravitons soon. Gravitons are massless and so weak that right now we just don’t have a way to detect them. This means we can’t prove they are there. We also can’t mathematically build a theory that unites Quantum Mechanics – the science behind a lot of particle physics – with gravity. As an observational astronomer, I have to admit, I have a certain hunger for someone to explain to me why gravity can’t be the shape of space and time while everything else is particle based.

Hmmm, maybe I should hunt a theorist and ply them with chocolate. Or coffee. Or something stronger.

But for now I split my head between two ideas – particles and geometry – while I dream of a unifying analogy.