Lost in the vastness of space

Tonight I co-gave the opening address at the Templeton Foundation supported Q3 conference on Cosmology and Theology. It was perhaps the most nerve wracking talk I’ve ever given. While I am a Christian, I must admit to being terrified of conservative Christians. I’ve just realized I can’t count the number of churches who have made me feel rejected because I spend my days studying our universe. At the same time, I’ve lost count of the number of scientists and skeptics who’ve claimed I can’t possibly be a real scientist or a real skeptic if I believe in God. Over the years, I’ve learned how to speak safely around scientists, and I’ve learned when to speak unsafely, but the Christians – they’ve continued leave me feeling safer listening to sermons on the radio.

But tonight I gave a talk that began with the reading of Bible verses I selected, read from the pulpit in Asbury Seminaries Chapel. My brief talk was meant to contextualize our place as humans in the cosmos. Aiming for just 15 minutes, it is quite short, after after receiving a few requests via twitter, I’m going to post it here. 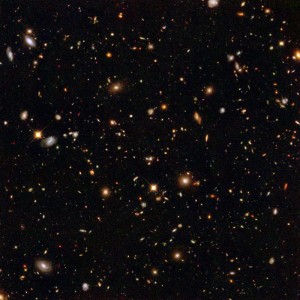 Genesis 1:1-5
1 In the beginning God created the heavens and the earth. 2 Now the earth was [a] formless and empty, darkness was over the surface of the deep, and the Spirit of God was hovering over the waters.Â¬â€ 3 And God said, “Let there be light,” and there was light. 4 God saw that the light was good, and He separated the light from the darkness. 5 God called the light “day,” and the darkness he called “night.” And there was evening, and there was morningâ€šÃ„Ã®the first day.

Romans 1:20
20 For since the creation of the world God’s invisible qualitiesâ€šÃ„Ã®his eternal power and divine natureâ€šÃ„Ã®have been clearly seen, being understood from what has been made, so that men are without excuse.

Good Evening. I have to admit this was perhaps the hardest 1500 words or so I have ever prepared. I am a Christian, and I am a scientist, and most days I find myself dancing a careful dance where I try to avoid verbal bullets from atheist scientists and Christian young earthers. I have learned how to speak safely and when to speak unsafely to scientists, but this is my first time speaking before Theologians. I donâ€šÃ„Ã´t know how far out of your comfort zone astronomy may take some of you. No matter what ideas you come to this conference with, Iâ€šÃ„Ã´d ask you to open your mind to learn new ideas, and in the breadth and magnificence of this universe which cosmology allows us to understand, find God in what is clearly seen.

Here on the surface of the Earth it is easy to see our universe as small and understood. Each year the seasons tick past in explainable ways, and 400 years after Kepler, the motion of the planets is just something we take for granted. Solar eclipses no longer make people tremble as the Asseryians trembled before the 763BC eclipse of Amos 8:9. Instead eclipses are just a roughly twice a year things that thousands of people turn into vacations.

From the surface of the Earth, it is easy to feel safe, and in control because we have the knowledge to understand the universe.

We have science to explain the supernovae, the comets, the ever twinkle and gleam in the sky.

But we are small, and life is fragile in this vast universe, and there are more things in heaven and earth waiting to be discovered than are dreamt of in our sciences.

Our human minds struggles to grasp at the scale of our universe. Any number over a million is simply large, and in discussing the cosmos, we discuss the billions and billions of galaxies, the billions and billions of stars, and distances so vaste that light has not yet had time to travel from most distant galaxies we see in the north to the most distant galaxies we see in our Southern skies. 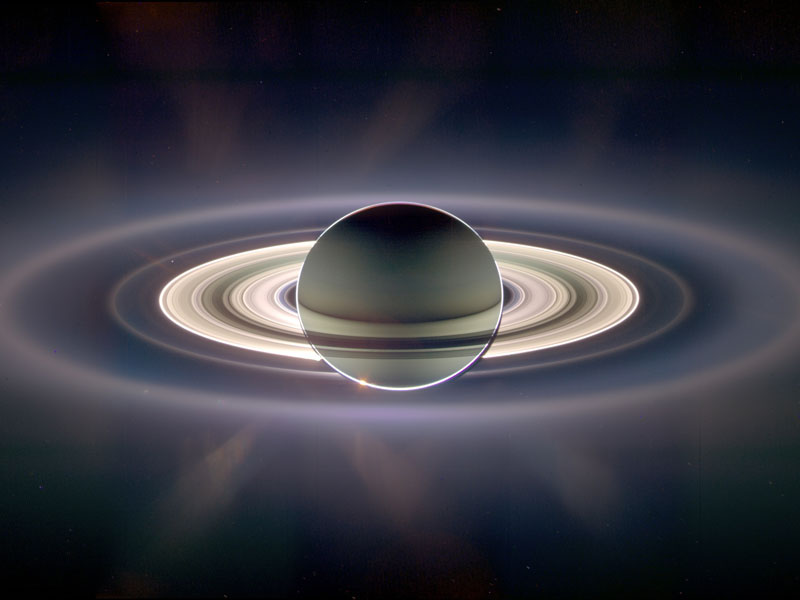 Carl Sagan referred to the earth as Pale Blue Dot and in this image taken by the Cassini space probe, we can see the distant Earth in its smallness. Sagan wrote of our world, â€šÃ„ÃºLook again at that dot. That’s here, that’s home, that’s us. On it everyone you love, everyone you know, everyone you ever heard of, every human being who ever was, lived out their lives. The aggregate of our joy and suffering, thousands of confident religions, ideologies, and economic doctrines, … every king and peasant, every young couple in love, every mother and father, hopeful child, inventor and explorer, every teacher of morals, every corrupt politician, every ‘superstar,’ every ‘supreme leader,’ every saint and sinner in the history of our species lived there â€šÃ„Ã¬ on a mote of dust suspended in a sunbeam.â€šÃ„Ã¹

Not only do we struggle to grasp at our smallness, but we also struggle to understand our place in time.

Our planet is a transitory thing. Formed roughly 4.5 billion years ago, it will be able to support life for only another 50 million years before the Sunâ€šÃ„Ã´s slow increase in temperature makes life intolerable on Earth. In roughly 5 billion years our Earth will be destroyed entirely as our Sun bloats into a red giant and either consumes the planet or simply broils it with intense solar winds. We live in the twilight years of our world, and time is ticking.

But our planet is just part of a cycle.

We live on a rocky world orbiting a star that is rich in heavy elements. If you shine sunlight through the most amazing of prisms to make a rainbow, you will be able to single out dark stripes mixed in the light, many of which arise from Iron, Titanium, and other metallic atoms in the sunâ€šÃ„Ã´s atmosphere.

To get at this richness of atomic diversity, our universe had to be created, and generations of stars had to live and die, all before our own Sun could be born.

When our universe formed, 13.7 billion years ago, it was pure energy â€šÃ„Ã¬ pure light. Within the first fractions of a second, that energy began to solidify into particles. Mass and Energy are just two faces of the same thing, and as the universe cooled, the mass divided from the light. At first there was matter and anti-matter, but through the miracle of asymmetry, for every 1 billion anti-matter particles there was a billion and 1 matter particles. The particles collided â€šÃ„Ã¬ they destroyed one another, and they left behind matter. And that matter, at that moment, and for almost the next 3 minutes, was as hot and as dense as the center of a star and nuclear fusion was able to take place. Protons combined. Neutrons were created. Hydrogen nuclei grew into deuterium, which in turn fused to helium and trace amounts of lithium and beryllium. Our theories tell us the ratios of these reactions, and when we look out at the oldest stars, we find the correct fractions fossilized in the elemental abundances of these ancient starsâ€šÃ„Ã´ light. This is just one of many lines of evidence proving the big bang.

After the first 3 minutes, nuclear reactions shut off, but the universe was still too hot for neutral atoms to form. Everything was an opaque mash of nuclei and electrons and light, colliding. It stayed too hot, and it stayed opaque for nearly 300,000 years, but then one day it cooled enough that the electrons could bond with the atomic nuclei, and when that happened the light was released. Today we see this escaping light as the cosmic microwave background.

The cosmic microwave background demarks the point beyond which we can never observe. It is like the barrier beyond which your headlamp just canâ€šÃ„Ã´t reach when scuba diving, or that place in the fog your candle cannot illuminate because itâ€šÃ„Ã´s just to far away. Our universe, within this shell, is 93 billion light years across, but what we can see is likely no more than a few percent of the whole. But it is all the universe we will ever know.

And after the light separated from the atoms, our universe slowly cooled and expanded some more, but now structures began to form. It was only about 30 million years after the big bang that we believe the first stars lit up the then dark universe. The first stars lit up, the largest of them living and dying in the briefed million or so years. When these first stars died, they rained heavy elements on the gas and dust that was preparing to form future generations.

That stars could form is another miracle of our universe. There is no reason we can identify that the density had to be just right for stars. It could have been denser â€šÃ„Ã¬ and everything could have collapsed straight into black holes. It could have been less dense, and no stars would ever have formed. But it was neither of these things. The universe was just right to support stars, and those stars embedded in the darkness are what allowed life here to exist today.

We live on just one small pale blue dot orbiting a metal rich star. We exist because matter and anti matter were formed in unequal parts. We exist because the universeâ€šÃ„Ã´s density was just right. We exist, because other stars formed, created heavy elements, and died, distributing the elements back into space to form our world and others.

And most amazingly of all, we live in a universe that is at once something we can learn to understand and something that is beyond our imagining.

Every day we are finding new things that defy our theories and force us to expand our ideas – We now know 26% of the universe is made of dark matter – a material like nothing experienced here on earth – and 70% of the universe is contained in dark energy – something we know so little about all we can really do is say we have a name for this rather large blank are in our scientific understanding. And every day we discover new planets in places we never imaged. New galaxies. New types of objects – all things we would have never imagined in our wildest science fiction.

We have been placed in a wonderful universe that is like a palace we have been allowed to explore. The rooms are many, and we can each find our own corner to ask our own questions concerning this creation.

But living in a universe with an amazing underlying physics that guides its evolution, does not preclude free will, or the occasional needed intervention. While A may lead to B it does necassarily dictate 200 years from now we will have D, E, and F occur. We live in a universe not dictated my certain outcomes, but rather one guided by probabilities, and in each possibility there is a chance for the future to be changed, either through the batting of a butterflys wing, through our own decisions, or through the intervention of a greater power – Our God – even if it is just a small voice in the dark reminding us that even in science we should have faith and believe while we look up and explore this amazing universe we live within.

Please don’t flame. Posting this was hard, but it was something people asked to read.