Cassini entered orbit around Saturn in 2004 after a roughly 7 year journey through the solar system. For 5.5 years it has weaved through the Saturn system, in an orbit that has carried it near the moons and over the plane of the disk. Through all of its imaging it has done a whole myriad of science, but at the core of this body of work has been the pursuit of information regarding how are the rings maintained and how do the evolve over time. From observing Enceladus’s geysers feeding the G ring, to the discovery of Daphnis in the Keeler gap, this mission is opening the door to new objects, new physics, and new understanding. 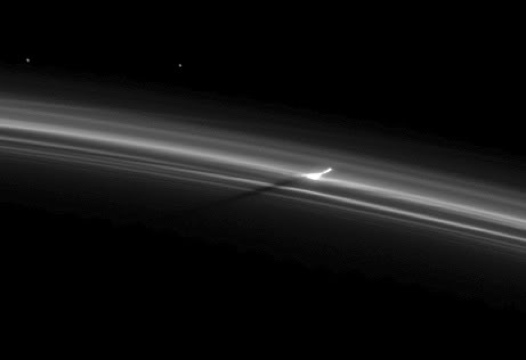 Understanding all this data requires modeling how ring material – generally too small to image with Cassini’s many meter scale resolutions. From these models, hints of features – propeller blades and spokes – get generated. These are transitory
features images by Cassini that are quickly disrupted by tidal effects and other disruptions. While most things imaged in the ring are under and over densities images in the ring looking down, there are also images of vertical structures in the rings that appear in the highly shadowed equinox images. During bits 4 days of equinox,
the sun hit Saturn’s rings edge on, and anything that rose above the otherwise smooth plane of the rings cast a show. Image illuminating a frisbee from the edge so that its show is just a line on a wall. If you now perch a Lego dude on the frisbee, it will cast a long shadow across your frisbee in just the same way. (see image at above)

One of the more interesting findings has been the existence of spiral density waves in the rings. These were first predicted by dynamic computer models that teated the rings like a viscous fluid. These waves – the same type of waves that generate spiral arms in galaxies – create odd distortions in Saturn’s rings (see image at above). While they aren’t as dramatic as their galactic cousins, they are still evidence that science is the same at all scales – from stars and viscous gas in the galaxy to moons and chunks of ice and dust orbiting Saturn – the same concepts, features and rules are observed.