Here in the USA (or I should say there, since I’m currently in France), education tends to be somewhat nationalistic. It has to be. Teachers are tied to state and federal learning standards and if students don’t learn what is specifically listed in those standards, and specifically tested along those standards, schools are considered to have failed. While the national standards were written with the best of intentions to create a more literate population, they have had a stifling effect on creative teachers and creative learning environments. People like me do what we can to get the “fun stuff” (I’m biased toward thinking Astronomy goes in that fun category) into kids outside of school and I think we’re creating some pretty good things. What is amazing to me though is what I’m seeing coming out of Europe & Africa. And what is more amazing is what happens when you combine all the best there is in and out of school from around the world into one afternoon of talks.

Currently I’m in Nantes, France attending the joint Division of Planetary Sciences meeting ( DPS is a part of the American Astronomical Society) and the European Planetary Science Conference. As part of this week-long science extravaganza, there was a session on educational programs that make a global impact. I talked about citizen science (1, 2), and otherwise got to sit back and hear about other projects, many of which are children of the International Year of Astronomy that were able to grow and continue to thrive.

From TWAN: Starry Sky of an Alien Lake by Wally Pacholka

The session started with Mike Simmons of Astronomers without Borders. While Mike and his network date back to before IYA, they really came into their own during IYA with the coordination of 100 Hours of Astronomy. During a few brief spring (North) or fall (South) days, his team succeeded in brining together the world’s population in one global star party. IYA taught all of us that trying to engage the entire planet in one 100-hour span is hard work, and some people are guaranteed to be busy, so in recent years the program has transformed into the Global Astronomy Month, which invites everyone to look up during April. Different weeks and weekends have different themes. Beyond this amazing project, Astronomers without Borders also maintains The World at Night (photo project) and is planning global events for this June’s Transit of Venus. Poor Mike did all he could to pack it all into his 10-minute time slot, but it was to no avail. He was chased off the podium 3-minutes over. Honestly, his programs needed 55 minutes to do them any justice at all.

From Mike it passed to Roger Ferlet and Hand on Universe – EU. This project takes many of the best online / digital astronomy ideas of the past 15 years and does them using real NASA data processed using an interface called SalsaJ. Imagine, instead of using a simulator like CLEA to study the motion of Jupiter’s moons or the pulsations of a star you just looked at Jupiter’s moons and an actual pulsating star. SalsaJ is now on my list of things to learn sooner rather than later, and I’m hoping that if any of you are classroom teachers using SalsaJ, you’ll leave a comment about how you like it.
I went third and then passed the stage off to Connie Walker of the Dark Skies Awareness initiative (They do regular 365 Days of Astronomy shows!). These are the folks that every year bring you Globe at Night, a global data gathering project to measure how light pollution is impacting our ability to see the stars (and galaxies, etc) in the sky above us. In the past, this has been a once a year event involving getting everyone around the globe to look at the equator riding constellation Orion. Students and members of the public turn in information on how many of his stars they could see compared to a series of images, and we get a global reading of the sky. The thing is, lots of weird things can effect light pollution. Snow for instance. If you have a lot of street lights politely pointed down onto grass in parks, that isn’t too horribly bad, but if those same lights point onto snow… Well, that’s a nice mirror of light reflected into the sky. This year, to look at variations, and to see who can participate when, they’re introducing 4 different Globe at Nights events: January 14-23, February 12-21, March 13-22, and April 11-20 (that’s 2012).

With a line up of special events defined for us, the podium (or lack of podium) was handed over to Rosa Doren, a woman who is a force of nature bent on improving teacher preparation on a global level. Working on a budget of sofa change and sidewalk dimes, she has shown us what it means to leverage existing resources. As head of the IYA’s Galileo Teacher Training Program (which is still going strong!), she has brought together a global collaboration of people who are doing teacher training and providing teachers astronomy certification (at a variety of levels) by engaging them in a collections of activities in different content areas. The thing that consistently impresses me about this project is it realizes that schools aren’t all the same in terms of resources, but the same concepts of wanting to engage people rather then lecture at people apply. Don’t have a computer? That’s ok – they have a plan. Have a telescope and the most modern of technologies? That’s fine too. The sets of possible things teachers can do is varied enough to recognize the vast diversity of classroom needs, allowing teachers to learn concepts through tasks matched to their resources. Are you a teacher? Want to get the leg up on your astronomy content in a way that is relevant to the classroom you have instead of the classroom you wish you had? Check out the global listing of teacher workshops on their website. 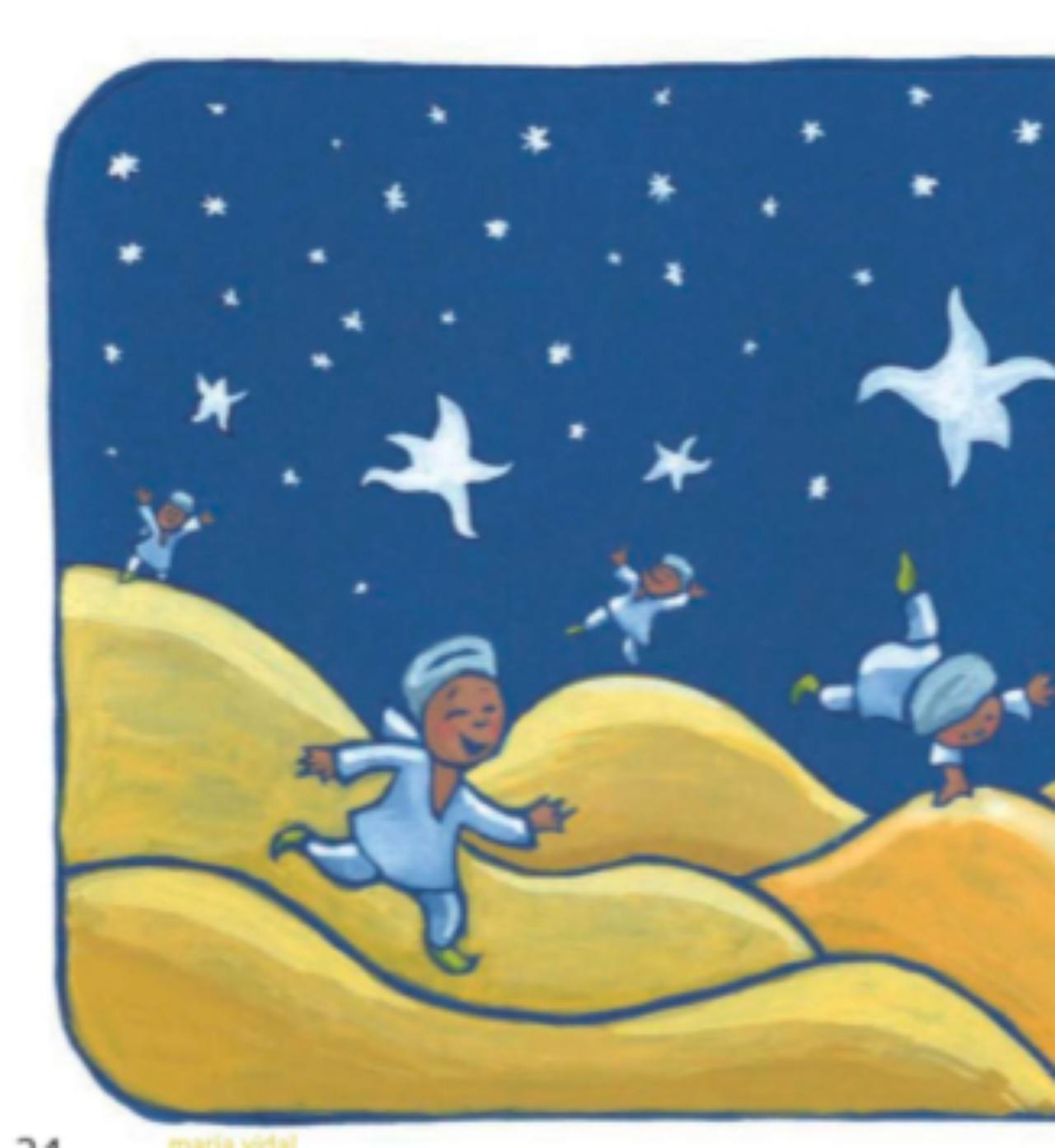 Algol, the Demon of the Sky by EU-UNAWE Spain

The final talk I listened to well was on a classroom project I know I’ve mentioned before: Universal Awareness (UNAWE). Lead by Pedro Russo (formerly lead by Carolina Odman who’s no doing different awesomeness), and presented by a nice younger fellow whose name I didn’t catch, this program is designed to get little kids to love and learn space science through story telling. On their resources page they have a myriad of activities (including signing activities and telescope activities!), artwork from stories telling sky-lore from many different cultures, and all the teacher resources you might want (as a non-teacher, I like to download and print the art). Editions are available in multiple languages. The story that I heard (not told today, sadly) that most made me love this project was actually a story on it’s cultural impact. Through one set of activities, they get the kids telling their stories to a visiting outer space alien (a doll sewn by one of the community parents), and the alien in turn tells the kids stories about space through this curriculum. One teacher reported that after doing UNAWE in her class, an transfer student from a foreign country was seen as an interesting new thing – a source of potential stories and friendship. This was in contrast to how her kids normally treated transfer kids, as well, aliens in the not so warm and fuzzy story telling sense.

So the reason I said “listen well” is today I also learned I’m not really all that compatible with French food. I’m fine, but for a while, sitting a bit dehydrated (beverages are primarily expresso and wine here), and way overheated (no or limited AC and in the 80s), I just decided that rather than listening closely, I’d turn a color that caused a worried friend to ask if I was ok. After the session, I grabbed a couple cans of soda (failing to find hot tea, which I now have), and got to feeling better slowly but surely. I’m now fine, but during a few of the talks I wasn’t listening as much as I was doing a mental inventory of things like water bottles and tea bags I will hence forth always a) bring, and b) not leave on the plane (as I did with my water bottle on Saturday).

Unfortunately, this means the best I can do is offer you a link to the program for the rest of the session. No fear though, Thursday is another education session, and next week I’ll be at an astronomy communications meeting in Beijing (where I am compatible with the food). I’ll report what I hear. And tomorrow (room space willing) I’ll try and get you some science. So far, I fear to say, I’ve been thwarted by rooms with more people than space. Ah well, Emily Lakdawalla is early to arrive and easy to fit into small spaces and keeps managing to fit nicely into all the coolest sessions. Follow her on twitter and the Planetary Society Blog for all the best science this meeting has to offer.