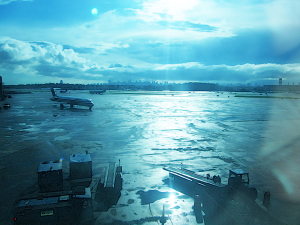 On January 13, 2005 I joined the American Airlines “AAdvantage” frequent flier program. The podcast I was part of, “Slacker Astronomy,” had taken off, and I had been invited to go to AAS in Washington DC and AAPT in Anchorage, Alaska to give talks 2 weeks apart. This was something I’d never really expected – I was just an utterly average scientist working in a mostly instructional role at Harvard. Travel was what the fulltime researchers did, and what the people with “professor” in their title did. My job? I wrote labs on my computer, I built equipment in the machine shop, I fixed the telescope on the roof top, and in my spare time I let my voice play with others online. I wasn’t the one who traveled. But then someone – a few 1000 someones – heard our show. And then someone – maybe a few 10s of someones realistically – read our research. And then I got a frequent flier number.

I hadn’t realized that those two trips and that frequent flier number would lead in so many directions. From Boston I moved to Southern Illinois (I met the department chair who hired me on that Alaska trip), and my title changed to include that word: Professor. I went from being someone on LiveJournal to someone with a Blog. From Slacker Astronomy, I went to Astronomy Cast. And now, according to American Airlines, I and my travel related flights, hotels, and purchases have earned me 813,245 ‘miles.’ I’ve seen every continent except Antartica as I traveled to talk astronomy. I’ve seen Australia, Brazil, Canada, China, France, Germany, Great Britain, Italy, Japan, The Netherlands, and South Korea.* And I’ve seen Alaska, Arizona, California, Colorado, District of Columbia, Florida, Hawaii, Illinois, Maryland, Massachusetts, Michigan, Missouri, Nevada, Ohio, Texas, and Washington.** I’ve slept on planes, ate on planes, a couple of turbulent times I wondered if I’d die on a plane… But mostly I’ve just been that business traveller plugging away on their keyboard in a window seat.

But right now I’m home, and it’s a good place to be.

A couple weeks ago, I was in Boston giving a talk at Boston University. Several of the graduate students asked me what it takes to get to do all the (some would say crazy) things that I do. A few months ago, while else where, I had someone ask “How do I grow up to be you?” Well, um, you don’t want to be me. The inside of my head is a pretty messy place (so is my desk, and my car…) and I tend to fall off horses and hurt my self. Silliness aside, these questions got me to thinking, and I realized that sometime in 2005, quite by accident, I decided to become someone who builds things – websites, podcasts, datasets, class curriculum, words and bytes – and since the 2009 International Year of Astronomy I have been working in various ways to build a network of people I’ve met in real life, and whom I trust, and with whom I can build awesome things. We’ve built 365 Days of Astronomy, and the Second Life Island. Zooniverse came from Chris Lintott and I talking in an elevator lobby at Oxford and deciding to write grants. For basically 3 years, I’ve worked myself ragged doing things I love so that someday, hopefully starting in a few months, I’ll get to stay home a bit more, and sleep a bit more. How is this magical thing known as “Sleep” made possible? Well, I and a team of awesome people at NASA Ames, Capitol College, Arizona State, and here at SIUE just earned ourselves a NASA grant*** that let’s me hire a postdoc. (The job posting should go up in January prior to AAS, if only just barely, and I will make an appearance in the AAS job center). I think I have learned that the key to academic life is to reach that point where you can bring in enough money that a post doc can be hired.

This isn’t to say I’m going to slow down. This blog post is my first sign of not slowing down. Prior to IYA, I was pretty good (not great) about blogging regularly, and with this post I’m going to try to get back to blogging. Those of you who listen to Astronomy Cast know that Fraser and I (mostly I) have gotten our acts together and are recording much more regularly. And, starting after the New Year, we’re looking to add a new video lecture series to what we offer online.

And next year I’m not exactly going to stop traveling. How could I with a Venus Transit visible from Alaska, a Solar Eclipse viewable from Australia, and an End of the World cruise sailing the Caribbean? I’ll earn my miles next year, but the goal is to not have Foursquare congratulate me on spending 4 (or more) weeks in a row in airports.

And I’ll be blogging more.

*** This grant and others, and in partnership with many others – Galileo Teacher Training Program, Astronomers without Borders, the Planetary Society, LRO, MESSENGER, STScI, Dawn and more – is allowing us to build a new community called CosmoQuest. This blog post isn’t about that, but you can click over there and learn bit by bit what we’re working to build. (Launching January 1, 2012.)