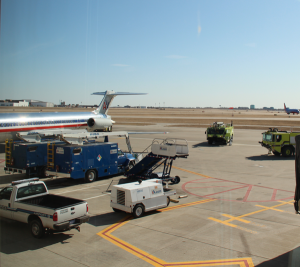 Earlier today I wrote on Google+ that there are day’s when you run head first into the tail-end of the probability distribution. Today was one of those days, and now that it’s over and I’m laying in bed typing, I can happily say I got to see both sides of the Gaussian.

It started as a normal travel day for me. I got up far too early, shoveled myself in and out of the shower and into the car, following the inner mantra, “You were upgraded, it’s ok. They will feed you, then you can sleep.” From waking at 6:30am to being at the airport at 8am to being in the air by 9:30am, all was good. I was looking forward to a meet up with Bay Area astronomy folks, and needed to spend a bit more time on my talk. I had plenty of time for all of that once I made it to San Jose. And if delays happened, that was fine. From St Louis there were many options to get to San Jose via Dallas or Chicago, and once in LA, the same was again true. The calculated risk I’d taken in planning tonight’s meet up was that the sum of my delays wouldn’t surpass 5 hours, and anything that happened would happen in St Louis or Los Angeles, where options were many.

As was pointed out by @sjorge, I fly so much that my time was eventually going to run out, and the improbable was due to happen. Today I think I rolled a Yatzee.

Per plan, I boarded the flight, promptly fell asleep while folks were still boarding, and dozed until a friendly stewardess offered me a drink.

This would coincidently be the same point in the flight when the cabin began to fill with fumes.

Several passages asked “what’s that smell” (everyone upgraded was fearing for their breakfast, never thinking further than food). Then the main cabin stewardess asked the first class stewardess “what’s that smell”. Then we had all the flight staff except the co pilot smelling air vents. The captain kept the cock piut door open as we banked sharply for Kansas City and landed what I believe my ground school instructor would have called “a bit hot.” There was honest fear we might be on fire, and the runway was lined with fire trucks and ambulances as we prepared to taxi somewhere far from the terminal. Luckily, no immediate smoke seemed to be coming from the plane, so they took us to the terminal and let us get off on the gangway.

American handled it as well as could be expected. Those who they could rebook, they rebooked. Those who they couldn’t, they fed and they provided access to the Admirals Club. They had to bring us a plane from Dallas, and it took time. I was one of the ones they couldn’t rebook. They checked Delta, US Air, Frontier – all the options accessible to their computer – and nothing would get me from there to here. So I planned a plan c: Rent a car and drive. (Since I’m giving a talk on Monday – I didn’t want to risk a second day)

As several people pointed out, there were tickets available on Southwest. The thing is, AA can’t transfer me onto a Southwest airplane, and flying SW would mean buying a ticket. As a state university professor I often find myself juggling the “What can I pay out of pocket? What can my funding pay for? and What will my funding pay for that the university will actually agree to?” This last one may sound odd, but I know from experience that while it may sometimes cost less to buy frequent flier miles to pay for a ticket to someplace like Bend, Oregon, the accounting department doesn’t care if it costs less, because they just don’t have a way of coping with that pattern of spending. I also know that flying to Chicago from LA and then taking the train home is not something they can handle either. Weird things just don’t get rationally reimbursed. This means when I get stuck, I have to ask, how can I fix this and not break the system. Here it was easy. My funding can’t afford buying a second ticket, the university wouldn’t let me buy a second ticket, and my personal funding really can’t afford the second ticket. The rental car from LAX to SJC was only going to cost $5 more then the rental car I was already getting, and the gas I could suck up and buy on my own. QED. Rental car it was.

Just as the gate staff in Kansas City were starting the “The flight is on it’s way, we’re hoping for an X o’clock departure” dance, kindness began to spring up in my twitter and G+ streams. There were offers of directions, of lunch in Kansas City (waves at Sarah King), of a place to stay in LA (waves @SurlyAmy), and an enigmatic “Call me at” from someone I’d tweeted with a couple times, but didn’t know the way I’ve come to know many of you over the years and the social media messages. (And anyone who knows me, knows my response to “Call me” is always to Skype someone). So I direct tweeted that person to Skype me, but by the time he had a chance we were getting ready to board a plane with a promise of GoGo Inflight internet.

It was already a long day. We had landed a bit after 10am in Kansas City, and at 3:30pm when we finally took off again, I was ready to just drink hot tea and contemplate mountains below. I was sad I had to cancel our meet up, but everyone was so gracious; I have to say thank you to my hosts in Mountain View – Matthew, Edna, and Michael – who together took care of all the details for me.

Boarding that flight, I found my self back in the same seat on a new plane – one without food – and finally on my way. As we crossed 10,000ft I turned on my laptop and found internets were down. It was fine. I had 3 hours of battery, and 3 hours of work I could do offline. But I missed that Skype invite from that mystery “Call me” tweeter.

Landing in LA, I started walking towards car rental while I worked on retrieving my tweets and mail. One hand worked the phone while the other steered the luggage, and I walked dangerously based on peripheral vision and a fairly robust knowledge of the American terminal at LAX. There was that person again in my twitter stream – checking on me, and offering info that tickets were available on Southwest, and he could help.

I have to admit, on landing in LA I was a digital mess. My laptop was dead, my phone was dying, my iPad was discombobulated by the Edge network. Trying to respond became a matter of sitting on the floor next to an outlet, realizing the internet God was not with me, and deciding to call that mystery number. @Fujiyakumo – another astronomy loving tech head – was offering me a golden ticket to San Jose. A stranger had solved a problem that to me was about to be 6 hours of pain, with a few clicks of a mouse that were clips I couldn’t have made.

After a precautionary mad dash from LAX’s terminal 4 to terminal 1 (where cutting the diagonal isn’t allowed), I found myself at a gate with enough time to get a coffee, a donut, and a jolt of electricity that would carry me the rest of the way to my temporary home at a friend’s. Without @Fujiyakumo’s help, I’d probably still be driving – probably just be getting to the outer edges of the Bay Area mega sprawl. I wouldn’t have my talk ready for tomorrow, and I wouldn’t be curled up in bed having taken photos of the Moon and Jupiter.

Everyday I read stories about scams, and how people bully and take advantage, and how generally online is an ugly place where you need to be able to recognize when you need to click away from a conversation to keep yourself safe.

Today wasn’t everyday. Today I learned the internet is full of good people who want to reach out and help, and who make the world better by paying it forward.

Today was a weird day. It was a memorable day. But the only parts of today I’d really change are getting up at 6:30am and canceling the meet up. Thanks to the emergency landing I now know more about trust and goodness then I knew before, and for this, I cannot thank all of you enough. At the end of the day, today was a good day.