Here at the Lunar and Planertary Sciences’ Conference, I think it is safe to say that Cassini is in the house. From weather on Titan, to seasonal variations on Enceladus, to cracking of Dione, you can’t throw an iPad (those are also in the house) without hitting a Cassini scientist.

I’ve seen so much, I’m feeling a bit overwhelmed and don’t quite know where to start. Emily Lakdawalla and Nancy Atkinson are also here, and maybe the best place to start is to send you to their stories (but come back when you’re done?)

Cassini went into orbit around Saturn in 2004. It’s mission has been extended more than once, and today the mission team has orbital plans stretching out to 2017. This lengthy mission allows scientists to observe how Saturn and its moons are evolving from season to season. The equator of Saturn and its ring system is inclined 27 degrees relative to the Sun, and the orbit is 29.46 years. This inclination means that the two hemispheres of this system (above and below the rings essentially), receive markedly different heating during their summer and winter seasons. Today, Cassini has watched 8 years of seasonal variation, spanning from southern summer through equinox, and now into northern spring.

Each world in the Saturn system responds differently to these seasonal changes. Saturn itself stirs up mighty storms that appear as bright white spots that spread over time into bands that wrap themselves around this gas giant. While this is cool, it doesn’t hold a candle to some of the excitement that is happening on the moons of Saturn. Titan in particular puts on a fascinating seasonal show.

Titan has a thick methane atmosphere that extends for several hundred km above its surface (if I read the graphs correctly). This atmosphere has large scale circulation cells; hot air from the illuminated pole rises, circulates toward the winter pole, radiates its energy, and sinks to then circulate back toward the other pole. This circulation system breaks down, however, as the Sun crosses the moons’ equator. During the most recent, 2010-2011, Saturnian equinox, the circulation stalled. This abatement of the convective winds led to a segment of the atmosphere called the “detached haze” dropping radically in altitude. Shortly after the equinox, massive storms formed in Titan’s equatorial region.

In the wake of these storms, Cassini imaged large sections of Titan that appeared substantially darker, while other regions appeared substantially whiter/brighter. Over time, both the darker and brighter sections gradually returned to their normal colorations, but it was a patchy process. Here on Earth, Landsat and other earth viewing satellites have observed large swaths of land substantially darken after soaking rains, and then dry over time, with areas where the water pooled drying more slowly (for obvious reasons). It is believed this same soaking and drying process is what is being observed on Titan, although the rain is liquid methane rather than water.

It is more difficult to explain the regions on Titan that brightened. We do see this on Earth when snow falls or ice forms, but these substances normally melt, darkening the surface as they soak into the ground. On Titan, this darkening phase wasn’t seen. A possible solution is the formation of ices out of some substance that, like ice on Mars, goes from an ice state to a gas state without ever soaking the ground. Exactly what volitals may be forming this type of ice is unknown.

Beyond the atmospheric changes observed on Saturn and Titan, Cassini has also made a myriad of observations of ring evolution and and the detailed features of a plethera of Saturn’s icy moons. The big walk away message I got was Saturn’s rings are dynamic. There were the expected images, for instance seeing the gravitationally driven ripples that the little moon Dione raises in the rings it shepherds. There were the matches between science and theory that showed how spiral density waves drive spiral ripples through the ring disk. There were the stricking (pun intended) images of fresh white materials getting pulverized in the rings; this is evidence of small bodies getting gravitationally pulled into Saturn’s environment and gravitationally and collisionally destroyed. The rings are becoming understood, and it is awesome to watch the science come in.

From the rings to the moons, the little icy objects spread their data across a myriad of sessions. One of the moon features that came up over and over is the presence of parallel stripes (sometimes/often) seen running perpendicular to an extended crack. In one talk, Karl Mitchell showed a series of well developed linear features on Enceladus, evenly spaced, with thinner, less-defined structures forming beside the pattern with similar spacings. These tiger stripes, technically called ridge and trough formations, are now thought to perhaps be universal on tidally flexed objects where the stress and strain heats sub-surface fluids and drives convection.

The thing that really amazes me is the pace of understanding. The first geysers on Enceladus were spotted less than 10 years ago! Now we know ice geysers may be common, and we are starting to get models on what drives them. When Cassini got to Titan, we knew it had diverse terrain. Now we know Titan has dunes and scarp and lakes and storms that reshape its surface. Cassini has brought the data needed to bring the science a long long way.

I can’t wait to see what the next few years of the mission will discover. 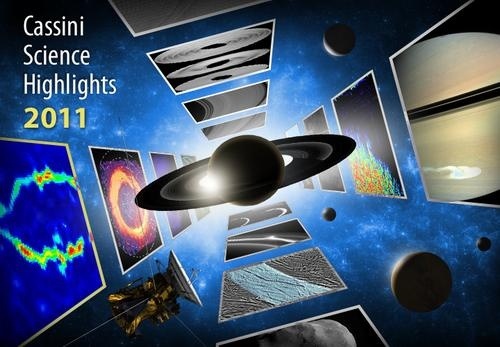