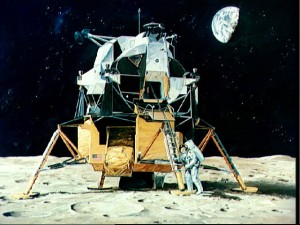 When I heard Neil Armstrong had died, my first reaction was to stop walking and reread the text, curse once, and realize I had no more words. He is a hero who lived an amazing life, a long life, and will remain an inspiration as so many past heros have remained. Its *sucks* that we lost his input on our future, but we don’t live forever and he didn’t linger in suffering has so many people do.

As I walked on, I did find myself pissed off by one thing: We are sooooo close to getting back to the Moon. The Google Lunar X-Prize will get rovers walking, roving, or (in my fantasy world) dancing a happy robot dance across the surface of the moon in the not too distant future. (1 or 2 years I’m guessing). Humans won’t be too far behind once the Falcon Heavy is complete. I only wish that Neil could have lived to see it – lived long enough to know the door he opened on off-world human exploration had re-opened with a new generation of explorers getting out and going farther then ever before.

What ever you believe in terms of after life / no after life, I’d ask you to do one simple thing: *Please raise a glass to Neil Armstrong and thank him for opening the sky for all the tomorrows’ explorers.”