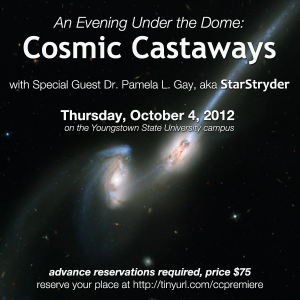 My job let’s me do some of the most awesome things. One of those things is narrating planetarium shows. My 2nd planetarium show is premiering Oct. 4 at the Ward Beecher Planetarium in Youngstown, OH on the YSU campus. We’re taking advantage of this event to also host a fundraising dinner with proceeds going to the creation of more shows just like this one.

Get your tickets now!

Every other night this show is shown, admission will be completely free! This show was produced using funds from the National Science Foundation, and Ward Beecher keeps it’s doors open thanks to an endowment and thanks to donations and grants like the one that produced this show. I love this idea: Raise money to pay the costs associated with producing content, and then give it away.

It is our hope that we’ll be able to keep producing more planetarium shows, and that we’ll also be able to get this show and others like it out to a broader audience by allowing the show to be used at no cost by other planetariums around the world. Yes, you read that right: the show will be distributed at no cost so that your local planetarium can use it to help teach you about Cosmic Castaways.

If you’ve never heard of a cosmic castaway, don’t worry you’re not alone (if you were, we wouldn’t have needed to produce this show!) Cosmic Castaways are the stars that are torn our of galaxies through the gravitational interactions of systems that are either merging or passing near one another. If you want to learn more, you’re just going to have to go see the show (or wait for it to be available on our new website, Science on the Half Sphere on CosmoQuest.