I have to admit, life has gotten sufficiently busy that I’ve lost all track of time and place. Yesterday, waking up in Austin for SXSW Interactive, I was reminded by the intertubes that it is Women’s Month, and yesterday (not today) was International Women’s Day. Scott Lewis (KnowTheCosmos) interviewed Nicole Gugliucci and I about what inspired us and will be posting the video soon. This experience, and a recent talk that I gave at the Midwest Regional Women in Physics Conference, made me take a minute and really reflect on who has inspired me over the years.

For most people my age, there is only one answer: Carl Sagan. For people in their 30s and older, he was the man of science that filled their heads while he filled their small screens.

The things is, for a combination of reasons (including a kind of lousy TV antennae) I never watched COSMOS growing up. I read Contact in high school (and loved it), but other than that one book, I wasn’t really exposed to Carl Sagan and his work until grad school, at which point … I wasn’t totally impressed with his Apple Pie metaphor (likely due to having watched the movie “American Pie”) So…yeah.

For me, inspiration had to come from else where, and growing up in Massachusetts, I didn’t have to look very far to find women role models in astronomy. In the 9th grade, my aunt and uncle gave me a copy of the book “Coming of Age in the Milky Way” for Christmas. During that spring of 1989, while prepping to go to the USSR to study astronomy  as part of a People-to-People exchange, I read that book while driving my parents drove me to Harvard from training workshops. As we drove from Westford to Cambridge, I read about Henrietta Leavitt and Annie Jump Canon and their roles working as human calculators at Harvard College observatory.

It was Henrietta Leavitt’s work that fascinated my 15 year old mind the most. This woman looked through images of stars in the Large Magellanic Clouds (a nearby irregular galaxy visible in the southern hemisphere) and realized that there was a relationship between how frequently a Cepheid variable stars luminosity varies and its average luminosity. In general, more luminous stars vary more slowly than fainter Cepheids. She simply just realized this while recording numbers and making tables, and this realization allowed Edwin Hubble, a few years latter, to observe Cepheids in nearby galaxies and determine that the universe is expanding. 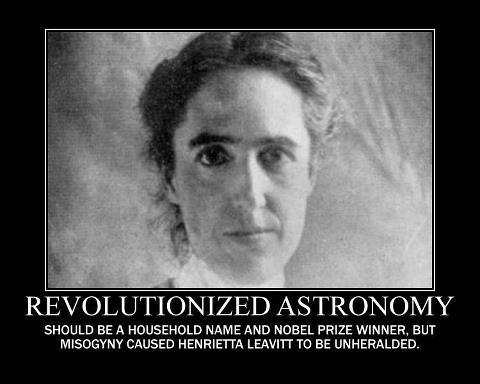 As a young girl who loved to solve puzzles, the idea that finding a pattern hiding in data could produce such an amazing discovery… well, it inspired me. And as a teen growing up near Harvard, I felt like I could walk in her literal footsteps as we continued to use variable stars to understand our universe. When I got to college, I was actually able to study variable stars, and they are, and always will be, my first scientific love.

In 2006, I was able to interview one of the last women to work as a calculator at Harvard: Dorrit Hoflitt. Rather than summarize what she said, I’d encourage you to simply watch the video below.

So no, Carl Sagan never inspired me (sorry). As a young woman going into science, I just wanted my variable stars, and I wanted to see what details Henrietta Levitts stars might have left to tell.