Speaking Truth to Power: The once and future speech 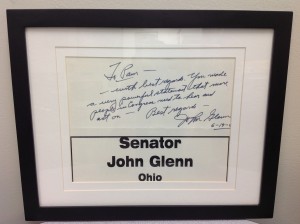 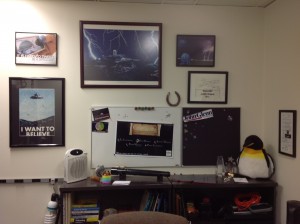 On the wall of my office is a framed piece of paper that I often think of removing because it may just seem too ostentatious. I keep it there for me – not for anyone else no matter what they may think. It is a just a flattened out table name-card like you get at a con, but the name, on it is Senator John Glenn, and on the empty half of the piece of paper is this message: “To Pam – with best regards. You made a very powerful statement that more people in Congress need to hear and act on – Best Regards – John Glenn”. I keep that sign on the wall to remind of that day, June 19, 1996, when at the end of a long day in a Capitol Conference Room, I gave the following speech before “The Democratic Forum on Science and Technology Research.”

“Science is in my blood, passed to me with love from my father. My earliest memories include looking at the moon through his telescope and running between our California living room and backyard to compare a fuzzy speck in the sky with the zoomed in image of an inbound space shuttle on TV. As a high schooler at space Camp I pretended to fix the Hubble, and designed award-winning space stations. Back then my greatest fear was that by the time I earned my Ph.D. it would be too late to work on a US space station, that I would be too young to help build it, too young to design experiments, I feared that my astronomy questions would all be solved before I even finished school.

“My love and knowledge of astronomy has opened many doors for me. In 1990, I participated in the international youth science Olympics, and won this gold-medal in astrophysics. The following year I spent eight months studying astronomy in the USSR at what was then the world’s largest telescope. While in college I spent four years performing publishable research, and thanks to the National Science Foundation I have worked at the National Radio Astronomy Observatory, I attended a meeting of the American Astronomical Society and I am working on a project that will utilize the Hubble Space Telescope.

“Now, I stand before you, a 22-year-old graduate from Michigan State University. I have my bachelors in astrophysics, and in the fall I will begin a doctorate program at the University of Texas. I no longer fear that I will be too young to work on a US space station, but rather that I will be too old. Knowledge has tempered my dreams, and as I look ahead, I hope to someday work as a professor at a research university. I’ve been lucky to have advisors who involved me in research, and I want to provide future astronomers with the same chances I was given. Unfortunately, I don’t know if the resources my advisors had will be available to me.

“I was lucky enough to be paid to work at MIT’s Haystack Observatory while in high school, however, even in 1992, money was scarce enough that I could only be paid during the school year. As the years have passed, finding funding has become harder. At MSU I worked a year before money to pay me became available. Now, as I enter graduate school, I’m considering moonlighting as a programmer because the researcher I want to work for may not have funding to pay me.

“Without the ability to allow students to taste the thrill of discovery young, as I did, many will never learn an appreciation of science, and good students will enter nontechnical fields. Without continued funding now, current college students will leave research for the more lucrative field of computer science and finance. With the forecasted 50% of current professors retiring by 2010, it is dangerous to lessen our efforts to recruit people into research fields. If too many are lost, who will be left to carry science into the next millennium?”

I went on a hunt for this talk after my “I shall write Congress” moment last Friday. I didn’t feel like my letters had any meaning, and all I wanted to do was speak just one more time before the men and women who have the power to decide my future. I’m so glad that I kept these words. They are no less true today then they were then. We I spoke those words so many years ago, Sen. Glenn responded by telling me – telling everyone – in his closing remarks that it was important for all of us to remember to speak from the heart because all the facts and figures and foam boards of charts would be forgotten/ignored while passion would leave an impression. After the forum was over, Glenn wrote the message above to me and I have kept it on my wall at work – the place where it is easiest to lose heart and to think of going into high tech. It hangs there so I see it the moment I walk through my door so that maybe, on the days I most want to give up, it will remind me too keep fighting and to use my message to try and make a difference.

That last paragraph of that speech… What I didn’t know at 22 was that when 2010 came the economy would have collapsed; that many faculty would put off retirements and many universities would suffer hiring freezes. This has led to increased class sizes, and terrible space and infrastructure crunches that make effective work more difficult than I imagined it would be. The difficulty we face is two-fold. On one hand, there is a shortage of technologically trained masses for the commercial markets and tech companies must lobby for increases in the number of H1b visa so they can hire foreign nationals with the tech educations they can’t find domestically. On the other hand, as I look at the job market for those of us with the most advanced degrees seeking to work in basic research and academia … there are job market of at most a few tens of openings every year in my field.

On May 21-23, I’ll be Washington, DC. The legislature will be in session. Today, rather than writing the legislatures I’ll be seeing what I can do to set up some congressional visits. I don’t know where to start but I know how to Google. I feel that it’s important to at least try to speak truth to power.

And, at 38, I am perhaps still to young to be an astronaut… Chris Hadfield is 53. 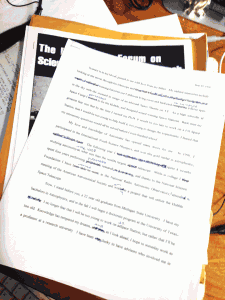 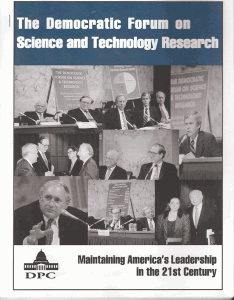 Cover of the report produced by the forum.