If you want to know why women leave STEM, look at how you treat us and look at the messages you tell us.

On January 19, 2005 I arrived to work at the Harvard University Science Center to find myself face to face with a wall of news trucks and a sidewalk of media cables. All along Oxford Street, journalists had gathered to react to the pomp and circumstance that surrounded a speech given by then university president Lawrence Summers. The previous day in a talk at a conference on women and minorities in science and engineering, he’d explained that the reasons there are so few women in science are: 1) women are reluctant to work long hours because of childcare responsibilities, 2) boys outperform girls because of genetic differences, and 3) the hiring pool of women is small (explaining that it’s unclear if the size of the pool was held down by discrimination. Under Summers tenure, the rate of women being offered tenured positions dropped from 36% to 13%. [reference]

In the months that followed, some demanded Summers firing. That didn’t happen.* Some tried to defend what he said as being as good as any other theory out there. That happened a lot actually. A few tried to start a research-based discourse on why women aren’t in science (and engineering/tech) in representative numbers. That happened in small venues without cameras.

In 2006, as I started doing more and more survey based research, I learned a lot about bias. It’s actually really easy to make a woman fail. Thanks to stereotype threat (which works against minorities too), all you have to do is tell a woman that women are poor at math and science, and her scores will drop. You don’t even have to say it. Just look a female student up and down – scoop out her body – and her capacity for success falls away. [ref1 ref2 ref3]

And… if you allow the person reviewing her work to know her gender, they’ll also score her worse when there is space for qualitative judgement. [ref1 ref2 ref3]

The problem of subjective evaluation and being systemically downgraded extends past the classroom. Women earn 20% less [ref]. They are selected for fewer awards [ref]. They are asked to give invited talks less often.[ref] … and I see the proof every time I write a grant budget (or read someone else’s) and go to a conference with award and invited talks.

And then… in 2010 the public discussion of the outright harassment began. How many hashtags have been used and abused as we try to discuss our experiences only to be attacked? The latest fashion seems to be doxxing women – putting women’s personal details out in the public (and often also threatening them with rape and violence) – whenever they speak up. This goes side by side with 1) condescending and snide remarks from famous men like Richard Dawkens who work to place the blame on women who are actually raped [ref], and 2) comments from all sides that “boys will be boys” when the exploits of the famous are revealed.[ref][ref]

And now… we have #gamergate. We have women receiving death threats and threats of gunman creating a massacre if they speak.[ref][ref]

We are bombarded with the Q “Why do women leave STEM?” In the last wk we have 1.) dehumanization of transwomen on the cover of Science // 2.) Studies showing how prevalent it is for women to receive inappropriate sexual comments from superiors while conducting work // 3.) minimizing the impact of a famous scientist’s sleeping with grad students’ significant others because of his contributions to sci 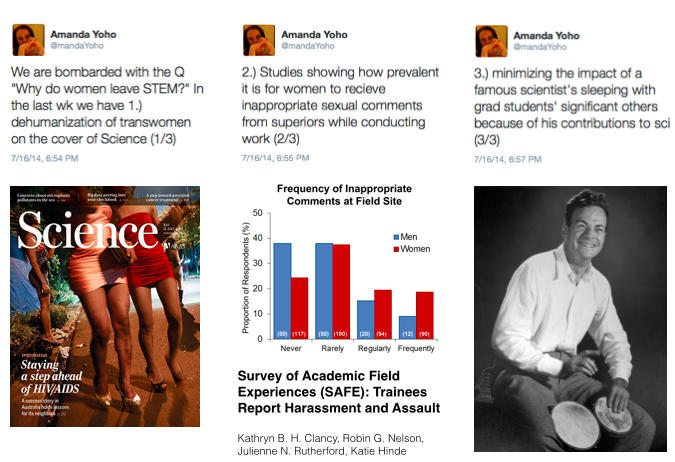 The take away I got from all of this is if you are a famous male you can get away with anything up to and including rape and know that other men have your back and the women you abused will have to defend themselves and hide from a new round of abusers. Meanwhile, it’s totally fine for even science journals like Science to use the sexualization of women to sell, and… statistically inappropriate sexual comments and actions is really just par for the course.

I’m tired. I’m tired of knowing I have to be in the top few percent of everything I do just to get to stay in the game while men have it a little bit easier with paychecks more than a little bit larger. I’m tired of knowing men can abuse me verbally and physically and unless criminal charges are placed… nothing is probably going to happen other than me binge eating chips and salsa while sitting with insomnia at my keyboard (and that only hurts me).

And I’m tired of knowing that those two factors together mean that for the rest of my life I’m going to have to always fight to be in the top few percent just to stay competitive with the top larger percentage of men, and I’m going to have less time to do it because of the time I spend fighting harassment (and when I don’t have it left in me to fight, I’ll still be at the keyboard with insomnia).

Why do women leave STEM? At the end of the day, we look at history and realize just how unfair the world is, and we look down at our breasts and wonder how long it will be before someone grabs them again, and then we look at the door and ask, “What if?”

I’m still here. I’m still fighting. I’m going to keep fighting until I’m completely defunded. What I need is that magic box that gives me a power up and lets me get to the next level.

I’m going to keep fighting, keep working mad 70-hour weeks, and keep trying to find new ways to bridge the public and professional scientists so we can get more astronomy done. I’m going to keep innovating technologies, and I’m going to keep writing grants to keep myself and my staff funded. … and I’m also going to keep owning pitbull mixes who sleep beside me and bark at anything that moves.

I’m still here. I’m still fighting. But I’m so tired, and I understand why women leave.

*Summers resigned in June 2006 after a non-confidence vote of the Harvard faculty. This occurred after public disputes with socialist philosopher professor Cornel West and after financial conflict of interest questions arose with regards to his relationship with economics professor Andrei Shleifer. Summers went on to become the Director of the National Economic Council.