The problem with “Unbelievable”

Lately, I’ve heard a lot of people say, “Did you see? Isn’t that so unbelievable?” These words have usually been uttered in reference to media coverage of authority figures acting in sexist, bigoted, racist, or otherwise intolerant or amoral ways. Basically, when members of the establishment fuck up, people want to label it as unbelievable.

But, unfortunately, these things are really the norm.

The last time someone said this to me (in reference to the horrible Dear Alice column discussed here), it was a senior white male I like and respect and learn from and trust, and I finally said what I’ve been thinking every time I hear those words. I said, “No, actually, it’s not unbelievable. It’s kind of normal. I’ve seen this kind of behavior my whole life.”

This is a problematic exchange on both sides. When someone says, “That’s unbelievable,” what I hear is “This thing must either not actually be true or it is so rare that it’s statistically improbable.” This has a silencing effect. If examples of authority figures acting poorly is unbelievable, how can people without power step forward when they are harmed and how can they call out the abuse they deal with? On the other side, when I point out, “This horrible thing you just learned is happening – it’s actually kind of normal,” I am actually saying, “You know, you have been completely blind to the abuse people around you deal with daily, maybe you should work on that.” It takes a special person to not respond defensively or to not at least back away the from the situation and calmly go back to safe ignorance.

This is a no win situation.

This is also reality.

Let me take this moment to review the situations that have risen high enough on society’s radar to become main stream news in just the teeny tiny field of science. I could write a much longer list if I talked about the horror that is how blacks are treated in the US, or about reproductive health issues, or LGBTQ issues, or … or … Yeah… I’m going to restrict myself to just the big stories in science.

Now these are just examples – anecdotal evidence if you will – each one more unbelievable than the others.

There’s that word. What does it take for this to be believable, but wrong and reason for censure?

I’ll admit anecdotes aren’t a replacement for data. Unsurprisingly, there isn’t a lot of data documenting how often women are subjected to (dare I say) crap as extreme as the above (because it’s unbelievable, so why would you study it?) What there is research on is how gender plays a role in making it harder for women to succeed at every step in an academic science career.

So here are the data driven facts for women in science: the tests we take to get into grad school are gender and race biased (Nature.com, APS); 26% of women (versus 6% of men) are sexually assaulted by colleagues while doing field work early in their career (nature.com); when it comes to hiring, men are preferentially selected (PNAS); papers are less likely to have female first authors (Chronicle of Higher Ed) and when the first author is female, they are less likely to be cited/respected (Science Daily); when teaching, students downgrade female professors (summary at Washington Post); in academia, where tenure defines success, women are less likely to “make it” (stats at aas.org); when it comes to invited conference speakers, women are underrepresented (stats for astronomy); and women are less likely to be awarded for their excellence (SAGE). There is more. I could keep going. It turns out I don’t hate myself enough to do that. Reading these papers is soul crushing.

The situation only gets worse when you look at issues faced by people of color, and for LGBTQ and disabled community members. In many ways, us “~able bodied, white women who are in relationships with men” have it easy.

Ok. Can we all agree, all this stuff is believable? Kind of normal even? And maybe in need of fixing?

I was inspired to write this because of a couple things I’ve seen on twitter lately. There was Katie Mack‘s tweet, of the David Morrison quote  “The standard you walk past is the standard you accept” and the naive tweet I received from @mortimezilch, stating “STEM careers arent being chosen by capable females: because of cultural influences. Fems r 2 complicit.” I could have walked past that comment, I could keep walking past all the times someone says “unbelievable” to something that I know is the norm. I could keep walking (and get more work done, while hating myself). Instead, I’m trying to figure out how to take a stand.

Women (and minorities, and the not able-bodied, and… anyone out of the stereotypical norm) are not choosing to leave science because we are being complicit and conforming to cultural influences. We are leaving science because we can’t always out perform at a sufficiently high-level to be competitive when our handicap is so high, and when we are competitive, we don’t always stay because we don’t all like being harassed and sometimes even molested. Not wanting to be abused is a pretty solid reason to leave.

And people leave. I see women leaving every semester.

In a moment of thoughtlessly not checking my privilege as much as I should have, I piggybacked on a tweet by Chanda Prescod-Weinstein.  She’s right; if the horrifyingly small number of minorities in physics and astronomy left (the ones not named Neil deGrasse Tyson), it likely would actually go unnoticed. Women have it better. As Chanda correctly pointed out in a subsequent tweet, there are senior white women who would notice. But, as a study by Millie Dresselhaus at MIT pointed out in 1994, the women who left would probably hear the academic equivalent of “Don’t let the door hit you on your way out.” (see 1994 MIT study highlighted here). While this sucks, at least we’d be noticed.

Academic science shouldn’t be driving out all the faces that don’t fit the stereotype.

We need to do better.

The academic community is guilty of harboring people who actively act in ways that create hostile work environments for women and minorities of all kinds. Many of us pretend it doesn’t bother us and we laugh at the jokes to try and fit in (but this does harm to us). Women are advised to keep quiet (I know of one who was advised by HR at a Major University to not report), because they can’t win against senior men and if they “make trouble” it will just close doors for them (truth). Men are apologized for, and I’ve only ever seen one man face real consequences, and that one man (who did fairly unspeakable things, but “does excellent research”) was told, “We’re going to seal the record on this horrible thing and give you time to go find a new job, and not tell your new job about this horrible thing, and we’re going to make sure no one else is allowed to speak about it either.” There needs to be real consequences. If you are someone that every female student will be pulled aside and warned not to be alone with, maybe you shouldn’t have tenure as a teaching professor. If, for example, you make it clear students are expected to sleep with you (or at least let you grab some tit and ass) if they want their degree, maybe you should be outed and banned from the profession. These are real examples folks. This happens, but it shouldn’t. We need a professional academic community where we actually expect professionals to not just do good research, but to also act like the professionals HR manuals describe.

We can do better. But it means we need to stop walking.

My call to action is this: Do not keep walking when someone says or does something that isn’t a standard you can accept. Make your stand or at least find the person near you willing to be your advocate and make that stand for you. If you are a person in authority, make your stand have teeth and work to appropriately censure those who act out within our professional community. We need to stop punishing the abused, and instead make it clear we won’t accept “but s\he does good research” as an excuse to allow harassment any longer.

edit 1:44am 12 June: Sarah Tuttle has a brilliant response to Tim Hunt’s comments on Twitter. It has been storifyed here.

edit 1:50pm 12 June: Taka T pointed me to this summary of “The Most Boneheaded, Racist, and Sexist Comments From Nobel Laureates” over on Slate. 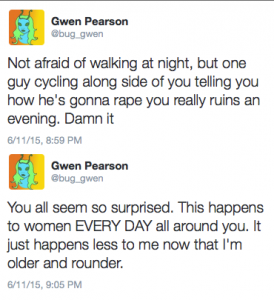